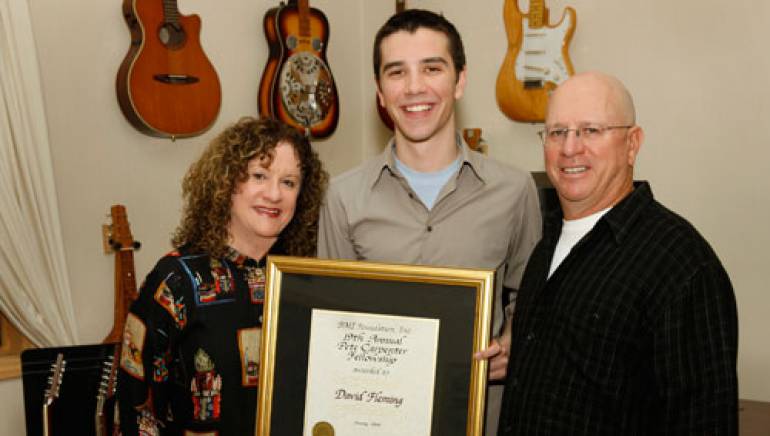 Composer David Fleming, along with previously touted honoree Bryan Senti, was selected as the 2007 recipient of the 19th Annual BMI Foundation Pete Carpenter Fellowship. BMI Foundation President Ralph N. Jackson originally announced the winners in May 2007, but due to the recent writers’ strike, Fleming’s visit and award presentation was postponed until this year. The Fellowship is open to aspiring film and television composers under the age of 35 and was established by the BMI Foundation and Carpenter’s family, colleagues and friends in honor of the late composer, whose credits include such television themes and scores as The A-Team,Magnum P.I., The Rockford Files, Hardcastle and McCormick, Hunter and Riptide.

Fellowship winners are given the opportunity to intern with renowned BMI composer Mike Post in his Los Angeles studio and meet with other distinguished theatrical, film and TV composers. Post, Carpenter’s longtime writing partner, has penned some of the most memorable theme songs in television history, including Hill Street Blues, The A-Team, Magnum P.I., NYPD Blue, Law and Order, L.A. Law, The Rockford Files, Quantum Leap and City of Angels. A stipend for travel and living expenses is also part of the award.

David Fleming first became involved in composition during his high school years in upstate New York. While writing a piece for a friend’s video project he realized he had a particular interest in scoring to visual. After high school, David was accepted into the Studio Composition program at the music conservatory at Purchase College, where he recently finished his junior year. At school he has concentrated on composing for film and television with Emmy award-winning composer Allyson Bellink. This past year he also earned an internship at Eargoo, a Manhattan-based company that specializes in original music, sound design and general post-production for commercials. Outside of school and work, David enjoys recording and performing with his band, The Locomotive Espada.

The BMI Foundation, Inc. is a not-for-profit corporation founded in 1985 to support the creation, performance, and study of music through awards, scholarships, commissions and grants. Tax-deductible donations to the Foundation come primarily from songwriters, composers and publishers, BMI employees and members of the public with a special interest in music. Because both the Foundation staff and the distinguished members of the Advisory Panel serve without compensation, more than 97% of all donations and income are used for charitable grants.