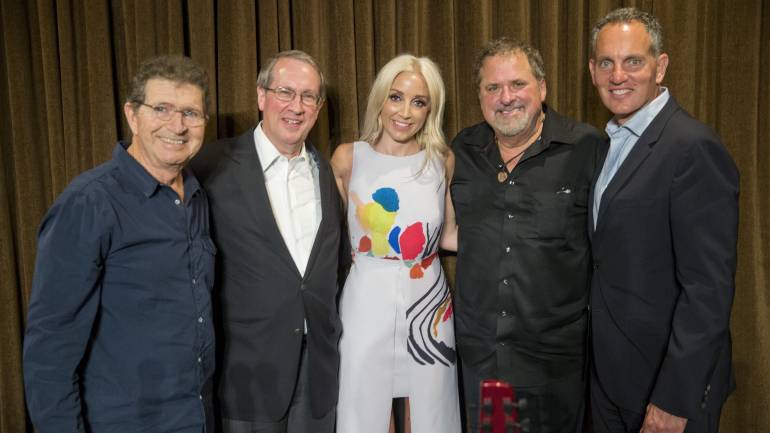 Broadcast Music, Inc. welcomed Congressman Bob Goodlatte (R-VA) (@RepGoodlatte), Chairman of the House Judiciary Committee and one of the first supporters of copyright law review as it relates to music licensing, to its Nashville office on July 16 to meet with several talented BMI songwriters and experience their music in an intimate guitar-pull setting. Legendary country songwriter Mac Davis, acclaimed singer-songwriter Ashley Monroe and country hitmaker Bob DiPiero each played several songs, told the stories behind their music and shared their heartfelt journeys and struggles as songwriters in the digital age. Also in attendance was Jessica Roadcap, a rising songwriter hailing from Virginia’s Shenandoah Valley, who now calls Music City her home.

In a roundtable discussion, BMI President and CEO Mike O’Neill, BMI Senior Vice President, Global Policy, Ann Sweeney, and other BMI executives spoke to the Congressman about the challenges music makers are facing today and the critical need for updates to copyright law.

During the evening, BMI had the opportunity to chat with Congressman Goodlatte about his interest in helping songwriters, the importance of music to our economy and how he views the relationship between music creators and technology.

A Conversation With Congressman Bob Goodlatte

“What we do to promote a better legal structure … can play a key role in helping songwriters and others reach the audience they need to reach and be fairly compensated for their creativity.”

Congressman Goodlatte, as Chairman of the House Judiciary Committee and a leader on Internet and intellectual property matters, you’re well aware that American music makers are facing challenges in the digital age. You were one of the first supporters of copyright law reform as it relates to music licensing. What initially drew you to helping music creators?

Well, I’ve had the opportunity to meet a lot of people in the music industry - performers, songwriters, people who are in the music business as well, and it’s fascinating to me. Something that I am sure I have a lot to learn about, but one of the things I understand about music, movies, software, almost any kind of digital creation, is that there are a lot of people that go into making it happen. It isn’t just the performer, or the video or whatever you see on the screen, and it’s necessary to make sure that everybody is treated fairly in the process. And the fact of the matter is, our copyright laws haven’t been reviewed in a comprehensive way in 40 years. So when I became Chairman, I announced that I was going to do a complete review of our copyright laws. We spent two years doing that and we just completed it. We learned a lot from it. Held close to 20 hearings, close to 100 witnesses from every sector of copyright, including many in the music industry.

How important is America’s music industry to our economy?

I think it’s very, very important for a lot of reasons. First of all, music, if it’s not in the foreground, is definitely in the background of our lives, constantly in ways that we don’t always notice. Whether it’s a great motion picture or a television program, whether it’s the advertising that we are watching, or the music that you go to hear at a local venue, or maybe the music that you didn’t go to hear but you do hear when you’re at a restaurant or some other place. You don’t go to a baseball game without hearing music; you don’t go to virtually any kind of sporting event [without hearing music]. You don’t turn on the radio without hearing it or your television set, your computer without hearing it. It holds a big place in our lives, but it’s also a big part of our economy in terms of the number of jobs it has created and in terms of its ability to tap into that great talent. And it’s a very important export that we send around to the rest of the world. I am sure we import a lot of good music, too, but the United States is probably the most prolific country for the creation and distribution of popular music around the world. So it not only creates jobs and brings dollars in and helps with our balance of trade - where in other areas we are importing manufactured goods from elsewhere and not manufacturing enough here, so it helps to offset that - but it also helps to create the image of America around the world. People don’t listen to things unless they like them, and if they like them and know they are from America, it helps us.

How does that translate legislatively to protecting intellectual property and copyright?

Now that we’ve done the copyright review, I am going to go back to a process that I followed when I was a relatively new member of Congress and Congressmen Henry Hyde was Chairman of the House Judiciary Committee. He brought various interests together to help write the digital millennium copyright act, which was an important reform tool and provides some protection for the creative musical and motion picture, television, and software works to be able to be made available to people online in a digital format. By bringing these parties together, it helped them to better understand their concerns and their needs. That was quite a few years ago and more work needs to be done in that area, but more work needs to be done in other areas related to music licensing and other copyright issues. So we are now in the process of evaluating what we learned in the past two years to start the process of bringing people together to determine what areas of copyright law are ripe for new legislation.

Does innovation in technology have to come at the cost of music creators, or is there a balance that can be struck going forward?

Well, I think that there is a great synergy there. I think both people who create great works and people who find new ways to distribute them need each other. You can have all kinds of new technology and if they don’t have great, new, exciting music and motion pictures, and videos, whatever people are interested in, books, available for those new formats, then they aren’t going to grow as aggressively. Similarly, done right, these new avenues to reach consumers are a great thing for people who write music, for people who create the kinds of entertainment and education and information that people want to have available to them.

Can you describe the benefits copyright reform would bring to stakeholders, from music makers, to digital businesses, to music fans?

I think the most important thing is when people have an agreement on what is a fair way to trade their goods. In other words, people who write great music, people who publish it, people who distribute it, they’re doing that in exchange for getting payment from people who need that for various purposes and want to deliver it to the public. When they have an agreement about how to do that, it creates, again, a synergy that helps to grow the whole economy around the entertainment industry. As a result of that, what we do to promote a better legal structure, and a better environment in which this can take place, can play a key role in helping songwriters and others reach the audience they need to reach and be fairly compensated for their creativity.

Lastly, how optimistic are you about making progress in this Congress?

I am quite optimistic. I think there is a lot of interest from a lot of different parties to work on this and most people know that when you’re operating under consent decrees that are 50 or more years old, when you’re operating on laws that were written 40 or more years ago, and at the same time you have a new technology which has come to the fore only in the last year or two, that there needs to be attention paid to this by the Congress. There are a lot of members of Congress interested in this and a lot of people who want to have their voices heard in the process of writing the laws, and that’s what I think my role is - to make sure that all those people have an opportunity to participate in this decision-making process.

Find out how you can join the fight for fair royalties for songwriters.