Posted in MusicWorld on July 10, 2009 by Jon Burlingame 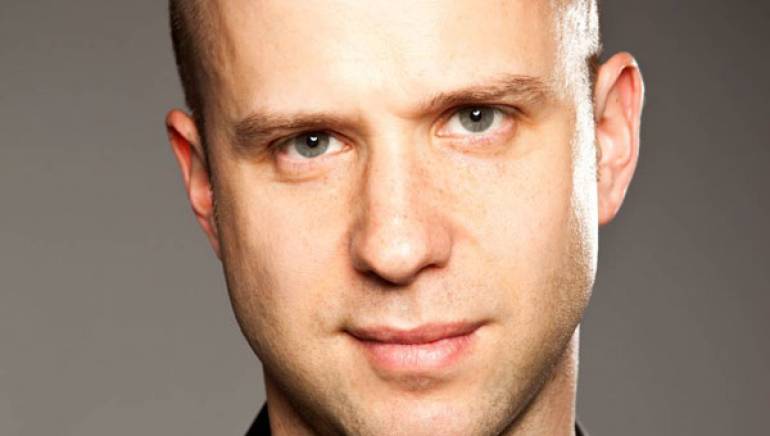 From the upbeat, jazzy sounds of The Devil Wears Prada to the jungle-adventure send-up of Tropic Thunder and the sentiment of last year’s hit Marley & Me, composer Theodore Shapiro has consistently delivered memorable music for some of the funniest movies of the past five years.

But in a corollary to the old acting bromide “dying is easy, comedy is hard,” Shapiro steps gingerly when adding music to the antics of a Jack Black, Ben Stiller or Owen Wilson: “If you’re ever making a gesture that gives the audience permission to laugh, you have to be very judicious with it,” he explains, “because the worst possible thing you can do is to push the comedy too hard.”

His careful touch has made him a sought-after collaborator for some of Hollywood’s leading comedy directors: David Frankel (Prada, Marley), Stiller (Tropic Thunder), John Hamburg (I Love You, Man, Along Came Polly), Mike Judge (Idiocracy) and, most recently, Harold Ramis (Year One).

Shapiro, 37, is a rarity in modern film music: a classically trained composer (bachelor’s degree from Brown, master’s from Juilliard) who, despite commissions for classical works (including a well-received piano concerto in 1999), decided he’d rather be working in film.

“A lot of the seminal cultural experiences of my life were in the movie theater,” he says during a writing break at his comfortable Glendale, Calif., studio. “As a 9-year-old boy, ‘Raiders of the Lost Ark’ had a major impact on my life. I’ve always been very connected to the medium.”

Shapiro followed the usual route for a fledgling film composer: low-budget, independent films, often made by friends, one of which, Karyn Kusama’s Girlfight, won major awards at the Sundance Film Festival and led to a two-film collaboration with celebrated playwright (and sometime film director) David Mamet, on State and Main and Heist.

Director Todd Phillips liked Shapiro’s thriller score for Heist and hired him for his 2003 comedy Old School. Its success, in turn, led to Shapiro’s current status as Hollywood’s go-to composer for edgy comedic fare: Starsky and Hutch, Dodgeball, Fun with Dick and Jane and others.

But it’s never simple, Shapiro says. “If the movie works, it’s because there is something emotionally satisfying — and if you don’t get that part right (as a composer), then you’re going to hurt the movie.” For the hit Meryl Streep-Anne Hathaway movie The Devil Wears Prada, for example, “a portion of the score had to do with the energy and excitement and glamour of the fashion world. But an equally large and important aspect of the score was about the main character’s self-actualization and growth.”

The Will Ferrell ice-skating comedy Blades of Glory demanded “an epic sports score,” Shapiro noted, while Tropic Thunder — set in Southeast Asia, where actors making a movie are caught up in real wartime action — required “the orchestra, a rock band, ethnic specialists, vocal soloists and taiko drum ensemble. We played it completely straight,” he points out, which only added to the fun.

And when it came to one of last year’s biggest hits, the dog-centric Jennifer Aniston-Owen Wilson comedy Marley & Me, the balance was even more delicate because of its much-talked-about finale. “The emotional wallop of the movie’s last third simply didn’t exist before Teddy composed the gorgeous, elegiac theme that carries the film to its bittersweet ending,” says director Frankel. “Teddy’s range as a composer is astonishing, but even more valuable is his ability to capture perfectly the emotional rhythms of a film.”

This summer’s Shapiro scores include I Love You, Man, which needed just five minutes of original music, and Year One, the Jack Black caveman movie that needed much more, but also a more primitive soundscape featuring brass, percussion and harp. Upcoming is a reunion with director Kusama on Jennifer’s Body, a horror-comedy written by Diablo Cody (Juno).

Says Shapiro: “I’m excited to come to work every day. I enjoy the craft of film composition. I just want to keep challenging myself and having the opportunity to work on movies that I really love.”