Posted in Blog on February 1, 2013 by Christopher North 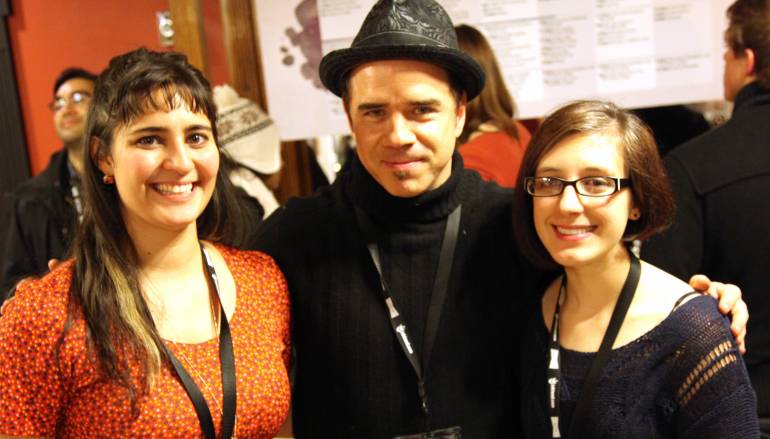 What a fantastic blur it’s been, from initial spotting session to best documentary at Slamdance, all in a month.

I first met director Nicole Teeny at Doreen Ringer-Ross’s panel, “Sewing the Story Together with Score,” during the 2012 IFP Filmmaker Conference. Since attending my first IFP (upon suggestion by BMI Film Scoring Workshop’s Rick Baitz) I’ve met countless filmmakers and ended up working with at least one new collaborator per year thanks to its panels, screenings, parties and related events. Last September, Nicole and I chatted about her film and exchanged info. Her documentary (and first feature), Bible Quiz, was a four-year project inching closer to a polished cut.

At just about the same time as Bible Quiz’s acceptance into Slamdance, I sent an “it’s been a while, just checking back with you” email, which landed at the right time. We were in sync. I had just finished another film. We met with editor James Codoyannis on December 16th. What started off as “we need a main theme with variations in a few spots” very quickly morphed, upon sharing of ideas and logistics of obtaining rights for temp score tracks, into “I think we need the entire score.” (What I did not know then was that this would be one of only three meetings with the composer and director in the same room.)

There would be challenges: Getting to know Nicole and the film fast, the hustle-bustle of the impending holidays, and travel—Nicole was leaving for three-week excursion to Asia and wouldn’t return until the day of the mix session—all added challenges. There was another deadline. Ignacio Prego, a harpsichordist acquaintance of Nicole’s, was only available to record on the Saturday evening before Christmas. I’d delivered a bunch of themes in that first week, but had not yet arrived at an approved main theme. I prepared some charts of stuff that seemed in the ball park. I knew harpsichord would be an interesting underscoring sonic complement to all the religious subtext in the film. (I was intrigued by the notion of him playing non-idiomatic music to accentuate the quirkiness of the characters and hopefully resonate with the heart of the film. For example, riffing on a jazz tune or pounding out “teenage love”-inspired pop music played with lots of improvisation.) Sure enough, about 10 of the 30 minutes we captured made it into the film. As for the rest of the 35 minutes of score …

It took a while to sort out work flow, especially in regard to scheduling meetings (via Skype) with a 14-hour time difference. We used Dropbox and Google docs (including a score map and feedback form) to keep sketches, drafts, comments and revisions organized. And, oh yeah, one more challenge: I had knee surgery two days before the mix, which was set for January 13th. Nothing like drug-induced rest for a sleep-deprived composer. Mix session looming, there were still eight or so of the nearly 40 cues that really needed “in the same room” collaboration and tweaking. We started at 8am and knocked them out, commencing the mix at 2pm, and by 11pm… The film was done and off to Slamdance.

Bible Quiz premiered on Friday, January 18th, followed by Q&A with Nicole and star Mikayla Irle. The screenings went very well, with lots of praise and laughs. A buzz was building around our baby. It was all so very exciting, especially because this was my first time to Park City. I saw amazing films at Sundance and Slamdance, happened upon very festive parties, and a big highlight was the incredible composer/director roundtable hosted by Doreen, followed by the BMI Snowball.

On Slamdance’s award night, several of the film’s crew and I were en route to the airport for the redeye back home when we got the news: Bible Quiz wins Best Documentary! I don’t think I’ve ever experienced anything close to exhilaration when standing in a security line before.

Thank you BMI, IFP, Slamdance, Sundance and Doreen. Sewing the Story Together with Score with Nicole, indeed. We did it (although only actually together for three meetings). I can’t wait for next year, only in 2014, I’ll ski. (My knee is on the mend.)