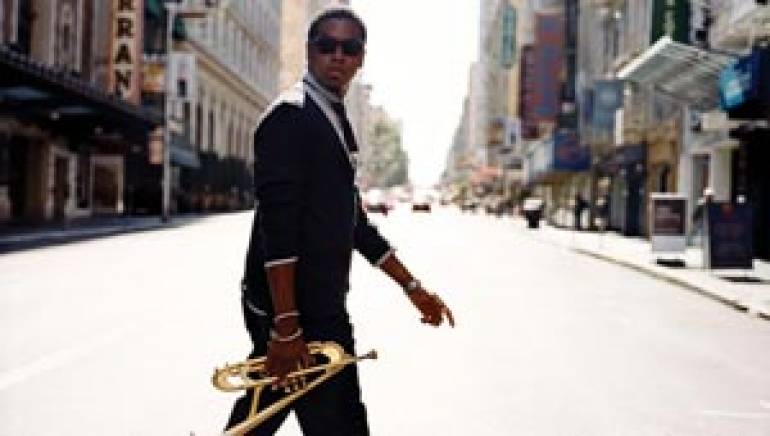 Two stories explain the title of jazz trumpeter/composer Christian Scott’s fifth solo release, Yesterday You Said Tomorrow. Officially, it’s a line Scott and his twin brother heard from their grandfather as kids in New Orleans. If they didn’t finish the extra homework he’d assigned, he’d remind them, “yesterday you said you’d do it tomorrow.”

In that context, it evokes a family of high-achievers, and Christian Scott certainly embodies that. Scott began playing professionally with his uncle, jazz saxophonist Donald Harrison, at age 13, was recording on Harrison’s albums at 16, and at age 20 had released his own debut—all while touring, composing and completing two degrees at the prestigious Berklee College of Music in just two years.

But behind Scott’s precocious talent and prodigious drive lies a social consciousness and frustration with the slow pace of change. In that sense, Yesterday You Said Tomorrow is a challenge to get busy fixing the world’s social ills. After all: yesterday we said tomorrow.

“When I started, everyone said you couldn’t mix jazz. So up to this point I was interested in marrying different genres people said weren’t compatible,” Scott explains. “But then I noticed the same ideas people have in regards to musical genres are prevalent in different cultural and societal situations as well. There’s this concept of ‘the other,’ not intermingling or inter-marrying. And I started noticing a whole slew of dilemmas that had been superimposed on different people, different demographics and different cultures.”

Scott first explored social justice on his 2007 release Anthem, which addresses the inequities revealed by Hurricane Katrina. Yesterday You Said Tomorrow expands on these themes, with compositions inspired by such issues as racism, abortion, and gay marriage.

Scott eschews the word political. “Politics deals with the dissemination of power between people. I am not interested in that,” he declares. “I’m just speaking about problems in our social structure, social dilemmas. This subject matter is something I’m not afraid to speak out on. No one else in jazz is really speaking out on things they see on a daily basis right now.”