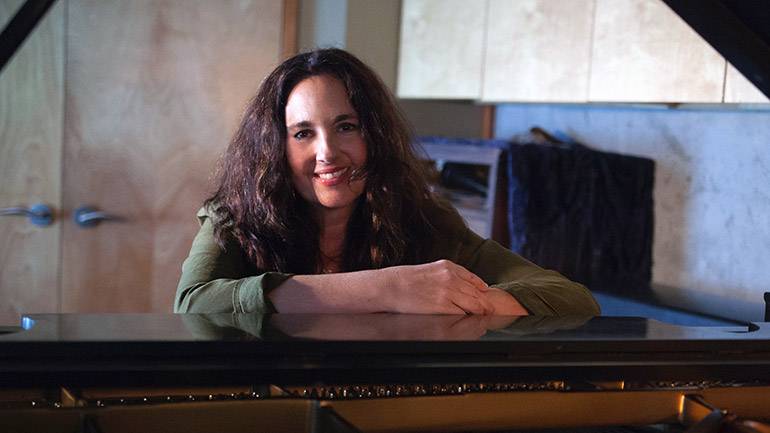 BMI composer Starr Parodi has pursued an active career as a music creator since getting her start in the late 1980’s. A versatile pianist, the Los Angeles-born Parodi honed her musical chops playing keyboards in a wide variety of bands, playing everything from rock, pop and soul to Gospel, jazz and experimental music. The opportunity to play in comedian/talk-show host Arsenio Hall’s house, The Posse, in the 1990’s gave the ambitious Parodi a boost in her exposure, leading her to play with a host of other names like Mariah Carey, Whitney Houston, Carole King and many more. But upon meeting composer Jeff Fair, the creative partner who’d become her husband, she started scoring, and started a prolific new chapter.

In the realm of film composition, Parodi’s career blossomed. She composed and produced a wide variety of scores, including titles like The Starter Wife, Women Warriors: Voices of Change, Conversations with Other Women, Transformers: Rescue Bots, G.I. Joe Renegades and The Division. Parodi also actively advocates on behalf of female composers in the creative community and has served as the President of the Alliance for Women Film Composers. All the while, she’s also pursued a boundary-breaking solo career, still regularly performs and has never stopped scoring. BMI caught up with Parodi on the eve of the release of her latest score for the film, The Storied Life of A.J. Fikry, to discuss her remarkable journey and her latest projects. Here’s what she had to say.

The most recent work of yours which the public is going to get to experience is The Storied Life of A.J. Fikry. How did this opportunity come about and what made you want to be involved with this particular film?

Jeff Fair and I had previously worked with the director, Hans Canosa, several years ago on his first US feature Conversations With Other Women, and Jeff and I collaborated together on this film as well. Hans works closely with his partner Gabrielle Zevin, who is a New York Times bestselling author, and they had the opportunity to produce this film together based on Gabrielle’s very popular book. I was thrilled to hear from him again. I love the book, it’s such an emotionally charged story that finds humor and grace in the human condition—all that can go wrong and all that can go right!

I wanted to be involved because I loved the story, admired the director and author so much, and when Hans told me that he envisioned an organic orchestral score that was melodically driven I was excited and completely onboard. The score was recorded with orchestra and chamber group featuring piano, violin, flute, oboe and trumpet soloists and was inspired by the characters, the colors of small town New England, and the seasons of life. There were so many great opportunities for music to play a big part in this film, as several characters tell the story from their perspective in thoughtfully laid out montages. Fikry takes place over a 12-year period as we watch a child grow up and a family come together and evolve, and the music also plays a large role in tying together time periods and supporting the environment in which that happens. I feel so blessed to have been a part of this beautiful project.

You’re a composer, a pianist, a producer, arranger, music conductor and you’ve amassed a varied list of scoring credits for film and television. What, in your mind, is the most rewarding aspect of the scoring process?

To me, collaboration with the filmmakers, with musicians, and with other artists is so rewarding. And the thought that as a composer, we are basically creating something that hasn’t existed before and that hopefully will touch people’s lives in a positive way - that is really exciting and rewarding to me.

How would you describe your creative process?

Even if there will be no piano in the score, or the style doesn’t call for much melody, I like to start by just sitting at my piano — thinking, processing, letting ideas flow and come into my mind and heart, with or without picture . Sometimes I do this while I am walking in the hills as well, and I always have my phone with me to record ideas. From there I work in the studio on CUBASE and more fully form the ideas to match the scene. I like scribbling ideas down on actual paper sometimes and will have many thematic ideas to draw from. I don’t typically start with a tempo grid, but rather like to play ideas into the computer and then create a tempo map that matches performances that I think breathe and feel good. It’s important to me, when working with a filmmaker to make sure the lines of communication are constantly open and that we are developing our creative language together.

There’s so much to be shared on this subject — what I have personally realized is that on an artistic journey, there is really no “there” to reach. It’s all a path of growth and discovery and each collaboration makes that richer.  It’s so important also to come from a place of gratitude, and to make sure not to focus on the belief that external people and situations control our destinies. If we believe that we are responsible for determining our own fate, then being proactive in all that we do can be really powerful in helping to realize our dreams and goals.

You were celebrated, earlier this year, at BMI’s 2022 Film TV & Visual Media Awards with the BMI Impact Award for your contributions to Women Warriors: The Voices of Change. Tell us a little more about your involvement in that project and what BMI’s recognition of that work meant to you?

Women Warriors: The Voices of Change was the dream of conductor/artist Amy Andersson who is a true force of nature.  She envisioned bringing women composers together, initially for a multi-media concert at Lincoln Center, to amplify women’s history throughout the ages as well as to highlight many important social justice causes. She heard one of my pieces “Joy of the Waters” and thought the tone of it would be a great fit for the visual chapter on the 2015 Supreme Court decision legalizing same-sex marriage. She also reached out to me about doing something together with my daughter Isolde Fair, during the chapter on “Parkland,” since the threat of school violence was such a present danger in her life (Isolde was in high school at the time with multiple threats and shut-downs of the school during the year we were working on this).  It was a joy to work on this project and be a part of something so special that I felt so strongly about, and to be a part of this with the other talented and inspiring composers involved (Nathalie Bonin, Miriam Cutler, Anne-Kathrin Dern, Sharon Farber, Penka Kouneva, Lolita Ritmanis) was really an unforgettable experience.  What was meant to be just a concert experience, because of the pandemic shutting down concerts, turned into a documentary film which has received over 25 awards both domestically and internationally and won a GRAMMY in 2022. To have BMI recognize my involvement in this project was very emotional for me, partly because I have been a BMI member since I was in my early 20’s and have made music and scoring my life work. My goal in being involved with all the facets of music throughout my life has always been to bring light through music and so to be recognized as having a positive impact with BMI’s “Impact Award” was the most rewarding & meaningful thing that could have happened. I have always felt very supported by BMI and am so proud and grateful for this honor.

I’m starting to come up with ideas for another film I have been asked to score and will be starting to write some music soon for the next season of the Festival of Arts: Pageant of the Masters live concert/show that I compose for every year. I’ve also started working on my next album.