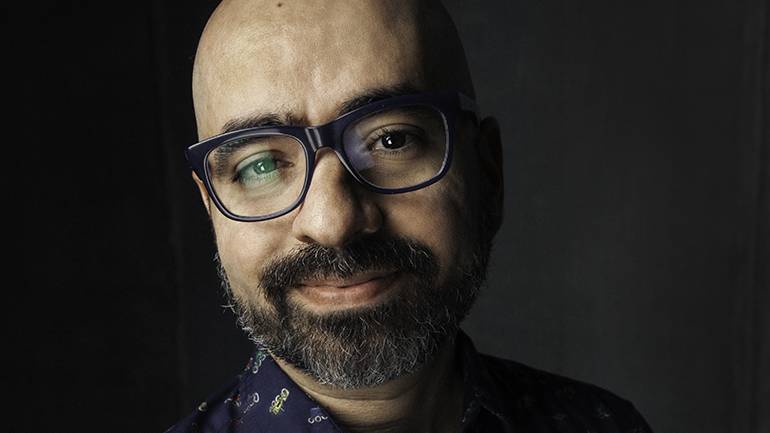 When approaching scoring a film or television project, Venezuelan born composer Sandro Morales-Santoro believes that the story comes first. Building upon the folk and popular music of his homeland — and his studies at the Berklee College of Music — he’ll introduce unexpected instruments and percussion to enhance that story, while always holding true to the director’s vision.

Known for creating lush orchestral scores, Sandro also understands scoring from the eye of the producer after writing and producing the short film Vela with his wife, actress Claudia Serven. BMI caught up with Sandro after his most recent documentary, Explant, premiered at the Tribeca Film Festival. Sandro also shared how he initially found his place in the entertainment industry, the mentors who helped shape his career, and why young composers should treat every project like it’s their “big break.”

One of your most recent projects, the feature documentary Explant, recently premiered at the Tribeca Film Festival. How did you collaborate with composer David Benjamin Steinberg and director Jeremy Simmons throughout a pandemic to create the score for this film?

David and I got started by getting together in my studio and exploring different acoustic instruments and synthesizers to find the right sound palette for this very interesting and particular score. Our director, Jeremy Simmons, had a very specific vision of what the score should be, and in a few words, he described it as a “carnivalesque horror show.” At first, over Zoom, then in person (after being vaccinated), David and I would get together to bounce ideas off each other and jam with synthesizers — creating some weird sounds on my Eurorack — then recording some live percussion ourselves. We played a Mellotron and a detuned grand piano, and I even created some eerie evolving drones with a cello. It was also a great place for me to experiment with South American instruments like the Venezuelan Cuatro and the Bolivian Ronroco.

As you noted, you and Steinberg experimented with multiple synthesizers and other unexpected instruments throughout the creative process. As a composer, how do you find balance in exploring different sounds and instruments while trying to create music that compliments the story or plot?

I believe that the story always goes first. Both the story and the director’s vision on how to tell that story will always dictate what sounds and instruments are used. That’s why I feel we were very fortunate to work on a project that allowed for such experimentation and also a director that encouraged it. It was just so much fun. Sometimes you have to create 10 different sounds to find one that really works for a scene or play a bunch of different techniques on a variety of instruments to hit the right chord or find the right melody that finally cracks it all open. You also have to use time efficiently because it’s so easy to get lost in the creative process of coming up with new and exciting sounds.

How do you foster a strong, collaborative working relationship with another composer when working on a project together?

I think the key for us was to keep the communication flowing and always being honest and straightforward. It’s a conversation — a constant exchange of ideas — and you have to be open to giving the other composer’s ideas a chance. On the other hand, if something is not really working, we often tend to realize it at the same time and no matter whose idea it is, we just move forward on to the next one. In order to have a successful collaboration, you need to leave your ego at the door, and that applies to co-composers as well as just any creative collaboration — especially with a director, since ultimately their vision is the one the whole crew is trying to achieve.

You’ve served as the executive producer and writer on the short film Vela, which you also scored. How did this project affect your approach, being able to experience different sides of the creative process?

Thank you for asking about Vela! Working on it has been one of the greatest experiences in my life. It was a dream come true for my wife, Claudia Serven, and I to shoot a film in Venezuela, and we couldn’t be prouder of the result. To be honest, I had no idea how difficult it was to get a film done. From the concept to writing to funding it then finding the right collaborators, shooting it and then post ... it’s so much work! And anything can go wrong at any given moment. It gave me a whole other perspective of what filmmaking is and what my role as a composer should be. It engraved in my brain the mantra that the story comes first and everything else is secondary; all ideas have to be in service of the story. Music is such a powerful medium that can so easily alter what the audience perceives, so us composers have a responsibility to make sure we understand the story and the vision of how it is being told, so that we can support and hopefully enhance it.

Growing up in Venezuela, do you recall when you first realized that you could write music? Did you have any mentors or teachers who recognized your talent and helped foster your career?

My first tries at writing music happened with a cheap microphone plugged to our home stereo. I would record myself playing on a Casio keyboard and then would try to come up with melodies on my brother’s acoustic guitar. Years later, I studied composition, counterpoint, and orchestration with Angel Balán, whom I consider my mentor and a dear friend. I’m currently collaborating with him on a project. He introduced me to the music of Astor Piazzolla and Ennio Morricone, and also taught me about the richness of our Venezuelan traditional music. At Berklee, I had great teachers like Dennis Leclaire, Michael Farquharson, and Leo Blanco — each one very different to the other as a musician and composer, but I feel they all had an influence on who I was as a composer when I first arrived in L.A.

After you graduated from Berklee, you moved to Los Angeles. How did you find your footing as a composer in a new city while trying to navigate the entertainment industry?

During college and then in Los Angeles, I was very fortunate to become friends with composers who were more experienced and had a lot to teach me like David Benjamin Steinberg, Juan Carlos Rodriguez, Lucas Vidal, Elik Alvarez, and more recently Fil Eisler, Amanda Jones, and Tony Morales. They gave me my first opportunities to write music for film and TV and have always been there to give advice on how to grow my own career. Over the years, I’ve had the opportunity to collaborate with many composers and I always feel I come out on the other side of those projects becoming a better writer and storyteller. This has been key to developing both the musical and interpersonal skills to try to navigate this industry. I’m also an introvert who became somewhat semi-extroverted out of necessity in order to make the most out of any mixer or industry event, and that helped me establish connections and foster relationships with creatives over the years.

You’ve worked on a variety of different genres and platforms, creating music for animated features, documentaries, films, and television series, to name just a few. What’s the most challenging project you’ve worked on so far?

I feel that every project is challenging in its own way. In Explant, we had to find this concept that would feel appropriate for such a complex story, and we knew that it couldn’t be conventional — we had to create a soundscape specific to this project. I recently scored the animated short film The Secret History of Venom for Marvel Animation, and I was over the moon about having a chance of writing music for Venom, who’s always been my favorite Marvel character. But I also felt an enormous, self-imposed pressure of not messing up and trying to write music that my younger self would enjoy when watching Spider-Man on TV. Fortunately, it worked out and it was so much fun getting to record that score with a 60-piece orchestra in Budapest.

What advice would you give to a composer who is just getting started in their career?

Treat every project as if it is your “big break.” Being dependable, respectful, and always delivering your best work is the way to keep being your collaborators’ first call. Every opportunity today, even a super low budget short film, can lead to an amazing opportunity in the future, so make the most of every chance you get. And above all else, don’t forget to be a human being, make friends, and live your life!

I’m finishing a murder mystery feature while getting ready to record a 30-piece choir for a very provocative political satire film by my friend and amazing director Veronica Kompalic. I’m also starting to work on a TV show that I can’t talk much about yet, but it’ll be a fun collaboration with another composer, and I’m even writing songs for this one. And I’m working on the script for a feature film that I hope to shoot in Venezuela next year.

How did you start working with BMI, and how has that relationship impacted your career over the years?

I joined BMI right after college when my dear friend Juan Carlos Rodriguez gave me the opportunity to write some cues for a TV show he was working on. While taking the Conducting Workshop or at one of BMI’s Film and TV Awards ceremonies, I’ve met many composers who I’m glad to call dear friends today. This is a very challenging industry to navigate, and it is very easy to feel all alone in this journey, but those who worked at BMI in the past — and these days people like Reema Iqbal, Natalie Baartz, and Alex Flores — are a great source of guidance and support. They make you feel like they have your back, and I’m very grateful.