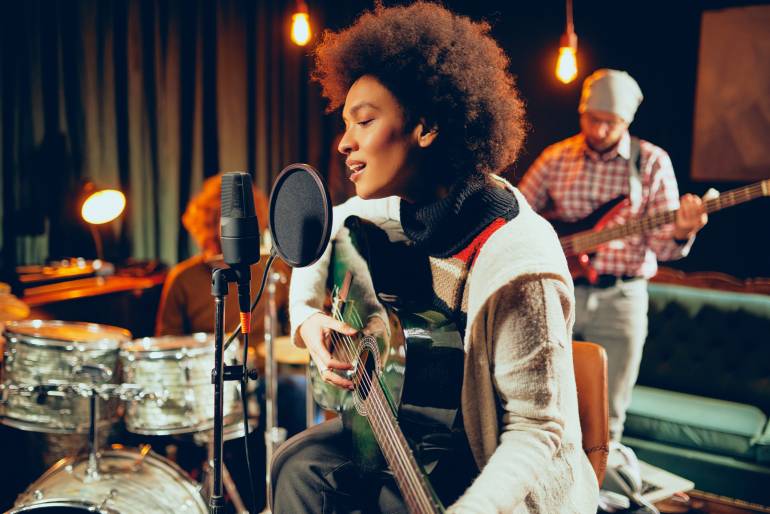 Casting a song refers to making the determination of which artists your song is best suited for. To do it effectively requires an ability to intuit what attributes various artists are likely to be drawn to – melodically and lyrically – in the songs they choose. Just as a casting director’s assessments play a crucial role in the success of a television show or movie, finding the right home for your song can make or break it.

Let’s look at some of the factors that contribute to a song being appropriate for a given artist.

A vocalist’s range can be defined as the span from the lowest to the highest note he or she can sing. You can determine an artist’s range by listening to several of their songs and noting their highest and lowest notes. For example, in her #1 hit, “Cry Pretty” (written by Carrie Underwood, Liz Rose, Lori McKenna and Hillary Lindsey), Carrie Underwood’s lowest note is D#; her highest note is the D# two octaves above.

I’ll share a trick I use to make this easy. When I determine the lowest note in a song, I sing it into my guitar tuner. I do the same with the highest note (which will typically be found in a song’s chorus or bridge). The little flashing lights on my tuner identify the notes.

It’s important to be sure the songs we pitch have a range that is comfortable for the artist we are targeting. If we determine that the artist to whom we are pitching has not sung melodies that exceed ten whole steps (an octave and a third), it is unlikely this artist will be able to sing a song that requires a significantly wider range, such as two octaves.

Conversely, when pitching to artists who have exceptional vocal ranges, we need to pitch songs that will allow them to shine. At a recent workshop I listened to a song that the writer said he hoped to pitch to a long list of female soul singers—singers who have some of the best vocals in the business. He also hoped to pitch the song to a male traditional country artist. The melody was good, but it was neither soulful, nor was it a country melody. With a vocal range of approximately an octave this song offered little opportunity for singers to soar. For additional information on this subject check out my BMI MusicWorld article, “Are Your Songs Too “Rangy” for Today’s Singers?”

When assessing whether a lyric might appeal to a given artist, a little research on the Internet can provide invaluable information about the important milestones in the artist’s life. For example, have they recently married? Ended a relationship? Had a child?

It can also be helpful to learn about the artist’s upbringing. For example, where were they raised? Did they grow up in poverty? Did they have lots of opportunities? Have six siblings? This kind of information can provide insight into the topics an artist might be drawn to.

Songs’ lyrics help delineate an artist’s identity; they allow an audience to believe they know the artist. Therefore, it is important to pitch songs that are consistent with the persona the artist projects. If you study some of an artist’s videos or attend their live show, you should be able to answer some of these questions and tailor your pitches accordingly. Do they present themselves as street-smart? Do they appear to be traditional? Do they tend to sing songs that have a flowery, poetic bent? Do they project sex appeal? Self-confidence? Are they vulnerable?

While every song an artist sings is probably not going to be autobiographical, they are apt to choose songs that reflect events in their life, and songs that are consistent with the persona they choose to project.

Look to the Future

A common pitfall is to pitch a song with a lyric theme that is similar to a song with which an artist has previously had success. Successful artists are constantly evolving, breaking new ground as they take their fans on a musical journey. A look at recordings by superstars such as Taylor Swift, Lady Gaga, and Sting reveal growth, exploration, and development from one album to the next. Few artists will rehash lyric themes or melodic grooves they have already addressed.

While remaining consistent with the artist’s image and genre, imagine what their next step might be, what new lyric angle or unexpected musical approach they might take.

Just as a casting director’s assessments play a crucial role in the success of a television show or movie, finding the right home for your song can make or break it. By taking into account the factors such as artist’s vocal range, the important events in their lives, their background, and projected persona, we can create and pitch material that is well-suited for the artists we target.