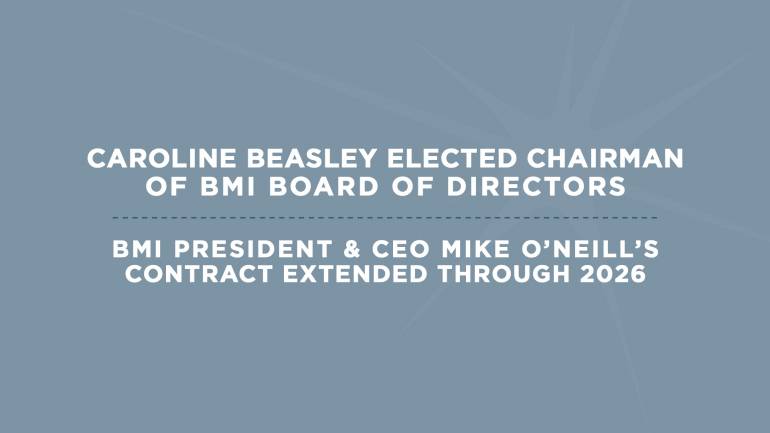 “It is truly an honor to have the privilege of serving as Chair of the BMI Board of Directors,” said Beasley. “Many thanks to Michael Fiorile for his innovative vision, tireless collaboration and insightful leadership over the past several years in his role as Chairman of the organization. I look forward to working together with the Board, Mike O’Neill and the outstanding BMI team to continue to serve the evolving needs of music creators, publishers and licensees in today’s dynamic marketplace.”

Beasley was named Chief Executive Officer of Beasley Media Group, LLC in January 2017. Previously, she held several senior-level positions within the company since 1994, including Executive Vice President, Chief Financial Officer, Treasurer and Secretary. In addition, she has served as a Director of Beasley Broadcast Group, Inc. since she joined the company in 1983.

In addition, the BMI Board of Directors has extended Mike O’Neill’s contract as President & CEO for six years, through the end of 2026.

“BMI has achieved groundbreaking success under Mike’s leadership,” said Fiorile. “During his tenure, the Company set revenue and distribution records year after year, while making significant strides to protect copyright and safeguard the value of music. I, along with our Board of Directors, have no doubt that Mike is the right person to continue to lead the charge towards a modernized music licensing landscape that will benefit everyone involved. He truly leads by example, which encourages the entire BMI team to do their best every day for the songwriters, composers, publishers and business communities we are privileged to serve.”

Under O’Neill’s leadership, BMI has reported its highest-ever revenue and distributions to its affiliated songwriters, composers and publishers. Notably, BMI became the first music rights organization in the world to deliver more than $1 billion in public performance royalties to its affiliates. Additionally, O’Neill spearheaded BMI’s historic victory over the U.S. Department of Justice to ensure the continued practice of fractional licensing. He has also overseen exponential growth year-over-year in both signing up tens of thousands of new songwriters and composers to the Company and processing trillions of performances, adapting to the seismic digital shift in how music is consumed. Most recently, O’Neill has successfully steered the Company during the global COVID-19 pandemic, prioritizing the health and safety of BMI team members while ensuring seamless service to affiliates and licensees and driving historic revenue and royalty distributions.