Posted in MusicWorld on February 18, 2009 by Dan Kimpel 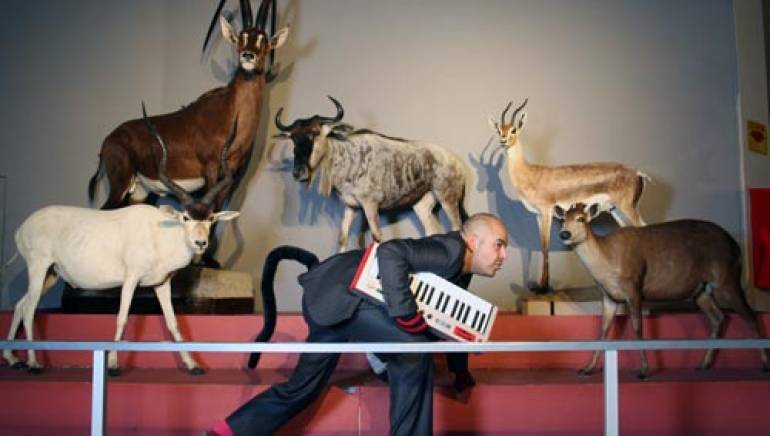 Mexico City is an aural metropolis where everything from punk rock to mariachi merges with the horns of a million aggravated taxi drivers, creating a dizzying soundtrack for the western hemisphere’s most populous capital. The music of Camilo Lara, the artist-producer known as Instituto Mexicano de Sonido – The Mexican Institute of Sound – is equally animated, a cut-and-paste tapestry of quirky and peculiar sounds blended into a hallucinatory sonic consciousness.

Lara has multiple identities: He is a top record executive with EMI Mexico and a music fanatic whose home is packed with more than 35,000 vinyl records and 25,000 CDs. From this archive, he channels Cuban cha-cha-chá, Colombian cumbia and Latin lounge through filters of dub, electronica and old-school samples to achieve his own signature sound.

His newest release, Soy Sauce, expounds upon his eclecticism from the signature beat of the opening track, “Cumbia,” to the jungle birds, cricket samples and bleating barnyard animals of “Te Quiero Mucho” and the jackhammer beats of “White Stripes.” “Alocatel,” remixed by the Beastie Boys’ Ad-Rock, is anchored by fat, analog synths crosscut with roots-reggae rhythms and what sounds like a flock of electrified ducks.

Lara has toured throughout the U.S., appearing at SXSW in Austin, and performing in other cities before traveling to Europe where he has been featured on the BBC. Despite an outpouring of praise from hipster tastemakers worldwide, Lara remains both humble and amused. “It’s all the extension of a big joke,” said Lara in a recent interview. “I never expected this.”