Posted in MusicWorld on November 19, 2021 by Dave Simons 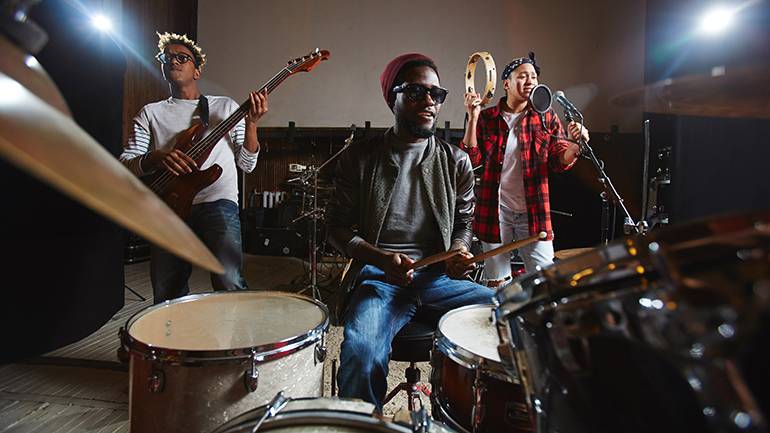 Working completely “in the box”—i.e., using a laptop or other software-base system—certainly has its merits, particularly if your space lacks adequate isolation and you’d rather keep your sounds to yourself. There’s only one problem—your recordings are likely to lack the kind of dimension you often hear on older records that used larger rooms, real effects and multiple musicians playing at the same time. While you could easily rectify a case of the dries using sampled reverbs and the like, from time to time there’s nothing like going for the real thing. Here we offer some practical tips for breathing life back into your recorded work, from cutting foundation tracks live, using a small PA while recording to replicate the feel of a rehearsal room or soundstage, or even just pumping some of your boxed tracks through a speaker after the fact to add some analog-style warmth to the finished product.

Live is the answer

Whether it’s out of convenience or necessity, these days we tend to “build” our demos, one track at a time. Even when bandmates may be handy, many would still rather go about it piece by piece—drummer plays to a click track, drums get edited, on goes a rhythm guitar, and so forth. The rationale is that working this way allows you greater control—should the bass player stumble over a fret, for instance, you can simply isolate and fix the mistake without impacting the other parts. And of course, there are certain kinds of music (techno, EDM) that almost requires a boxed aesthetic.

But whatever your preferred medium, from time to time it becomes necessary to bite the bullet and just record a rhythm track live, with everyone playing (even singing) together, as you would on an actual live performance. Of course, this requires a bit more preparedness on the part of the players (i.e., if the bassist aims wrong, you’ll likely hear that), and also arranging the musicians in a way that allows the sounds to mingle, but not excessively so. Because they’re low-gain and fairly directional, dynamic microphones like Shure’s SM57 or 58 tend to work best for mitigating live leakage; when using a “hotter” condenser mic for drums or percussion, switch the capsule to cardioid mode, which will “reject” sound coming from elsewhere in the room.

I’ll admit that the all-at-once approach can require extra patience and practice before you get it right. However, there are other, less taxing methods for adding depth to your recorded work. For instance, using a basic live-sound system while tracking can give the impression of a much roomier environment than the one you’re using. You don’t need to go overboard—a single PA speaker or wedge monitor can do the trick. This approach can be particularly effective when doing vocals—just set up your studio microphone as you normally would, then situate a second mic alongside it and connect that to the PA speaker. You can adjust the amount of desired ambience by placing the speaker in different positions, from directly below you to the other side of the room; you could also put a mic in the vicinity of the speaker and run that to a dedicated recording track. For that matter you could add the PA later on—just take your pre-recorded vocal and run the signal out to the speaker, then mic that up and blend to taste with the “dry” track.

For real live ambience, there’s nothing like having a real live room to work with. While writing a book on the old studios of New York several years ago, I learned how engineers would create their own reverb sound by sending untreated vocal or instrument tracks from the console to a purpose-built room called an echo chamber, or “live chambers” (since the sounds fed to the room were often done during the performance itself). Typically made of plaster, ceramic tile or other hard smooth surface, echo chambers were the go-to source for studio reverberation in the years before artificial processors like echo plates and digital reverbs came along and can be clearly heard on works by the Beatles, the Rolling Stones and others from the time. So infatuated was I with the concept that, upon finishing the book, I constructed my own crude chamber in our basement with the idea of creating a reverb sound that wasn’t just like everyone else’s.

Not that you have to go to such extremes—for that matter, any accessible space with a bit of liveliness can serve as an instant echo-maker, whether it’s an open stairwell, a tiled bathroom, even an empty storage unit. If you’ve got a keyboard that can reproduce everything from horns to harps, this analog methodology is perfect for taking the sterility out of those digital samples—a friend of mine once snuck a laptop, portable mic and small speaker into an enclosed handball court and turned her canned string section into something akin to the Philharmonic.

Yes, technology has improved to the point where there’s an algorithm for just about any sound imaginable. So why go through all this trouble when you can get Abbey Road’s #2 live chamber by pushing a button? To me, recording ingenuity—and the satisfaction that comes from creating your sounds by hand—is at least half the fun, especially when working on a compelling piece of music. So rather than always keeping everything boxed up, next time get out the microphones and try moving some air. Your ears will thank you.