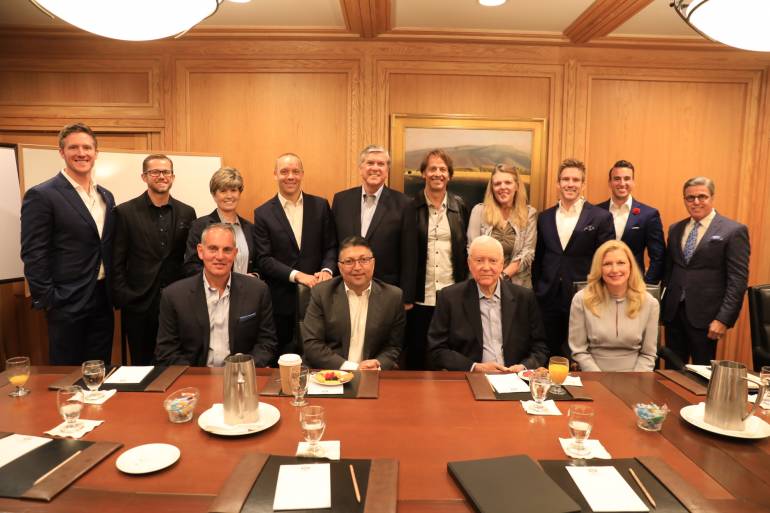 BMI President and CEO, Mike O’Neill, along with other industry experts, participated in a symposium entitled “Music Licensing in the 21st Century” held by the Hatch Center, the policy arm of the Orrin G. Hatch Foundation, yesterday in Park City, Utah.

Other speakers included Makan Delrahim, Assistant Attorney General for the Antitrust Division of the U.S. Department of Justice; Gordon Smith, President and CEO of the National Association of Broadcasters; Elizabeth Matthews, CEO of ASCAP; and Orrin G. Hatch, Chairman Emeritus of the Orrin G. Hatch Foundation.

The discussion, led by Matt Sandgren, Executive Director of the Hatch Foundation, focused on striking a balance in music licensing and creating an environment in which both businesses and creators can thrive.

Hatch stated, “What an honor to have so many music luminaries here in our own backyard. As a lifelong songwriter myself, I have long advocated on behalf of the talented men and women who contribute greatly to our arts and culture through their work in the recording industry. Today we heard insightful commentary from a handful of policymakers who are committed to building on the coordinated effort between lawmakers and stakeholders that resulted in the Music Modernization Act last year.”

O’Neill said, “If we all give and take, like we did with the MMA, we can make great things happen. That spirit of compromise can go a long way for our industry and better serve, songwriters, businesses and the public.”

“Regulation by Washington is not justified simply because it has been around for decades and has been the status quo…. Over the last century, innovation, regulation, and competition have been complementary—yet sometimes, competing—forces at play in the music industry. When regulation threatens to reduce innovation or competition, change must occur to restore the proper balance,” noted Delrahim.

“We have to innovate and collaborate together if we are going to create a global licensing marketplace with reliable and transparent data for licensees and drive a sustainable ecosystem for songwriters,” added Matthews.

“The ASCAP and BMI consent decrees have effectively prevented harm to licensees, songwriters and consumers, and ensured that radio and television broadcasters are able to fairly, efficiently and transparently license musical works to the benefit of their audiences. For these reasons, the Department of Justice should work with the many legislators who have weighed in during the Music Modernization Act process and since then to help develop an alternative framework prior to any action,” stated Smith.

“In true Orrin Hatch fashion, today’s symposium brought together two sides of an issue to work towards a unifying solution,” concluded Sandgren. “We need a regulatory environment that allows our broadcasters to thrive, but we also need consent decrees that work for our songwriters and publishers. The biggest takeaway from today is that we can do both.”