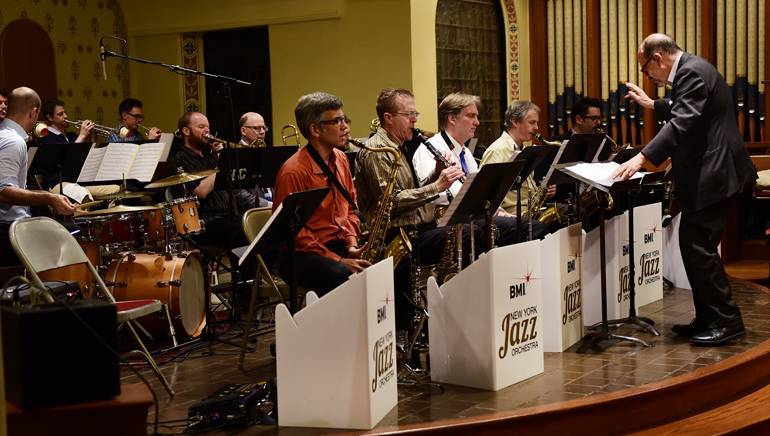 As a prestigious creative forum for musical exploration and development, BMI’s Jazz Composers Workshop will proudly present its 29th Annual Summer Showcase Concert featuring the best new big band and jazz orchestra compositions created during the past year at the esteemed Workshop. The BMI/New York Jazz Orchestra, a 17-piece modern repertory ensemble made up of leading New York musicians, will perform the pieces at this free event on Tuesday, June 6, at The Marjorie S. Deane Little Theater in New York City (10 West 64th Street). Doors will open at 7 PM with the showcase starting at 7:30 PM. Seating is on a first come, first served basis.

Returning for the second year in a row to lead the program is Musical Director and GRAMMY Award nominee Andy Farber, along with Associate Musical Director and GRAMMY award-winner, Ted Nash. Farber, who teaches jazz composition and arranging at The Juilliard School in New York, has written arrangements for legendary artists including Shirley Horn and Jon Hendricks, as well as symphony orchestras including the Boston Pops Orchestra. Outside of his work in jazz, Farber also composes music for media including TV commercials, TV shows, web series, documentaries, and feature films. Nash, who marks his return to the BMI Jazz Composers Workshop where he was a student in the early ’90s, is a member of the Jazz at Lincoln Center Orchestra directed by Wynton Marsalis, as well as the Jazz Composers Collective. Among his many accomplishments, Nash received two GRAMMY awards this year for his big band compositions from Presidential Suite: Eight Variations on Freedom.

“It is my great pleasure to be back for a second season with BMI’s Jazz Composers Workshop,” said Farber. “This year’s workshop yielded high caliber and these gifted writers will bring new energy to the jazz community. Ted and I are proud to present their new work at this year’s summer showcase featuring the great talent of the BMI/ New York Jazz Orchestra.”

Since its founding in 1939, BMI has been deeply involved in the jazz community and this year’s Jazz Composers Workshop continues BMI’s support for the genre, with the annual Summer Showcase Concert highlighting another year of the workshop’s impressive composers. Following the performances, the BMI Foundation will award the 18th Annual Charlie Parker Jazz Composition Prize to the writer of the best new work featured. The judges will include Slide Hampton, Chris Byars and Miho Hazama, who won the Charlie Parker Jazz Composition prize in 2015. Past judges have included Wynton Marsalis, Jimmy Heath, Alan Ferber, Darcy J. Argue, John Fedchock and Ingrid Jensen, among others.

As part of the prize, the winning composer will receive the Manny Albam Commission to create a new piece for next year’s concert. The Commission, which is named in memory of the Workshop’s co-founder and longtime musical director, Manny Albam, was awarded last year to Dan Block, who will premiere his commissioned work at this year’s concert.