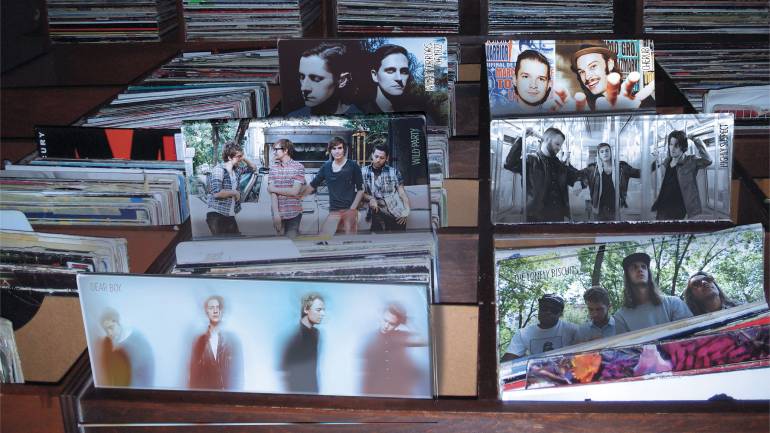 Every March, thousands of bands from around the world descend upon Austin, TX, for a sleepless week of showcases, hoping for their big break at SXSW. The annual BMI showcase at the festival has served as a launching pad for GRAMMY-winning performers such as Imagine Dragons and Macklemore & Ryan Lewis in years past, and the lineup for this year’s show on Wednesday, March 12, at Bar 96 on 96 Rainey Street promises a sneak peek at some of today’s hottest Indie up-and-comers. Check below for information on each band, and come out and see the shows!

Dear Boy (Los Angeles, CA)
With self-descriptions such as “bitter-sweet alternative rock with roots in both post-punk and 90‘s British guitar pop,” the quartet Dear Boy know exactly what sound they are going for - and execute with finesse. A year spent playing club shows around LA and a strong debut EP have resulted in a loyal following and big buzz around their unique sound.

Wild Party (San Antonio, TX)
Power-pop quartet Wild Party only have an EP to their name. Well, that, and an overseas tour opening for the Wombats, a bold fan base and the potential to make it huge with their simple take on dance-ready songs. Their performances live up to their name, shows with raucous energy and nothing but positive vibes.

Night Terrors of 1927 (Los Angeles, CA)
Born from the ashes of beloved Indie rock groups Rilo Kiley and the Honorary Title, Night Terrors of 1927, composed of Blake Sennett and Jarrod Gorbel, shed their former genres for a new take on “slightly off-kilter” synth-based pop. The results? So far, an excellent EP, residencies at various venues in LA and a fantastic live show.

The Lonely Biscuits (Nashville, TN)
Recipients of MTV’s Woodie Awards College Artist of the Year in 2013, the Lonely Biscuits are the perfect soundtrack to that first day of summer vacation after finals. John Paterini’s sweet serenading with Grady Wenrich’s smooth rap flow pair together for a sound that’s hard to describe any other way than how the band puts it: “phunky phresh.”

Highly Suspect (Brooklyn, NY)
For only three people, East Coast rock and rollers Highly Suspect sure make a lot of noise. Pulsing percussion accompanies, wicked guitar lines and gritty vocals create raw rock that at times echoes anything from early Kings of Leon to Queens of the Stone Age, and has left audiences at 700 shows in five years wanting more.

Cherub (Nashville, TN)
Self-described as “the dance love-child of 80’s funk and pop,” the electronic-pop duo Jordan Kelley and Jason Huber has become a staple of the Nashville scene the past few years. Their live show is unparalleled  - tightly performing their completely original blend of hedonistic pop anthems and nostalgic-feeling R&B grooves that will get even the most skeptical of toes tapping.