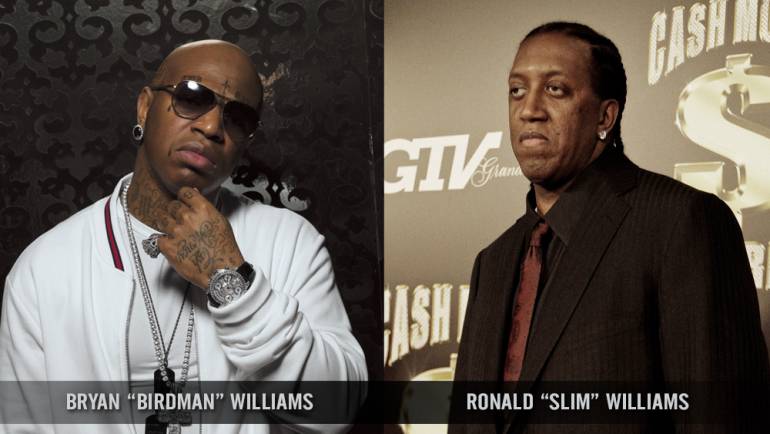 Broadcast Music, Inc. will recognize Cash Money’s Bryan “Birdman” Williams and Ronald “Slim” Williams as Icons at the 2013 BMI R&B/Hip-Hop Awards, to be held Thursday, August 22, at the Manhattan Center in New York City. The star-studded event, formerly known as the BMI Urban Awards, celebrates the songwriters, producers and publishers of the most-performed r&b/hip-hop songs of the previous year.

The BMI Icon designation is bestowed upon artists who have had a “unique and indelible influence on generations of music makers.” As the 2013 honorees, the Williams brothers join a legendary list that includes Mariah Carey, the Jacksons, Snoop Dogg, George Clinton, James Brown, Isaac Hayes, Little Richard and Al Green, among others.

“Bryan and Ronald Williams’ creative and entrepreneurial acumen has resulted in over 20 years of global success for them personally, and for their enterprise, Cash Money Records,” said Catherine Brewton, BMI Vice President, Writer/Publisher Relations, Atlanta. “I’m personally thrilled to recognize two individuals I’ve seen achieve so much success in their careers. Their innate ability to cultivate talent, build and sustain a brand while composing chart-topping songs is an accomplishment worthy of the Icon designation.”

The Cash Money story began in 1991, when, inspired to create opportunities for local talent in their native New Orleans, the Williams brothers co-founded their own independent label. Regional success with rappers B.G, Young Buck and a then unknown Lil Wayne, led to an unprecedented production and distribution deal with Universal Music Group. Armed with ownership of all its master recordings – a rarity for a bourgeoning record company in any genre – Cash Money started churning out hit albums including Juvenile’s 400 Degreez and Lil Wayne’s debut, Tha Block Is Hot. An artist in his own right, Bryan “Birdman” Williams has released four solo albums, a collaborative album, Like Father, Like Son, with Lil Wayne, and five albums with producer Mannie Fresh as one-half of the duo Big Tymers.

Together, the Williams brothers have overseen the extension of the Cash Money brand well beyond music: Cash Money Content, the book publishing arm distributed by Atria/Simon & Schuster, has released three New York Times best sellers and will be releasing the highly anticipated new book by the Reverend Al Sharpton this fall. As they did in the beginning, Bryan “Birdman” Williams and Ronald “Slim” Williams continue to nurture young talent into global superstars: Young Money Entertainment – the joint venture with Lil Wayne – has steered the meteoric rise of recording artists Drake, Nicki Minaj and Tyga. And the machine shows no signs of slowing down – in 2012, Cash Money celebrated the sale of 500 million songs worldwide, a feat made possible by its top-tier artists and savvy leadership.

Bryan “Birdman” Williams reacted to the news: “It’s absolutely incredible to be honored in this fashion. Cash Money Records is a family first and foremost, and we share this achievement with our entire team and roster. It’s because of the immensely talented artists we’re blessed to work with that we’re in this position, and I want to thank them. They deserve this as much as we do. We also want to thank BMI and everybody who’s ever believed in this dream that my brother and I first had over 20 years ago. We’re going to keep everything going even stronger for the next 20.”

Ronald “Slim” Williams echoed his brother’s enthusiasm: “This recognition from BMI is one of the greatest honors we’ve ever received. It’s something that my brother and I would’ve never been able to imagine at the genesis of our label. To be recognized by the industry like this, it’s humbling, and it’s inspiring. We want to thank BMI, every artist on our roster, Universal, and anyone else who’s been a part of Cash Money Records’ success.”

As successful as they’ve been, the Williams brothers are dedicated to giving back to their community. For the past 16 years, they’ve hosted a Turkey Giveaway during Thanksgiving, where they personally hand out over 2,000 turkeys and provide access to free medical screenings.

The BMI R&B/Hip-Hop Awards will include an all-star musical tribute to this year’s Icons, as well as the presentation of the Social Star Award and R&B/Hip-Hop Songwriter, Producer and Publisher of the Year crystals. BMI’s President and CEO Del Bryant and Catherine Brewton will share the evening’s hosting duties with recording artist Ray J.

Chime in on the conversation about the Awards by using the hashtag #BMIRnBHipHopAwards.