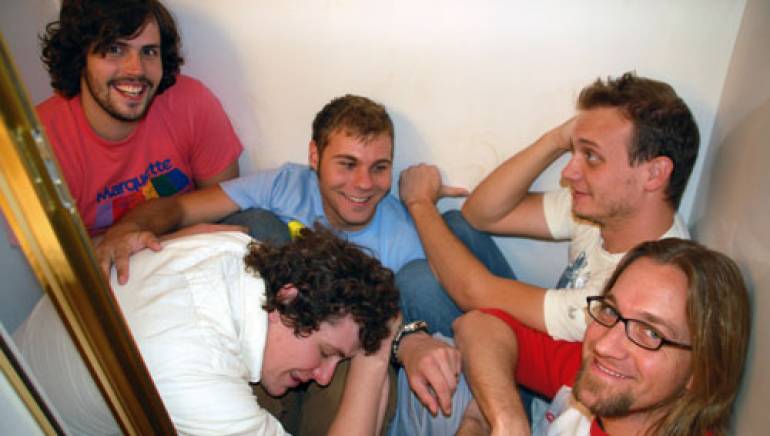 In April 2006, Dear and the Headlights completed the recording of their debut record, “Small Steps, Heavy Hooves” with local producer Bob Hoag (Joel Plaskett, Versus the Mirror, The Format). Although Ian Metzger, PJ Waxman, Joel Marquard, Chuckie Duff and Mark Kulvinskas had only started playing shows together under the Dear and the Headlights name a year earlier, this first full-length recording had been a long time in the making.

Ian, Joel and PJ had been playing music together for years in their bedrooms and garages, not playing any shows, not solidifying a real rhythm section, not even bothering to come up with a band name, just writing lots of songs. A call from a friend, Chuckie Duff, and an offer to record a few demo songs seemed like a good next step for the friends. Chuckie recorded, mixed and mastered three songs in just a couple days. Some CD-R copies were made and given to friends, who all responded with amazement. Despite that, there was continued trouble finding a rhythm section and the boys decided shortly after the demos were recorded to call it quits. Months later, Chuckie, who had become obsessed with the songs he had helped record, called Joel, with the intent to convince everyone to get the band back together. He offered to play bass, finance a full-length recording and help find a drummer. Fate would have it that Ian, Joel and PJ had already decided to get together and play some of the old songs that same day.

So, Dear and the Headlights was born, now all they needed to do was find a drummer. After many failed try-outs, they found Mark Kulvinskas, thanks to an ad they had placed on Craigslist. He learned nine songs in one practice and was in, just in time for the band’s first show a couple weeks later. Things moved quickly once the band started playing out. Immediately Dear and the Headlights were opening for national acts like The Bravery, Matt Pond PA, Make/Believe, Idlewild, The Hold Steady and more. Their demo recordings got great reviews in respectable online publications including Music (for Robots) and Transform Online. Local press also praised the young band, including the dubious distinction of 944 Magazine’s “Best Local Band You’ve Never Heard.” Dear and the Headlights were quickly changing the “never heard” part. Along with playing bigger and bigger shows, they continued to write and re-write songs for their upcoming studio-time with local producer-extraordinaire, Bob Hoag.

So after just one year of being a band, Dear and the Headlights had a finished LP. But even before the record was finished, the calls had already started coming in. Record labels big and small were curious about this band with the annoying name making noise out in Arizona. However, none of the interest turned into any solid offers, and the band continued on a path toward self-release, went on three self-booked tours during the summer and started planning the release of their record.

After several months of talking, Equal Vision Records has decided to sign Dear and the Headlights and release their 14 song debut in early 2007.