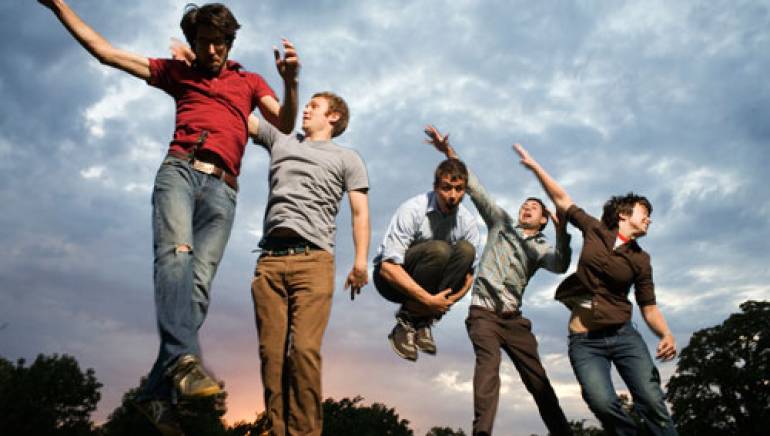 Is a bound stem a reference to flowers or what? Sure: or it’s a word which has lost its place in the language—the ruth in ruthless, the gruntle which becomes disgruntled. A bound stem depends on its prefixes and suffixes to thrive.

Chicago’s Bound Stems is Dan Fleury (guitar), Bobby Gallivan (vocals, guitar), Janie Porche (vocals, guitar, sampler, violin, etc.), Dan Radzicki (bass, keys, vocals) and Evan Sult (drums, tapes). Fleury, Radz, and Bobby were friends from high school basketball on; Evan arrived from Seattle and Harvey Danger in September 2002. They started writing songs all the time, then playing out, then writing some more, and by the time Janie had completed the transition from friend to roommate to band member, The Logic of Building the Body Plan EP had been released by Flameshovel Records and they were deep into the construction of Appreciation Night, Bound Stems’ debut full-length, also on Flameshovel.

Appreciation Night was two years in the making; the songs themselves cover a dozen decades. Chicago is the album’s host city, where the Civil War blends with the roar of the elevated train and the songs’ edges are embroidered with the found sounds of airport patter and clattering turnstiles, parties, private conversations, snow crunch and drifting histories. Produced by Tim Sandusky and Evan at Chicago’s Studio Ballistico, Appreciation Night is a large and complex album in which each song could as easily be a story as a chapter. Mathy, too: opener “Andover” hides tricky time signatures under a warm patchwork blanket of vocal melody, and “This Is Grand” rolls sevens hard against sixes. There’s history rock (“Walter Waters Addresses the Bonus Army”), lit. rock (“Rented a Tent”), and social studies pop (“Wake Up, Ma & Pa Are Gone”), and each song contains moments of fierce, earnest success, where all of Bound Stems’ sonic experiments converge and fall into crashing, exultant hooks. Appreciation Night is a record of a band’s optimismism: fascination with life, a diet of interesting objects, the narrative thread.

Recording began to blend with playing farther and farther from home, as Bound Stems followed a sizable storm of surprised and favorable press around the East Coast and Midwest. Jon Pareles wrote them up in the New York Times (“Bound Stems finds plenty of room in a zone that borders Wilco, Animal Collective, Tortoise and the Fiery Furnaces”), as has Spin magazine, Entertainment Weekly (“a woozy triumph”), Alternative Press magazine (“experimental yet strangely accessible,” 4 out of 5 stars), the Chicago Reader (“emotionally super-saturated, achieving post-rock’s complexity without its aridity or pretension”), and a starburst of blogs by people who’ve heard Bound Stems online and caught their shows. Their live shows glow with pleasure, swinging from the tight curls of “Crimes and Follies” to the roaring cheer of “Excellent News, Colonel” to the baroque-ass pop of “Western Biographic.” Instruments appear and disappear behind ivy vines while Bobby sweats out his lyrics and stomps alongside Janie’s harmonies, Fleury’s Camaro of a guitar, Radz’s melodic bass leads, and Evan’s distracted smile. It’s a pleasure to see.

Now that Appreciation Night is complete, the members of Bound Stems have disengaged their real jobs (high school history teacher, comic book art director, lab tech, hi-tech techs) in favor of their heretofore fake job as a touring band. It’s an act of faith consistent with the characters on the record, the architecture of the songs, and the implied narrative arc. It’s time to spread the good word. Get excited about counting again.

Appreciation Night will be in stores Sept. 19th on Flameshovel.