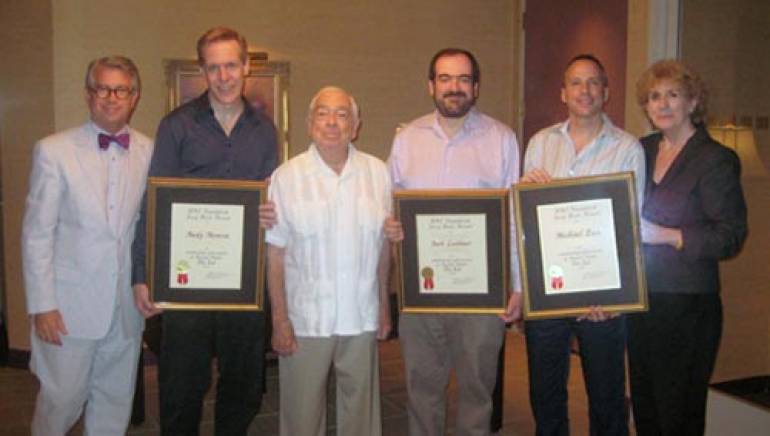 The BMI Foundation, Inc., a not-for-profit corporation dedicated to encouraging musical development, presented the 2009 Jerry Bock Award for Excellence in Musical Theatre to lyricist Jack Lechner, composer Andy Monroe and librettist Michael Zam at a luncheon held at the BMI offices. Lechner, Monroe, and Zam received cash awards as well as commemorative plaques for their musical The Kid. Jerry Bock, a Pulitzer Prize- and Tony Award-winning composer of timeless classics like Fiddler on the Roof and Fiorello, personally selected The Kid, which was developed in the BMI Lehman Engel Musical Theatre Workshop.

“We are honored to have Jerry Bock generously share his wisdom and his guidance in selecting the award and meeting with the winners,” said Jean Banks, Senior Director of the BMI Lehman Engel Musical Theatre Workshop.

Jack Lechner has a varied career in the entertainment business: He was an executive producer on the Oscar-winning Errol Morris documentary The Fog of War; on Parking Lot, a reality series for the Trio Network; on the Emmy-nominated HBO documentary Left of the Dial; and a songwriting contributor to the 2003 film View from the Top. Lechner won the 2004 Jerry Harrington Award For Outstanding Creative Achievement in Musical Theater. Jack’s non-fiction book, Can’t Take My Eyes Off Of You: One Man, Seven Days, Twelve Televisions, was published by Crown in November 2000.

Andy Monroe has been cited by The Village Voice as one of “the most talented openly gay singer-songwriters in the country.” They called his song-cycle, Days Of Hope And Circumstance, “a raw cri de coeur…undeniably moving.” In addition, he has recorded three solo albums: Joyful Noise: Disc One, Joyful Noise: Disc Two, and the dark and brooding Rain. As a composer for musical theatre, Andy wrote the score for The Tragic and Horrible Life of the Singing Nun, which premiered at the New York Musical Theatre Festival in 2006. He also contributed songs to the successful revue Sex — The Musical. Monroe won the 2002 Jerry Harrington Award for Outstanding Creative Achievement in Musical Theatre.

Michael Zam teaches screenwriting at NYU and Modern British Drama at NYU in London (Teaching Excellence Award, 1998 and 2007). He also created the successful Professional Certificate in Screenwriting, the first on the East Coast. He is a former American Film Institute Fellow where he won the top screenwriting prizes. His articles have appeared in numerous publications, including Details, Time Out, and indieWIRE. Michael is an alumnus of BMI’s Librettist Workshop. Currently he’s penning a stage adaptation of the novel Selfish & Perverse by Bob Smith for director Jerry Mitchell, and developing screenplays for major studios with Jaffe Cohen.

The Kid is based on the memoir by Village Voice columnist Dan Savage. The new musical, which explores the real-life adoption by Savage and his partner Terry, has been announced as part of The New Group’s (a not-for-profit producing organization) 2010 season.