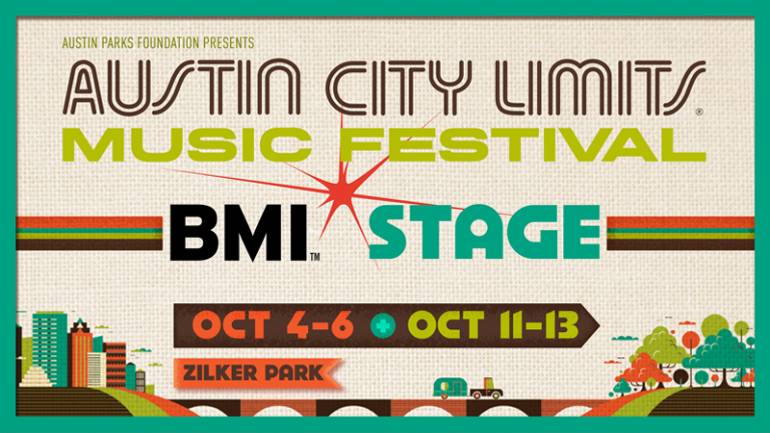 “The ACL Festival is a hallmark opportunity for BMI to showcase some of our best up-and-coming writers,” said Mark Mason, Executive Director Writer Publisher Relations. “We always look forward to presenting a great BMI stage and this year is no exception.”

The BMI performers in order of appearance are:

The ACL Music Festival features eight stages with more than 130 bands from across the globe and offers amazing local eats, wares and many other activities for festival goers of all ages. BMI’s participation again this year offers invaluable performance opportunities for emerging songwriters, underscoring the Company’s commitment to promoting new talent. More information is available at http://www.aclfestival.com/.

“Williams has recorded her most accomplished, mature and world weary album; even Hank Sr. would be proud.” —American Songwriter

Wick-it the Instigator is a DJ/Producer from Nashville, Tenn. His roots are in hip hop/turntablism, but electronic music has made its way into his repertoire as well. Wick-it is all about the party, and despite the style or approach with each individual track, serious crowd rocking fun is the goal.

Part songwriter, part blues singer, part slide guitar phenom, Colin Lake is paving a musical road all his own. Lake’s music incorporates elements of soul, rock and folk to create a sound and feel that is strongly original and disarmingly familiar. As his reputation for authentic, down-home presentation continues to grow, Lake can be found on a variety of stages performing for captivated audiences and alongside some of the biggest names in New Orleans music.

Valerie June is coming into her own with the last year bringing rave reviews at SXSW. A self-taught musician, singer and song-writer from small-town Humboldt, Tenn. (population 8,000), she honed her astonishing sound in the vibrant Memphis atmosphere, her spectrum of influences everyone from Elizabeth Cotten, Leadbelly and The Carter Family to Whitney Houston, Van Morrison, Dolly Parton, Joni Mitchell and a continually eclectic group of other legends.

Judging by her regular standing-room-only shows at NYC’s The Living Room, Diable’s knack for poignant songwriting is one of her strongest talents, even when accompanied by only her guitar. Diable has showcased at CMJ Music Conference, NACA (Central), NACA (Northeast), NACA (MidAtlantic) & Dewey Beach Music Festival and has shared the stage with John Mayer, KT Tunstall, Sonny Landreth, Amos Lee, Norah Jones, Robert Cray, the Gin Blossoms and Shawn Colvin, to name a few.

Their sound melds the four unique voices of Ricky Young, Joel King, Taylor Burns and Preston Wimberly, who were all lead singers before they came together as the Wild Feathers, fronting their own bands and writing songs with their own distinct sounds. The band takes inspiration from across the musical spectrum - country, blues, folk and rock - and spins it into a roaring web of warm, cosmic melodies with vintage roots and modern tones.

The Peterson Brothers were born and raised deep in the “Lost Pines” of Bastrop, Texas. Their music combines the classic blues sounds of legends with their own unique blend of soul-infused inspiration. The Peterson Brothers awards include: 2012-13 Austin Music Awards, Best Under-18 Band, Top 10 for best Blues/Soul/Funk, Top 10 for best “Bass,” 2012 Best Band of Bastrop County, 2011-12 Austin Music Awards Top 10 Blues, Soul and Funk and first place in the 2011 and 2012 Aspire to Be Me Talent showcase.

Shinyribs can produce some of the funkiest and most beautiful roots music on the planet. A listen to the straight-up duet “Shores Of Gallilee” (with Sally Allen), the sweet, quasi-fable “Who Built The Moon,” or the intimate cover of Sam Cooke’s “A Change Is Gonna Come” that closes the record, shows that he delivers grade-A Country Soul.

Duhon draws his stories of struggle and triumph from his own path with a tangible nostalgia for the blues and folk roots that inspire him. Whether it’s love that crosses color lines, a family challenged by life’s unexpected turns or the woeful tale of a city left to drown, Duhon brings his audience into the most intimate of spaces through his storytelling.

Luella and the Sun

“Nashville’s Luella and the Sun approach the blues and gospel-soul as if these traditions were the food of the gods and they haven’t eaten for a week. Luella herself has a ferocious, feminine voice and performs with zero fear.” - NPR Front Row

The Dynamites & Charles Walker have spent several years in a furor of worldwide touring. Four tours of Europe, three of Australia, and virtually every weekend stateside spent “gettin’ up in the morning and making the world a funkier place,” to quote their nightly show-opening monologue promise, account for their soul-purveying whereabouts since the fall 2009 release of “Burn It Down.” In 2012, a new chapter of their continuing chronicle began with a batch of singles earning them a well deserved place at ACL.

The young songwriter comes by her fears honestly, battling a serious (and ongoing) illness at age 9 and losing her father at 14. She grew up fast, at first rebelling, then spending several years on a curious solo journey across the country studying philosophy, theology and writing songs before settling into Nashville’s thriving independent music scene. Adept on the piano and guitar, the singer-songwriter says she was “raised on James Taylor and Lauren Hill.” Music Connection named her as one of the “Best Unsigned Artists of 2012.”

The gentleman from Texas is being hailed as the best damn one-man show in Austin. His set involves a handmade suitcase kick drum and feverish fingerpicking,  which follows in the tradition of Townes Van Zandt, Leo Kottke and Michael Hurley. Shakey Graves was named one of the 12 Artists of 2012 by KUT 90.5 and has been bestowed with the distinct honor of having February 9th proclaimed “Shakey Graves Day” by the City of Austin.

Named one of Paste Magazine’s “12 Tennessee Bands you Should Listen to Now,” Cherub had a massive 2012, with appearances at such major festivals as Bonnaroo, SXSW, Electric Forest, Hangout Fest, Snowball Music Fest and with STS9 at Red Rocks Amphitheater. Cherub is a sexy electro-pop duo that is the dance love child of 80s funk and pop-music from the future. The members of Cherub, Jordan Kelley and Jason Huber, share a love for honest original music and vibrant live performance.

A three-piece rock band from Franklin, Tenn., CALEB was founded by brothers Caleb and Will Chapman, and shortly thereafter joined by friend/guitarist Scott Mills. From the beginning, the chemistry between the three young men has defined their approach to music and the road with a story of hope and perseverance.

Growing up in small-town upstate New York, frontman Sam Harris, his brother Casey and childhood friend Noah Feldshuh bonded over an obsessive love for punk, rock and roll, soul and hip-hop with an unshakable sense of brotherhood that has long shaped the sound and spirit of X Ambassadors. The band has solidified their sound into a groove-fueled take on alt-pop, that ultimately landed them a deal with KIDinaKORNER/Interscope Records.

Picking and choosing their favorite elements of soul, funk, Motown and straight-up Billboard pop, Alanna Royale has assembled their own unique style out of many. Not quite soul but not quite rock, Royale shines brightest when marrying their dirty rock n’ roll attitude with their smooth, retro roots. 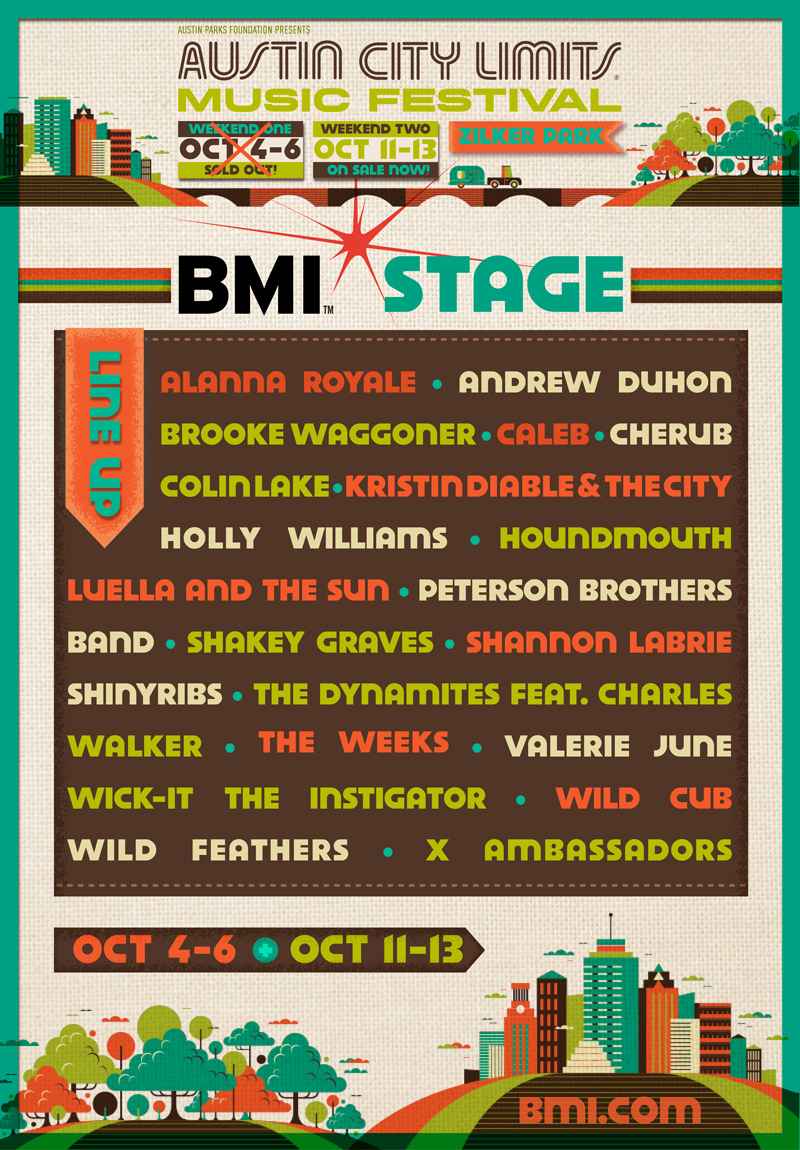