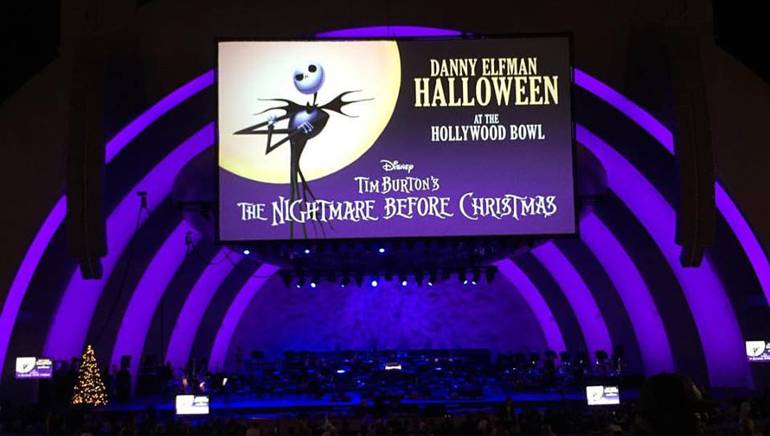 The audience is ready for the The Nightmare Before Christmas to begin.

On Saturday, October 31, just in time for Halloween, the Hollywood Bowl fittingly presented Tim Burton’s The Nightmare Before Christmas. Iconic composer of the movie’s music, Danny Elfman, sang the role of Jack Skellington, the story’s maniacal Pumpkin King, with the Hollywood Bowl Orchestra while the legendary film was projected on the Bowl’s mammoth screen.

The sold-out crowd, who cheered repeatedly throughout each performance, came complete with costumes based on Burton’s unique filmography, while other surprise guests took the stage, including Sandy Cameron, who brilliantly played violin at last year’s Danny Elfman’s Music from the Films of Tim Burton concerts; Catherine O’Hara, who reprised her role as the voice of Sally; and Ken Page, who gave his return performance of Oogie Boogie. For the finale, Elfman and O’Hara rendered an emotional reprise of “Sally’s Song.”

Still more treats were in store for The Nightmare’s fans. Taking the stage again for the first of many encores, Elfman also brought out surprise guest Pee Wee Herman, who, with Elfman and O’Hara, performed “Kidnap the Sandy Claws” as Lock, Shock, and Barrel. Elfman then performed his own version of “Oogie Boogie’s Song,” with John Mauceri stepping in for Sandy Claws as Elfman exuberantly sang and danced. Taking the stage one last time, Elfman ripped off his pin-striped jacket, strapped on an electric guitar and brought out former Oingo Boingo partner Steve Bartek for an incomparable rendition of “Dead Man’s Party.” This was the first time Elfman has performed an Oingo Boingo song live on stage since the Farewell to the World concerts at the Universal Amphitheater 20 Halloweens ago.

Trick or treating will never be the same for those that witnessed this unforgettable performance!