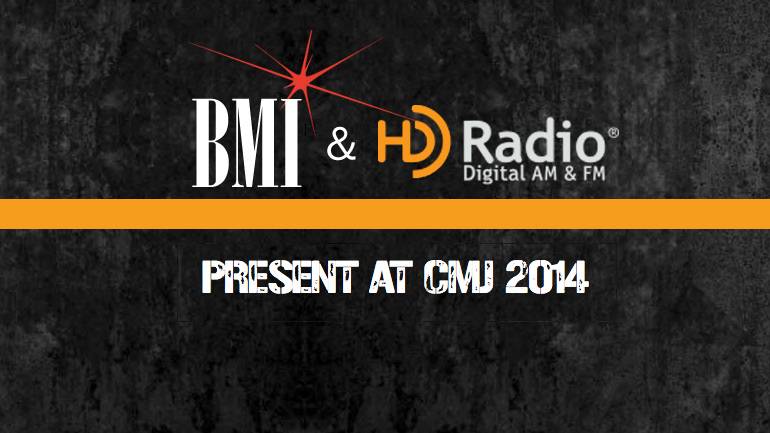 The CMJ festival is one of the world’s most important outlets for the discovery of new music, with more than 1,300 performers given a chance to shine in more than 80 nightclubs and theaters spread across New York City. “CMJ is the perfect festival for identifying and discovering new talent,” said Samantha Cox, BMI Assistant Vice President, Writer/Publisher Relations. “Aligning with CMJ provides a priceless opportunity and platform for BMI songwriters to share their music with broader audiences.”

For up-to-date information on BMI and the CMJ event, follow us on Twitter at @bmi. Here’s the schedule for the HD Radio/BMI showcase. Don’t miss it!

7:30 - 8:00pm – The Wans: Since they formed two years ago, The Wans have been unleashing shotgun blasts of rock & roll that have resounded from their hometown of Nashville all the way to London. They’ve already opened for artists such as Pearl Jam, Beck and the Black Lips, and their music has been featured on ABC’s Nashville, A&E’s Longmire and USA’s Necessary Roughness.

8:20 – 8:50pm – Thief: Spawned as an electronic pop project by songwriter PJ Wolf, Thief churns out fresh minimalist sounds reminiscent of contemporaries such as Metronomy, Frank Ocean and N.E.R.D. With the assistance of producer Matt Redlich, Thief released Closer, an EP in May, to impressive reviews.

10:00 - 10:30pm – Charly Bliss: The Brooklyn-based bubble-grunge four-piece combines pop sensibility with heavily distorted instrumentals. Their live show is characterized by an enthusiasm that is hard to comprehend, the undeniable fun of which is mirrored by their recent release, Soft Serve.

10:50 – 11:20pm - Atarah Valentine: Over the past couple of years with the guidance of several notable producers (Damian Taylor, Mark Saunders), Valentine has honed his distinctive and infectious style, fusing elements of arena rock, classic ‘80s pop and ‘90s grunge to create a sound uniquely his own.

11:40pm - 12:10am –VÉRITÉ: Instead of shying away from painful moments of self-doubt, VÉRITÉ inhabits them with a rare artistic grace and confidence. Her approach to songwriting and recording enables her to be free of self-consciousness.