Broadcast Music, Inc., in conjunction with the iconic Apollo Theater in New York City, will present BMI’s renowned “How I Wrote That Song” panel on Thursday, June 19, 2014, at 6:30 p.m. The event, which is free and open to the public, will provide an opportunity for aspiring songwriters and composers to learn about the craft of songwriting from today’s Latin hitmakers. Panelists will include Latin GRAMMY winners Alcover & Xtassy, known for their smash hit “Danza Kuduro;” Bachata duo Mickey Then & Joell Jaquez of 24 Horas; and Latin GRAMMY nominee Pedro “sP” Polanco, producer of “Hoy,” and “Odio No Odiarte” from Leslie Grace’s most recent self-titled album. Moderating the discussion will be Mega 97.9 on-air radio personality Jaylah Sandoval.

“Career Panels at the Apollo” is part of the Apollo Theater Academy, a program which advances career and leadership skills through seminars, workshops, panels and internships focused on professions “behind the-scenes” in the arts and entertainment industries. Shirley Taylor, Director of Education for the Apollo Theater, commented, “We are delighted to partner with BMI to bring their signature career development panel, ‘How I Wrote That Song,’ to the Apollo Theater. With every career panel that we do, the goal is to engage students and young professionals and show them that there are a variety of career options within the arts and entertainment industries. Over the course of its 80-year history, the Apollo has been a beacon of hope, achievement and opportunity for countless artists, including musicians and songwriters.” Taylor continued, “Events like ‘How I Wrote That Song’ help to inspire a new generation of songwriters and to extend the mission of the Apollo to advance emerging creative voices across cultural and artistic media.”

At the young age of 28, Alcover has cemented himself as a major player with Don Omar’s #1 smash hit “Dutty Love,” which earned him a BMI Award and was the anchor single from the album MT02: New Generation, garnering a 2012 Latin GRAMMY for Best Urban Album. Alcover also won the 2012 Billboard Latin Award for Producer Of The Year for his work on Don Omar’s #1 album Meet The Orphans, which included the #1 hit “Taboo” that he co-wrote and produced.

Juan A. Abreu is well known within the Latin Music industry as “Xtassy” and as a founding member of the award-winning and urban fusion producing duo, A&X. The self-made, multi-faceted songwriter, producer, DJ and innovator gained his recognition at a young age for his record-breaking hits within the new generation of Latin Music. Xtassy’s unique style of blending international rhythms with electronic elements, Tropical and Urban influences has shaped the sounds and voices of today’s music.

The rebirth of musical group 24 Horas, topped by the voices of Mickey Then and Joell Jaquez, is a unique mix of Latino, tropical, and R&B styles. The duo has written many hits including “24 Horas,” “Por Favor” and Prince Royce’ latest single “Te Robaré.” These two talented young men possess the perfect balance between their American influences and Caribbean roots.

This young South Bronx native is a two-time Premio Lo Nuestro, Premios Juventud, Premios Billboard and GRAMMY nominated music producer. His stance in the industry is defined by hit songs that he’s produced such as: “Te Extraño – Xtreme,” “Llorar Lloviendo – Toby Love” and the most recent #1 Hit in Billboard, “Just the Way You Are – KRose.”

With her sweet voice and charisma, Jaylah Sandoval has been a hit on the Latin radio airwaves as a personality on Alex Sensation’s number one show on Spanish Broadcasting System’s La Mega 97.9 FM. She is a voiceover artist, emcee, on-air radio personality and celebrity interviewer known for her work at La Mega 97.9 FM, Univision Radio New York X96.3 FM, Lo Maximo Productions (LMP) and as a national plus-size model. 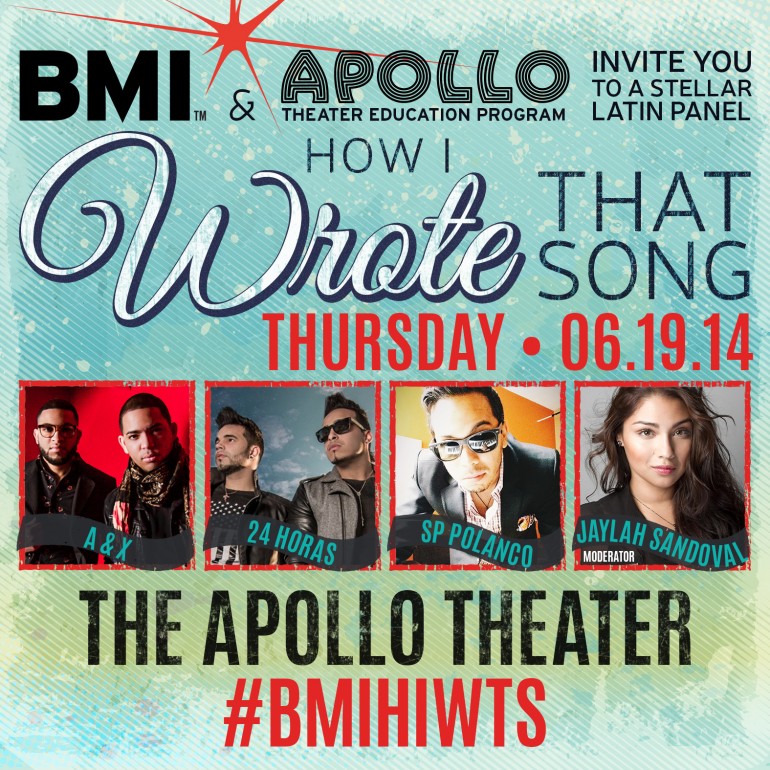