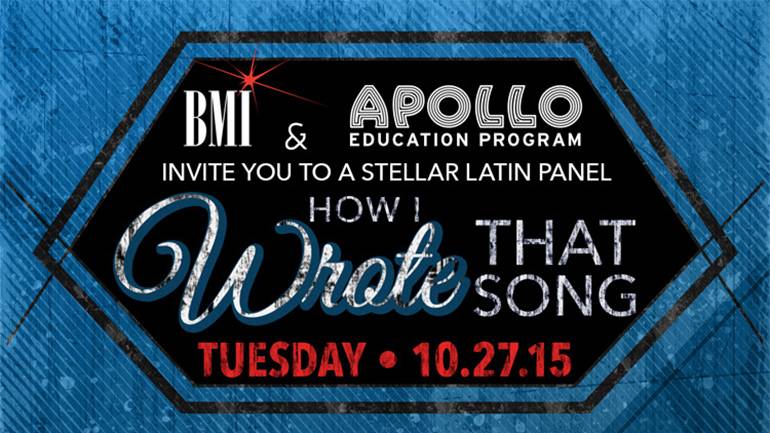 BMI and the Apollo Theater have once again partnered to present BMI’s “How I Wrote That Song®” at the renowned Harlem theater on Tuesday, October 27, 2015, from 6:30 – 8:30 p.m. The panel discussion, which is also presented as part of the Apollo Theater Education Career Panel series and is a free, open to the public event, will provide an opportunity for aspiring songwriters and composers to learn about the craft of songwriting from today’s Latin music hitmakers.

The informative and entertaining panel will feature Vein, Chris Hierro, Gregorio Uribe, Stefano Vieni, and Eunel Torres (Nueva Era) and will be moderated by Mega 97.9 radio personality, international DJ and producer Alex Sensation. Anyone interested in attending should RSVP at the following link http://www.eventbrite.com/e/apollo-career-panel-how-i-wrote-that-song-registration-18724140408 or visit www.apollotheater.org/education/

La discusión será en Inglés, pero puede incluir Españo – The discussion will be in English but may include Spanish.

About the panelists: Chris Hierro was raised in both New York and the Dominican Republic. Influenced by his father, a music producer/songwriter with the group “La Gran Manzana,” some of Chris’ writer/arranger production credits include: Los Toros Band, Ruby Perez, Andy Andy, and Wason Brazoban to name a few. He has toured Europe, America and Mexico singing background for numerous artists including Jerry Rivera, Obie Bermúdez, Thalia and GRAMMY winner Alejandro Sanz.

Eunel Torres is an American-Dominican Bachateros who’s actively contributed to the genre’s up-rise over the past 10 years. Between being a band member in “Nueva Era” with their international Bachata hit “Amor Eterno,” and his solo releases, including his last 2013 single “Cortame Las Venas,” Eunel has enjoyed top radio airplay, Billboard chart-topping hits and top sales all over the world. He has shared the stage with artists such as Daddy Yankee, rapper 50 Cent, Aventura, Juanes, Don Omar, NAS, Victor Manuelle, Fat Joe and Tego Calderon to name a few.

Gregorio Uribe is based in New York where he leads Gregorio Uribe Big Band, a 16-piece orchestra that blends cumbia and other Colombian rhythms with big band arranging. The band’s debut album, Cumbia Universal, (Zoho Music) was released on October 2, 2015, and includes a song featuring special guest Ruben Blades. Following the album will be a CD-release performance at Jazz at Lincoln Center scheduled for October 14. Named by the government of Colombia as one of the “100 Most Successful Colombians Abroad, ” Gregorio has also been a guest artist with Carlos Vives and Rubén Blades as well as an artist-in-residence at Dartmouth College and a commissioned composer for GRAMMY-winning Arturo O’Farrill’s Afro Latin Jazz Orchestra.

Stefano Vieni is a Mexican/Italian producer and singer-songwriter who has worked with artists such as Kalimba, Armando Manzanero, Samo, Maria León, Cynthia Rodriguez, Danna Paola, Reik, Mario Guerrero, Carla Mauri, Belanova, Ana Victoria, and more. In 2013, he produced and co-wrote Kalimba’s album Cena Para Desayunar, which reached #1 in sales its first week. The album’s first single “Un Nuevo Mundo Sin Ti” was #1 on radio for 4 consecutive weeks, while the second single, “Este Frio,” was #1 for 7 weeks and the third single, “Estrellas Rotas,” was #1 for 6 weeks. Stefano’s debut album, Amor Anatomico, is set to be released in 2015.

Alex Sensation (Moderator) is a native of Bogotá, Columbia, who made his way to NY at the age of 17 and has become one of today’s top DJ’s and radio personalities, keeping his show “El Mezclu” on NY Latin radio station LA Mega atop the ratings charts. His unprecedented energy and unique music knowledge has earned him many accolades including the ACE Award (the Association of Latin Entertainment Critics), the Global Spin Award, and the Latin Mix Award. Outside of his tremendous career in radio, Alex has recorded music with numerous international talents such as Pitbull, Jennifer Lopez, Enrique Iglesias, Daddy Yankee, Sean Paul, Carlos Vives, Juanes, Victor Manuel, Gente de Zona, Shaggy, J. Balvin, Nicky Jam, Tito El Bambino, Hector Acosta “El Torito,” Wisin, and Yandel. His philanthropic work includes the Divino Nino Foundation, Career Gear, and the National Latino Commission. 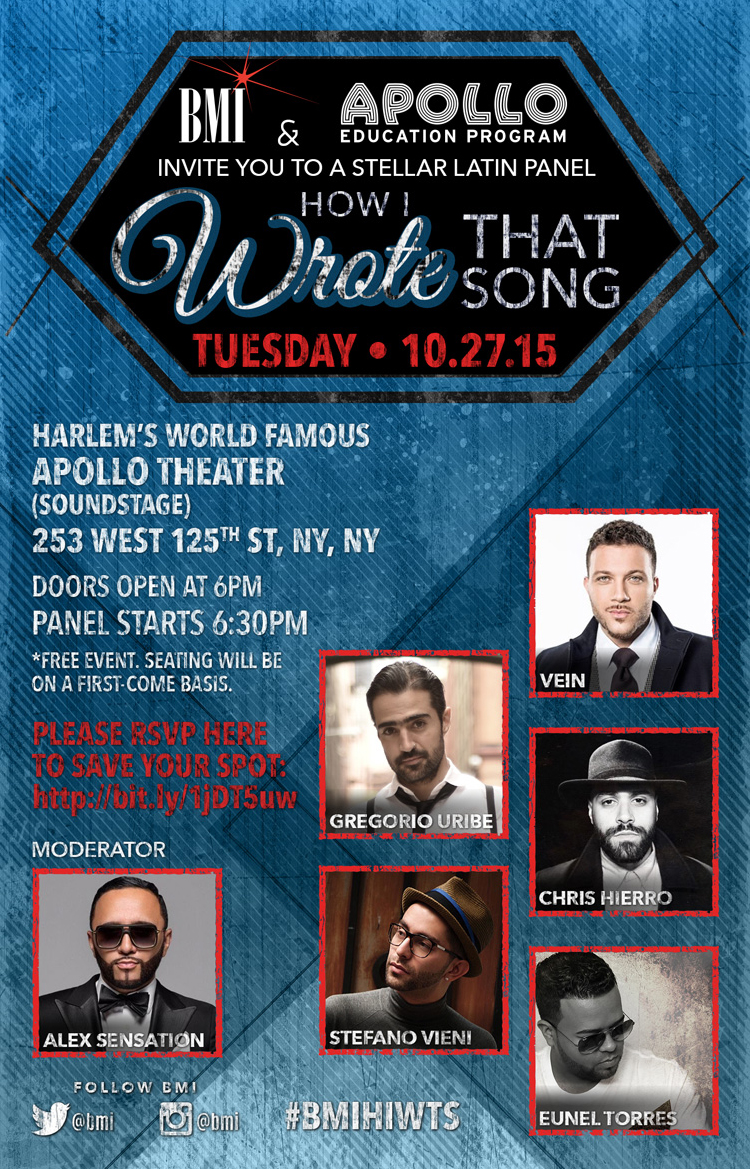