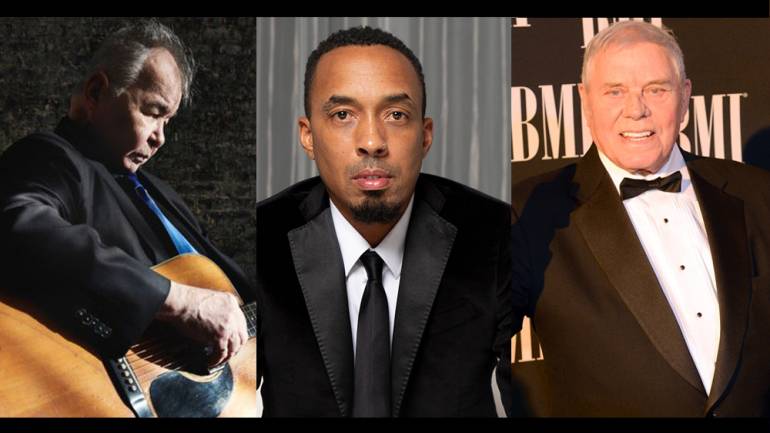 BMI is exceptionally proud of its affiliates being inducted into the Songwriters Hall of Fame for 2019. As announced on Saturday, January 12, the Hall will soon welcome in BMI songwriters Dallas Austin, Tom T. Hall and recent BMI Troubadour Award recipient John Prine. Dedicated to honoring the contributions of the composers and lyricists of the world’s most celebrated popular music, as well as nurturing the next generation of songwriters, the Songwriters Hall of Fame will celebrate its newest class at its 50th Annual Induction & Awards Gala on Thursday, June 13, 2019, at the Marriott Marquis Hotel in New York City.

The list of Dallas Austin’s songs that have penetrated the upper reaches of the Billboard charts is long and distinguished. Perennial singles like “Just Like a Pill” and “Don’t Let Me Get Me” by P!nk, “Motownphilly” by Boys II Men, “Secret” by Madonna, “Cool’ by Gwen Stefani, “Hit’Em Up Style” by Blu Cantrell, and several hits by TLC like “Creep” and “Unpretty” cemented Austin’s name as a formidable songwriter and producer. He has worked with a dazzling roster of luminaries like Aretha Franklin, George Clinton, Michael Jackson, Santana, Johnny Gill, Bjork, Fishbone, Grace Jones, Tricky, Usher, Shakira, Janet Jackson, Macy Gray, Duran Duran, Lionel Richie, Natalie Cole and many more, and his successes span genres and decades alike.

Boasting a distinctively American voice and sensibility, the songs of Tom T. Hall tell rich, detailed stories that have broadened the traditions of country music and enriched our culture. Hall wrote and recorded lovingly illustrated songs like 1972’s “(Old Dogs, Children and) Watermelon Wine” and 1973’s “I Love” that have become some of the most celebrated country music of all time, but his songs have also been recorded by titans like Johnny Cash, Lester Flatt & Earl Scruggs, Duane Eddy, Patty Griffin, Buddy Miller, George Jones, Gram Parsons, Eric Church and a host of others. From Jeanine C. Riley’s recording of “Harper Valley, P.T.A.” through Alan Jackson’s “Little Bitty,” Hall’s signature compositions strike at the heart of the American experience.

With two GRAMMYs and a BMI Troubadour Award among countless other accolades to his name, singer/songwriter John Prine is rightly revered as a living legend. Classic Prine songs like “Angel from Montgomery,” “Paradise,” “Sam Stone,” “In Spite of Ourselves” and “I Just Wanna Dance With You” have come to represent the veritable gold standard of songwriting. His composition “Love is On a Roll” achieved millionaire status and was a significant number one hit for Don Williams. Over his five-plus decades as a music creator, Prine’s works have been recorded by iconic names like Johnny Cash, Carly Simon, Bette Midler, Bonnie Raitt, Norah Jones, George Strait, Miranda Lambert, The Zac Brown Band and many more. As a songwriter, recording artist and live performer, Prine’s inimitable artistic impact continues to grow and inform Country, Folk music, Bluegrass, Americana and beyond.

Congratulations to these esteemed writers for their well-deserved accolades.