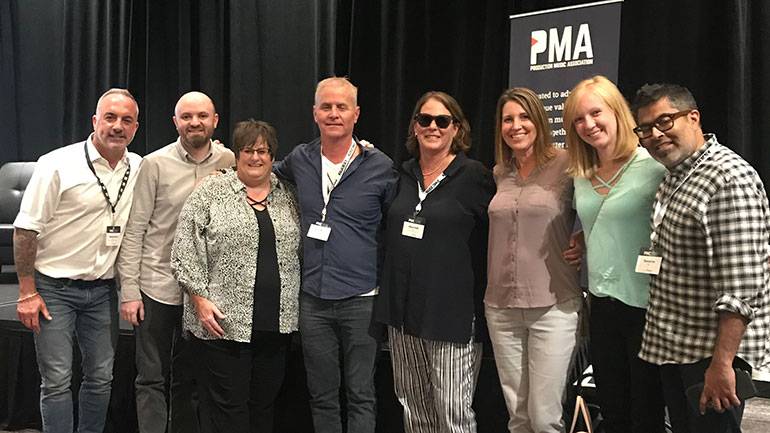 Executives and staff of BMI joined a slew of composers, publishers, and other industry professionals for two days of panels at the Production Music Association’s 6th annual Production Music Conference (PMC). BMI’s Michael Crepezzi reprised his role as judge and presenter for the 5th annual Mark Awards, presenting four awards, including Best TV Theme alongside SyncStories’ Cassie Lord. BMI was well-represented, with several executives featured on panels including Barbie Quinn on “Cue Sheets: From Production to Payment” and Anne Cecere moderating “The Creative Process for The Production Music Composer.” Additionally, Blake Neely, a well-noted and highly-respected BMI composer, broke down his workflow and how he manages multiple projects in “Writing for a Superhero Franchise.” Over the course of the PMC, BMI’s “booth” was bustling! BMI employees from the LA and Nashville offices were available to speak with current affiliates and answer questions, as well as speak with prospective future affiliates. Overall, the PMC was a smashing success for both the Production Music Association and the entire BMI team.

BMI has been a proud sponsor of the PMC since its inception in 2013. At the event, affiliates and industry leaders engage directly with BMI executives and staff to ask questions and seek guidance. The Production Music Association (PMA) is a non-profit organization with more than 670 music publisher members.