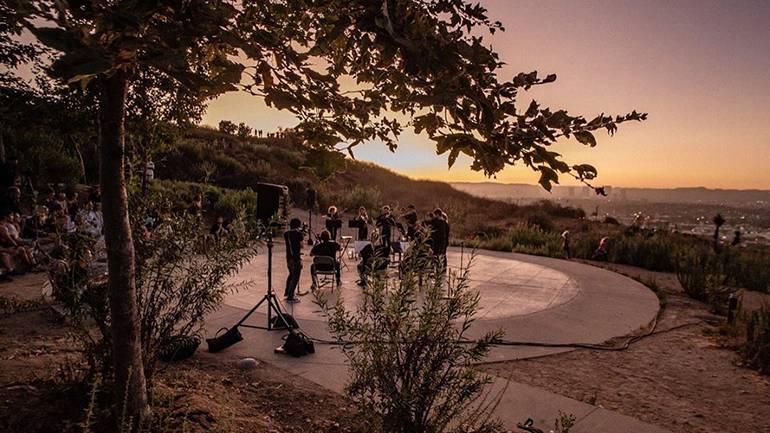 The sunset sets the tone for musicians to play by at “Intrinsic Strings.”

On August 24, at the Baldwin Hills Scenic Overlook in Culver City, CA, BMI supported “Intrinsic Strings,” a free concert that integrated live orchestral musicians and virtual reality in an exploration of what brings people together, empowers them and brings them joy. Featuring music by LA-based contemporary film and video game composers, Jeff Rona, Penka Kouneva, Drum & Lace, Emer Kinsella, Allyson Newman and Ben Coria, performers presented an evening of introspection and insight into how music can unite people and create community in large metropolitan areas.

Attendees traversed one of three paths to the top of the overlook and main concert area, while musicians comprised of instrumental string players and select unique instruments spread throughout the space creating a “musical trail.” Organizers of the event also partnered with Vresh, a 360° social media company, to integrate 360 degree visuals containing story concepts of how individuals engage with the city of Los Angeles, creating a “trail of stories.”

Intrinsic Strings was developed by Emer Kinsella of Emersion Music. The concert aims to bring awareness to internalized fear and isolation by encouraging Angelenos to find support and solidarity with one another, by embracing and conquering the climb to the overlook together.