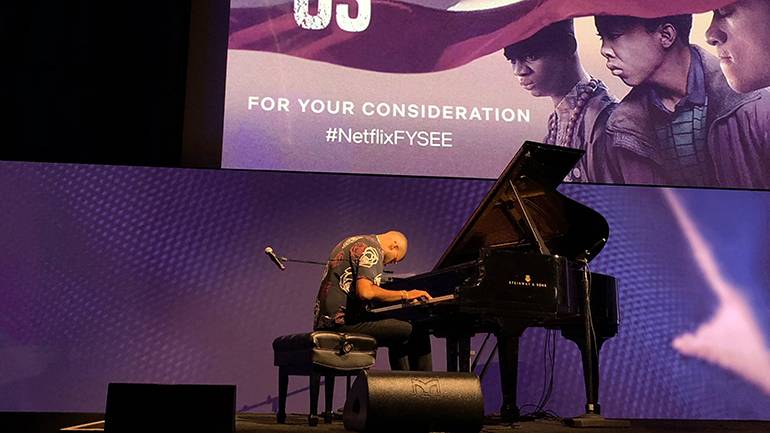 Kris Bowers performs music from “When They See Us.”

BMI composer Kris Bowers treated the audience to a performance of part of his score for When They See Us at a recent Emmy consideration screening of the first episode of the Netflix series in LA. The gathering also provided film goers with a Q&A discussion about the collaborative process between director Ava DuVernay and various departments, as well as a reception at the Netflix FYSee space at Raleigh studios.

In addition, BMI supported Bowers on May 30, with an intimate reception and performance at the Ross House in the Hollywood Hills. The event was a thank you to those who have been supportive and instrumental to Kris reaching this stage of his career, and an opportunity for him to connect with people he admires. The event included a multi-media performance, with homeowner/mixer John Ross manning the massive sound board of the newly remodeled theater in the Ross house. Bowers discussed the pieces he was performing from Green Book, Black Monday, and Monsters and Men. He also shared how much he was affected by “When They See Us,” which is about the Central Park Five, commenting that he wrote some of the music almost like a horror score because what was happening to these innocent young men was so frightening.