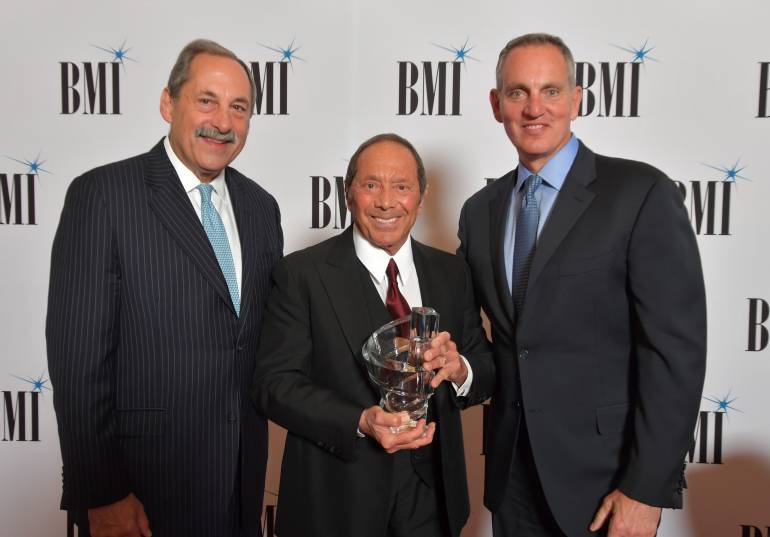 BMI was thrilled to celebrate legendary singer/songwriter Paul Anka at the 71st Annual BMI/NAB Dinner held last night at the Wynn Encore in Las Vegas. Anka was honored with the BMI Board of Directors Award for his immense impact on contemporary music.

BMI President & CEO Mike O’Neill presented the accolade to Anka in front of a room of industry heavy-hitters, commenting that they were “in the presence of music royalty.” He went on to say that Anka has an “unrivaled catalog of songs that have encouraged us to love, hope, reflect and celebrate life.”

Following a retrospective of his many career highlights, Anka brought the house down with a performance of his first hit song “Diana.”  He then gave a moving speech where he shared memories about some of his biggest hits and then absolutely delighted the audience with a special rendition of his signature hit “My Way,” during which he thanked BMI and the broadcast industry for their support throughout his illustrious career. He ended the evening with a performance of the original version of the iconic song, which was met with a standing ovation.

The annual BMI/NAB dinner is hosted by BMI’s Board of Directors and recognizes the mutually supportive partnership between the songwriting community and the broadcast industry. Past recipients of the BMI honor include Mike Post, Carrie Underwood, Dolly Parton, Willie Nelson, Graham Nash, Paul Simon, Carlos Santana, and John Williams, among others.

Boasting a timeless, resonant voice and a passion for creating music, Anka is both a consummate performer and remarkably prolific writer. With more than 500 songs to his credit, notable standards include “Put Your Head on My Shoulder,” “My Way,” “Puppy Love,” “Lonely Boy,” and “The Tonight Show Starring Johnny Carson,” the most recognized television theme song in history. Throughout his career, Anka’s songs have been performed over 100 million times worldwide and recorded by luminaries such as Frank Sinatra, Elvis Presley, Barbra Streisand, Tom Jones and Sammy Davis, Jr. Additionally, his own record sales total more than 90 million. As the only singer/songwriter in history to have a song in the Billboard Top 100 during seven consecutive decades, Anka is nothing short of a living legend.

Among his many accolades, Anka was honored in 2008 with the prestigious Johnny Mercer Award by the Songwriters Hall of Fame. In 2013, he published a New York Times bestselling autobiography, My Way, followed by an acclaimed album of collaborations called Duets, featuring contributions from Frank Sinatra, Michael Jackson, Tom Jones, Celine Dion and Michael Bublé. Just last year, Anka’s collaboration with Michael Jackson and Drake, “Don’t Matter to Me,” surfaced on the rapper’s album, Scorpion, earning over 400 million downloads and reaching the top 10 on Billboard charts, cementing Anka’s status as an extraordinary talent that spans genres and generations.