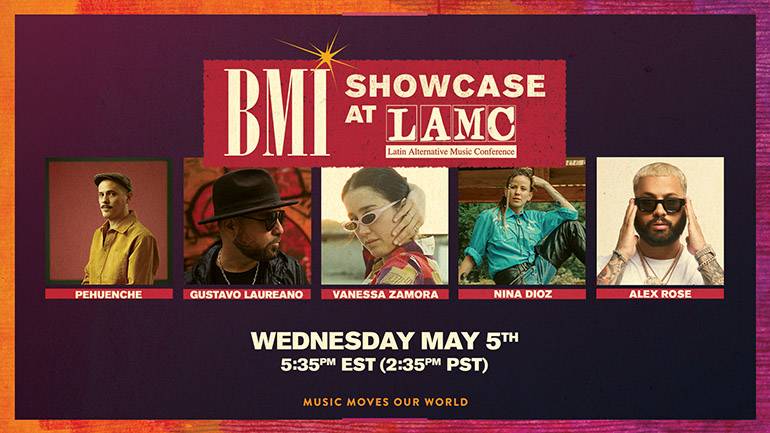 BMI is thrilled to present the “BMI Showcase” during the 22nd annual Latin Alternative Music Conference (LAMC) on Wednesday, May 5. The free virtual showcase will begin at 5:30PM ET and highlight performances by an eclectic group of songwriters including Alex Rose, Gustavo Laureano, Niña Dioz, Pehuenche and Vanessa Zamora. This year’s action-packed conference held May 4 - 7 will feature a variety of panels, Q&A’s, workshops and showcases. For more information and to view the BMI Showcase on May 5, go to latinalternative.com.

“BMI has been a proud supporter of the LAMC for years and our efforts are aligned in elevating and providing a platform for our Latinx songwriting community,” said Jesus Gonzalez, BMI’s Vice President, Creative, Latin. “This year’s BMI Showcase will shine a spotlight on some of the brightest and most diverse emerging talent in Latin music and will give viewers an opportunity to hear a fusion of unique sounds blending elements of hip-hop, trap, rock, pop, alternative and reggaetón.”

Alex Rose is a Puerto Rican artist signed to WK Records. The singer/songwriter is known for his unique R&B and Latin trap sound. He broke out in 2016 with the songs “Orgasmo” and “Percocet” remix, that gained him notoriety and established his name as “La Nueva Voz del Trap” and “El Nuevo Rockstar.”

Gustavo Laureano is a renowned Puerto Rican singer/songwriter, producer and multi-instrumentalist. He is the lead singer of the band La Secta Allstar, who have amassed chart-topping success with their GRAMMY-nominated hit “La Locura Automática,” which reached number one in more than 13 countries. Passionate about music since childhood, Laureano released his first solo album Kingcallero in 2007, and in 2018 he released his second solo album titled Laberinto. This album is a unique melting pot of urban sounds that draw inspiration from cumbia, hip-hop, trap, rock, reggae and reggaeton. Laureano has also collaborated with the likes of John Z, YoFred, Wisin and Yandel, Eddie Dee and Ricky Martin, among others.

Niña Dioz is steadily breaking down barriers and building her profile as Latin hip-hop’s premiere queer female MC. The Mexican rapper gained attention with the release of her album Reyna in 2018, and the success of her single “Tambalea” marked a new beginning for Dioz. That same year, she was featured as Billboard’s Latin Artist on the Rise. Dioz’s new album Amor, Locura y Otros Vicios, shows off her chameleon-like musical skills, traversing between perreo, Latin trap and R&B.

Vanessa Zamora is a Mexican singer/songwriter, producer and multi-instrumentalist. Her music explores sides of pop, guided by eclectic and psychedelic sounds. Zamora’s latest release “Dejarnos Ir” has already amassed over 1.4 million views on YouTube. Her unique,velvety voice paired with her onstage charisma makes it clear that she is a force to be reckoned with, and one of the most promising artists of her generation.

Pehuenche is a Mexican singer/songwriter whose unique sound is influenced by popular Mexican music and the rock, pop and folk sounds of the 60s and 90s. Pehuenche has performed at renowned music festivals including SXSW, Tecate Comuna, Festival Santa Lucía, Festival Rodante, Mexico Au Pied Du Courant in Canada and Machaca, among others. He has released an EP titled Vendaval and is currently working on his first studio album.