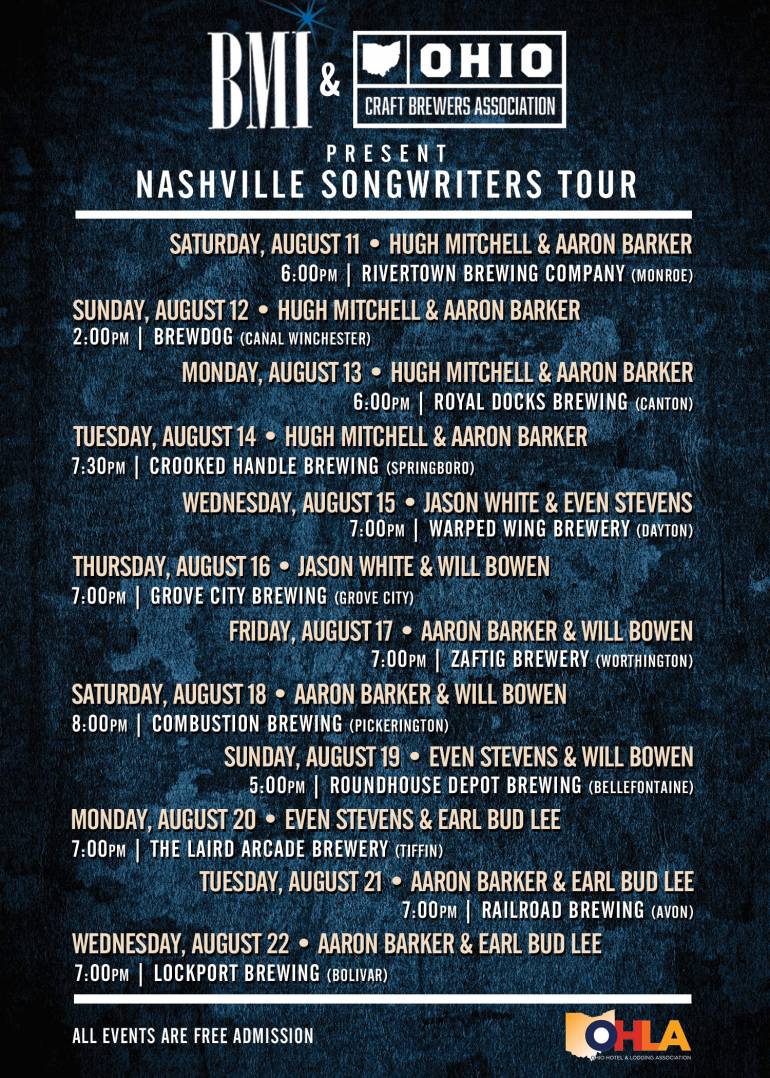 BMI is proud to announce that the Company is partnering with the Ohio Craft Brewers Association (OCBA) to bring great music, great beer and great people together for a special tour of free concerts in Ohio. From Saturday, August 11, through to Wednesday, August 22, BMI’s Nashville Songwriters Tour will crisscross the state, spanning cities from Avon to Dayton and more, while showcasing some of BMI’s top Nashville songwriters.

Each night will feature performances from two of the six BMI songwriters on tour, which includes Aaron Barker, Will Bowen, Earl Bud Lee, Hugh Mitchell, Even Stevens and Jason White. Pulling from a tradition made famous by the Bluebird Café in Nashville, the “songwriter in the round” acoustic performances will give concertgoers a rare opportunity to hear the stories behind some of country music’s biggest hits from the songwriters themselves.

Four out of the six songwriters are Ohio natives and collectively have written for country heavyweights such as Garth Brooks, George Strait, Blake Shelton, Kenny Chesney, Tim McGraw, and rising star, Devin Dawson, among others.

“There is something special about a summer night of live music,” said Dan Spears, BMI’s Vice President, Industry Relations. “BMI is thrilled to partner with the OCBA to bring some of Nashville’s best songwriters showcasing the value that music brings to eating and drinking establishments across the country.”

“Craft breweries often serve as the hub of their local communities. Beer and music are time-honored ways of bringing people together,” said Justin Hemminger of the Ohio Craft Brewers Association. “We are excited to work with BMI and hope this tour is one of many to come.”

Additional support will be provided by the Ohio Hotel & Lodging Association. Must be 21+ to enter.

Aaron Barker has written several songs for George Strait, including “Baby Blue” from the If You Ain’t Lovin’, You Ain’t Livin’ album, which went to #1 on the Billboard charts. Barker also wrote Strait’s chart-toppers “Love Without End, Amen,” “Easy Come, Easy Go” and Lonestar’s “What About Now,” while other songs of his have been recorded by Doug Supernaw, Clay Walker, Neal McCoy, Aaron Tippin and Willie Nelson. Barker was inducted into the Texas Heritage Songwriters’ Hall of Fame in 2007, as well as the Nashville Songwriters Hall of Fame in 2016.

Will Bowen is a GRAMMY-nominated singer/songwriter signed to Little Extra Music. As an artist, he has opened for such legends as Dave Matthews, Counting Crows, John Mayer, Maroon 5 and Train. With numerous credits as a songwriter, the Ohio native reached platinum status internationally with a song by Latin pop star Soraya Arnelas. Most recently, Will wrote the Casey James single, “Fall Apart,” and has had cuts recorded by Devin Dawson, Kelleigh Bannen, Due West and others.

Earl Bud Lee was born and raised in Ohio, but has been writing songs for more than 35 years in Nashville. From the anthemic “Friends in Low Places” by Garth Brooks to “One Night At A Time” by George Strait, to more recent hits like “Who Are You When I’m Not Looking” by Blake Shelton, Lee continues to write hit songs while still enjoying regular radio play from his earlier works, proving the timelessness of his work. Most recently, Randy Rogers Band covered his 34-year-old song, “Look Out Yonder,” with Alison Krauss and Dan Tyminski.

Hugh Mitchell:  Since his debut album Heartbreak Radio, Hugh Mitchell has discovered a style and voice all his own. Conscientious and intentional, he experiments with unique sounds to fulfill his smooth and intimate melodies. Having recently recorded his next album with former Wilco drummer, Ken Coomer, Mitchell plays solo, as well as with his trio made up of New Orleans musicians.

Even Stevens has a songwriting career that spans many years and stylistic borders from the multi-platinum international hit, “When You’re In Love With A Beautiful Woman” by Dr. Hook, to the three-week-running #1 pop hit, “I Love A Rainy Night,” recorded by longtime partner and superstar, Eddie Rabbitt. The Ohio native and GRAMMY-nominated songwriter has accumulated an incredible 53 BMI Awards, which include 14 Pop Awards, 26 Country Awards, a 5 Million-Air Award, a 4 Million-Air Award, a 3 Million-Air Award, four 2 Million-Air Awards, and six 1 Million-Air Awards, denoting how many radio spins the talented scribe has accumulated. Some of the other major artists who have recorded songs by Stevens include Tim McGraw, Kenny Chesney, Martina McBride, Mac Davis, Dolly Parton, Blake Shelton, The Oak Ridge Boys, Kenny Rogers, Marie Osmond, Crystal Gayle, Glen Campbell and Julio Iglesias, to name a few.

Jason White, raised in Cleveland, Ohio, is a man who defies typecasting. He’s a restless artistic spirit who refuses to be pigeonholed, but if pressed to describe his music, he calls it “American Hash,” a hodgepodge of the styles spawned in the U.S. that forever changed the world’s listening habits: the blues, country, jazz, soul, and rock ‘n’ roll. The songs that make up White’s ‘American Hash’ have been recorded by a fittingly eclectic group of artists including country legends Tim McGraw and Diamond Rio; alternative stylists Swan Dive and Liam Titcomb; soft-rock crooner Russell Hitchcock; string-band icons Old Crow Medicine Show; and pop/rock divas the Muddy Magnolias, among others.