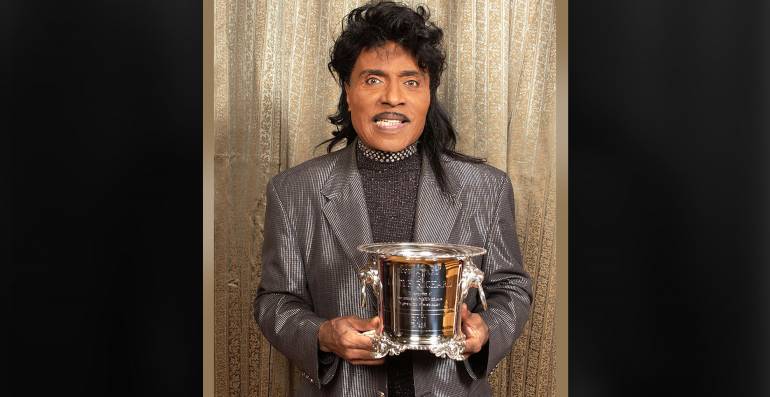 Little Richard accepts the Icon Award at the 50th Annual BMI Pop Awards in Los Angeles on May 14, 2002.

BMI is deeply saddened that world renowned rock n’ roll pioneer Little Richard passed away today in Nashville at the age of 87. Born Richard Wayne Penniman in Macon, Georgia in 1932, Little Richard not only forged a sound that would influence decades of songwriters, but also brought a bold theatricality to his performance style that acted as a generational flashpoint, heralding that rock n’ roll was not just a trend, but rather a cultural movement that was here to stay.

The legendary singer/songwriter first emerged on the music scene when he signed with RCA Records in 1951. Soon after, his career skyrocketed bringing with it international fame. An unforgettable piano player, Little Richard’s songs showcased a level of innovation and excitement that legions of musicians still seek to emulate today. His works seamlessly fused elements of R&B, blues, soul and gospel into an explosive style of rock n’ roll that was both irresistible and timeless. Marked by an assertive and elastic voice that could not be contained, Little Richard’s music immediately left an indelible impression. “Tutti Frutti” was his first major success in 1955, which paved the way for a string of chart-topping hits including “Long Tall Sally,” “Rip It Up,” “Lucille,” “Jenny, Jenny,” “Keep a Knockin’,” “Good Golly, Miss Molly,” and “Ooh, My Soul,” leading to tens of millions of albums sold worldwide.

Later in his career, the longtime BMI affiliate would have yet another breakout hit with “Great Gosh A Mighty,” tirelessly tour the world, and work extensively on multiple recording projects, soundtracks and commercials. His accolades include induction into the Rock and Roll Hall of Fame and the Songwriters Hall of Fame, a star on the Hollywood Walk of Fame, the Lifetime Achievement Award from the National Academy of Recording Arts and Sciences, the Rhythm and Blues Foundation’s Pioneer Award, the BMI Icon Award, and many more.

Little Richard’s legacy built the foundation of rock n’ roll and informed subsequent luminaries as Elvis Presley, Jerry Lee Lewis, The Beatles, The Rolling Stones, Led Zeppelin, David Bowie, Prince and countless others. Simply put, without Little Richard, rock n’ roll would not be a fraction of the transformative art form it is today. And while the world mourns the loss of a true icon, his singular creativity and musical impact will endure.

Little Richard will be dearly missed by his friends and fans at BMI.