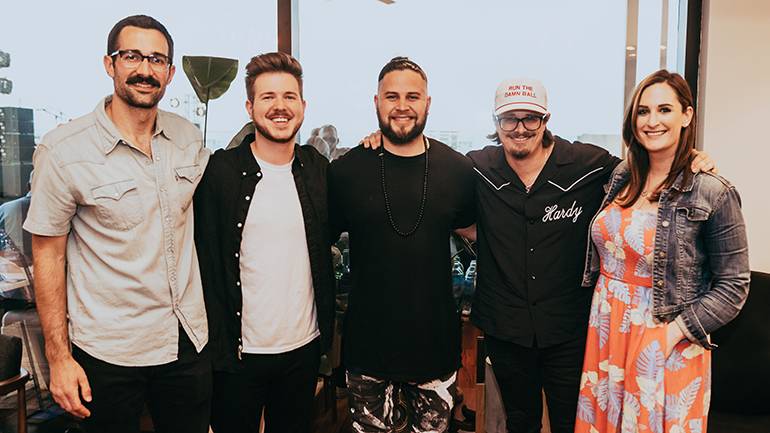 On Tuesday night, April 23, BMI kicked off its third season of Rooftop on the Row, the popular Music Row Summer Concert series. Hosted by BMI with the support of sponsors George Dickel Tennessee Whisky, NASH FM 103.3 and 95.5 NASH ICON, Music Row’s tastemakers and industry professionals were treated to performances from up-and-comers HARDY and Filmore.

Big Loud Records / Tree Vibez Music artist HARDY is fresh off the heels of the wildly successful If I Know Me tour as direct support to chart-topper and fellow BMI songwriter Morgan Wallen. HARDY closed out 2018 with his first two #1, PLATINUM-certified hits as a songwriter, “Simple” by Florida Georgia Line and “Up Down” by Morgan Wallen featuring the GRAMMY-nominated duo. The in-demand songwriter turned artist treated the crowd to his rowdy debut single “Rednecker” as well as an acoustic snippet of the current Blake Shelton single “God’s Country,” one of the five tracks HARDY has written on this week’s airplay charts. You can catch him on the Can’t Say I Ain’t Country Tour this summer with FGL, Dan + Shay, and Morgan Wallen.

CURB Records recording artist Filmore closed out the night with his single “Slower,” which just went for radio adds this week. Before signing with Curb | Word Entertainment in late 2018, Filmore was the only independent artist to ever be the face of the Hot Country playlist on Spotify, one of the largest and most listened to playlists worldwide on the platform. “Slower” has been featured on Apple Music’s New Country playlist and has has garnered over 26 million streams on Spotify to date. You can catch Filmore at the Stagecoach Country Music Festival this weekend.

Fans can find both artists at the 24th annual Key West Songwriters Festival Presented by BMI in May. For more information on the KWSF, visit www.keywestsongwritersfestival.com or click here.