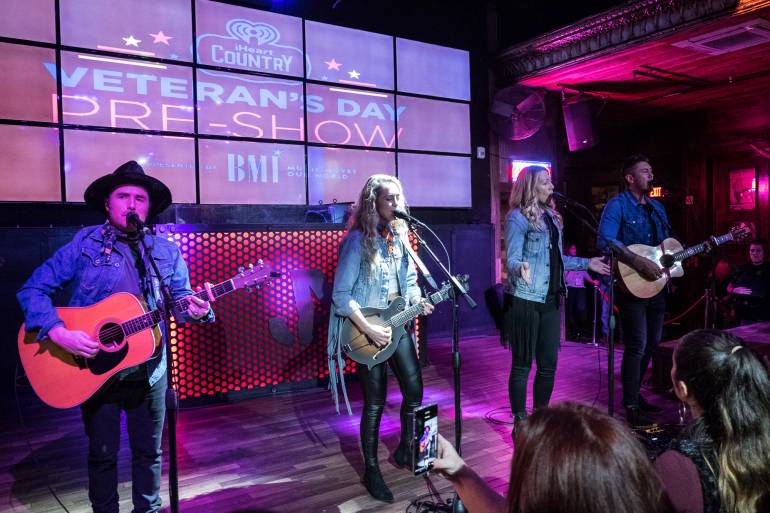 BMI was very proud to support iHeartCountry One Night for Our Military, a special tribute for the 100th observance of Veterans Day. As a means of honoring the nation’s heroes, iHeartMedia organized this exclusive concert event for veterans and their families, headlined by Jason Aldean, Kelsea Ballerini and Scotty McCreery at the Country Music Hall of Fame in Nashville on Thursday, November 7. Now in its second year, this special concert hosted 750+ attendees, including many from nearby military bases Fort Knox and Fort Campbell. McCreery, who also served as the evening’s host, brought the message of the evening to heart by thanking these special attendees and inviting them to share stories of their service with iHeartCountry stations.

To kick off this tribute, BMI sponsored a special pre-event, the BMI Guitar Pull, live from Jason Aldean’s Kitchen. Award-winning BMI singer/songwriter Jeffrey Steele joined McCreery and Gone West for an unforgettable performance for an audience of veterans and their families and friends. Comprised of two songwriting couples, Colbie Caillat and Justin Young, and Jason Reeves and Nelly Joy, Gone West is a burgeoning Nashville supergroup that dropped an acclaimed debut EP, Tides, back in January. A longtime Nashville favorite, Jeffrey Steele is an accomplished and prolific songwriter responsible for hits by names like LeAnn Rimes, Faith Hill, Tim McGraw, Trace Adkins, Rascal Flatts, Steve Holy and many others. Since winning the tenth season of American Idol in 2011, Scotty McCreery has released four studio albums and sent singles like “See You Tonight,” “Five More Minutes” and “The Trouble With Girls,” among others, up the charts All three acts brought the crowd to its feet at the BMI Guitar Pull, setting the stage for the Veterans Day salute later that evening.

Tune-in to watch iHeartCountry One Night for Our Military, presented by Roche Diabetes Care, on Veterans Day, Monday, November 11 at 7pm ET only on @livexlive: https://ihr.fm/iHeartOurMilitary #iHeartOurMilitary