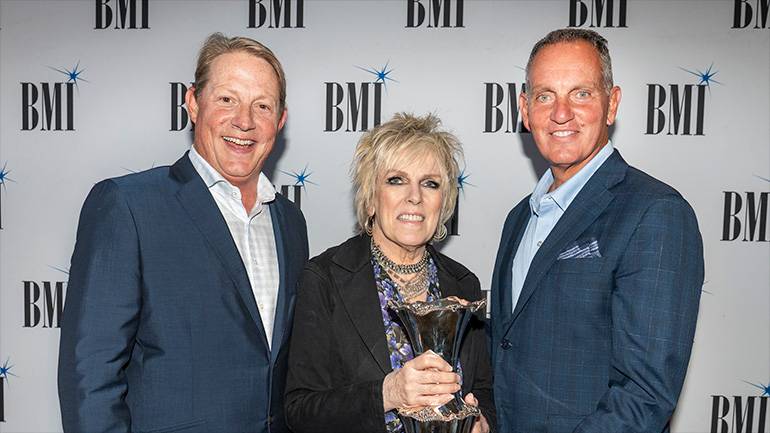 BMI celebrated its annual Troubadour Awards at the iconic BMI Nashville office Monday evening. The ceremony honored legendary singer-songwriter Lucinda Williams and her astounding career in the music industry. The private dinner featured performances from Billy Gibbons of ZZ Top, Jason Isbell, Amos Lee, Angel Olsen, and Madeline Edwards, who paid musical homage to Lucinda and her groundbreaking music, showcasing her influence over a diverse group of songwriters and performers.

“Lucinda’s influence crosses all genres because her songs are trustworthy, allowing the listener to have faith in her message,” says Clay Bradley, VP, Creative, Nashville. “Her songs are an educational experience. The craft of her songwriting is embedded in the way that it makes you feel.”

In the musical tribute to Lucinda, newcomer Madeline Edwards performed “Passionate Kisses,” which was a hit for Mary Chapin Carpenter in 1993 and earned both women a GRAMMY award in 1994. Angel Olsen gave a rendition of “Fruits of My Labor”; Amos Lee moved the crowd with his version of “Little Angel, Little Brother”; Jason Isbell and Sadler Vaden performed the perennial favorite “Drunken Angel” from Lucinda’s landmark album Car Wheels On A Gravel Road, and ZZ Top’s Billy Gibbons brought the house down with a rocking version of “Changed the Locks” to wrap up the night’s performances.

As the evening continued, legendary producer and writer Bill Bentley spoke about Lucinda. “I love Lucinda Williams, and my journey next to her and watching her has been one of the thrills of my life,” said Bentley. “She has brought a little bit of heaven into my soul.”