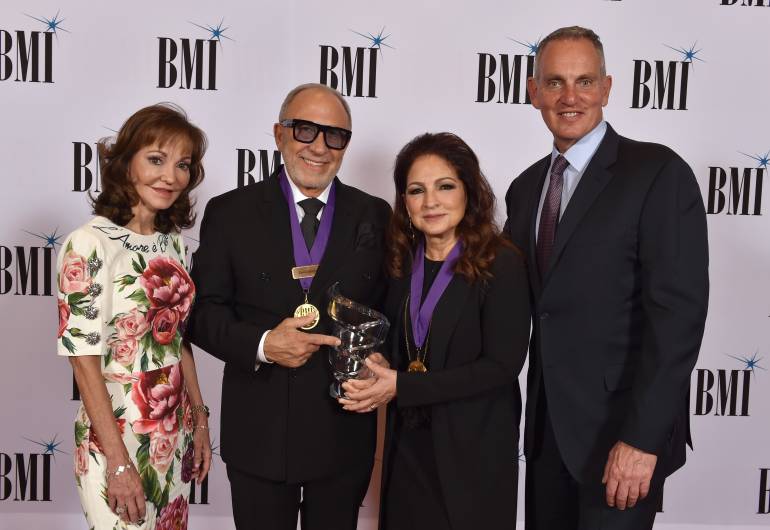 BMI was thrilled to celebrate world-renowned superstars Gloria and Emilio Estefan at the 72nd Annual BMI/NAB Dinner held last night at the Encore Las Vegas.  The legendary songwriting couple was honored with the BMI Board of Directors Award for their incomparable body of work and groundbreaking influence in introducing Latin music to a global audience.

Caroline Beasley, Chairperson, BMI Board of Directors and CEO, Beasley Media Group and Mike O’Neill, President & CEO, BMI presented the accolade to the Estefans, celebrating the couple’s musical legacy and impactful career, which has spanned more than five decades. O’Neill praised the incomparable duo as “true visionaries” and went on to thank them for inspiring so many throughout their illustrious career, and for “paving the way for countless artists to follow.”

As a special tribute to The Estefans, Ana Villafañe, the star of the acclaimed Tony-nominated Broadway musical On Your Feet!, brought the house down with her renditions of “Rhythm is Gonna Get You/1-2-3,” “Anything for You” and “Mi Terra” backed by the beats of the iconic Miami Sound Machine. Immediately following the electrifying performance, The Estefans gave a moving speech and thanked BMI and the broadcast industry for their support throughout their career.

Over their groundbreaking careers, The Estefans sold more than 100 million albums, had 38 #1 hits on the Billboard charts and garnered legions of fans worldwide across multiple generations.  The dynamic pair rose to global fame in 1985 with their group Miami Sound Machine’s first hit song, “Conga,” which debuted on Billboard’s Hot 100 chart and made its way to No. 10 in 1986.  Other mega hits from the group include “Rhythm is Gonna Get You,” “1-2-3,” “Words Get in The Way,” and “Anything for You.”

Gloria went on to become the most successful Latin crossover artist in the history of pop music with several of her ballads reaching No. 1 on Billboard’s Adult Contemporary chart, including “Coming Out of the Dark,” “Cuts Both Ways,” “Here We Are,” and “Words Get in the Way.” In addition to helping his wife rise to fame, Emilio helped developed the careers of Shakira, Ricky Martin, Jennifer Lopez, Marc Anthony, and many other Latin pop artists.

Over the years, Gloria and Emilio have collected the industry’s highest accolades. Together they’ve won 26 GRAMMYs, the Songwriters Hall of Fame Lifetime Achievement Award, the Presidential Medal of Freedom and the Library of Congress Gershwin Prize for Popular Song, among others. BMI also honored Gloria with the BMI Icon Award in 2009 and presented both Gloria and Emilio with the BMI President’s Award in 1996. They also have a combined 35 BMI Awards and have 13 songs each with over one million broadcast performances.

The annual BMI/NAB dinner is hosted by BMI’s Board of Directors and recognizes the mutually supportive partnership between the songwriting community and the broadcast industry. Past recipients of the BMI honor include Paul Anka, Graham Nash, Willie Nelson, Dolly Parton, Mike Post, Carlos Santana, Paul Simon, Carrie Underwood and John Williams, among others.