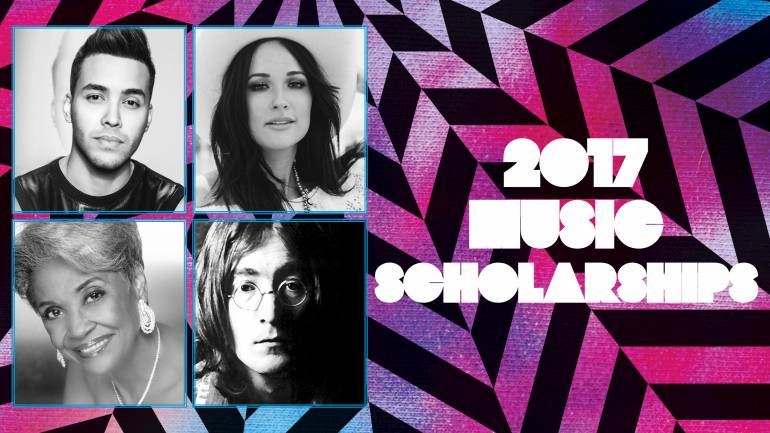 “We are thrilled to announce our largest scholarship season to date in support of young composers, songwriters, and broadcasters across the country," said BMI Foundation President Deirdre Chadwick. "Our historic awards provide not only financial assistance, but also the encouragement and industry opportunities young creative artists need to succeed."

Program applications must be completed online no later than Wednesday, February 1, 2017 at 11:59 pm EST. For complete details and to apply, please visit http://bmifoundation.org/programs. Below is a complete list of BMI Foundation 2017 scholarship season competitions, as well as the 2016 award recipients.

BMI Founders Award for Radio Broadcasting
The second annual BMI Founders Award competition is open to radio broadcasting students age 17 - 24 nationwide. A $5,000 scholarship will be awarded for the best original essay response. The program was established in 2015 to recognize future innovators in broadcast radio, and commemorates the group of radio industry leaders who founded Broadcast Music, Inc. in 1939. Read about the 2016 winner here.

BMI Future Jazz Master Scholarship
The third annual BMI Future Jazz Master Scholarship competition is open to jazz performers age 17-24 attending colleges and universities nationwide. The $5,000 award was established in 2015 in honor of the National Endowment for the Arts Jazz Masters Fellowship. A panel of Jazz Masters will select the winner based on evidence of talent and potential as a jazz performer. BMI writer and NEA Jazz Master Nancy Wilson lends her support as the honorary spokesperson for this year’s competition. Read about the 2016 winner here.

BMI Student Composer Awards
The 65th annual BMI Student Composer Awards will award $20,000 in prizes to young composers engaged in the study of classical music. Co-sponsored by BMI and the BMI Foundation, the competition is open to all composers studying classical music who are age 27 or younger and citizens of the Western Hemisphere. Classical music luminaries such as John Adams, Aaron Jay Kernis and Augusta Read Thomas received their earliest recognition through this program. Read about the 2016 winners here.

John Lennon Scholarships
The 20th annual John Lennon Scholarships will award three prizes totaling $20,000 to U.S. college-student songwriters (age 17 to 24) for the best original songs submitted to the competition. Established in 1997 by Yoko Ono in conjunction with the BMI Foundation, this scholarship program honors the memory of one of the preeminent songwriters of the 20th century and has become one of the nation’s most esteemed accolades for emerging artists. Read about the 2016 winners here.

Nashville Songwriting Scholarship
The Nashville Songwriting Scholarship is an annual competition established in 2015 to support aspiring country music artists nationwide. A $5,000 scholarship will be awarded for the best original song in any of the following genres: Americana, blues, bluegrass, contemporary Christian, country, folk, and roots. The contest is open to students between the ages of 17 and 24 who are enrolled in any college or university located in the United States. GRAMMY-winning recording artist and BMI songwriter Kacey Musgraves has endorsed the competition. Read about the 2016 winner here.

peermusic Latin Scholarship
Established by music publisher Ralph Peer II and generously funded by peermusic, the 14th annual peermusic Latin Scholarship competition will award a $5,000 scholarship for the best original song or instrumental composition in any Latin genre. The contest is open to students between the ages of 17 and 24, who are enrolled in any college or university located in the United States or Puerto Rico. Multi-platinum bachata artist and BMI songwriter Prince Royce serves as honorary spokesperson for the competition. Read about the 2016 winner here.