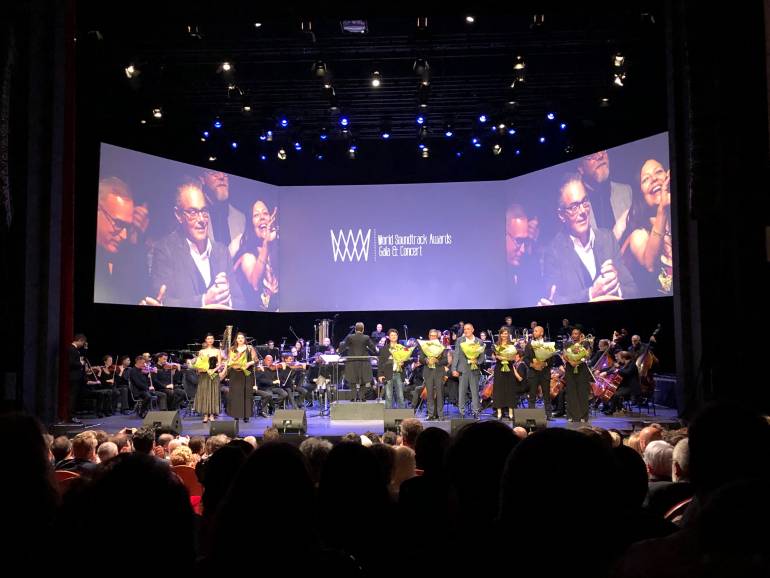 The night’s winners take the stage at the World Soundtrack Awards in Ghent.

Several BMI composers were honored in Ghent on October 18, with wins in a variety of categories for World Soundtrack Awards, including Best Original Song Written Directly for a Film. In addition to taking the Oscar earlier this year, “Shallow” from A Star is Born, written by BMI songwriters Lady Gaga, Andrew Wyatt and Mark Ronson, along with Anthony Rossomando, once again took the top prize.

Other equally notable wins included BMI composer Hildur Guðnadóttir who took home the trophy for Best Television Composer of the Year highlighting her outstanding work on Chernobyl, as well as SABAM Award winner for the Most Original Composition by a Young International Composer,Pierre Charles. The SABAM competition required the contestants to compose music for Nicolas Roeg’s occult thriller Don’t Look Now.

During the international festival, there were also a number of informative events, including a Composer Talk with Best Television Composer of the Year Hildur Guðnadóttir, who shared her insights on the film music industry. The highly anticipated concert also featured music by last year’s Discovery Award winner, BMI composer Tamar-kali (*Mudbound***)**, performed by the Brussels Philharmonic and conducted by Dirk Brossé.In addition,  Pierre Charles’s winning music was performed during the gala.