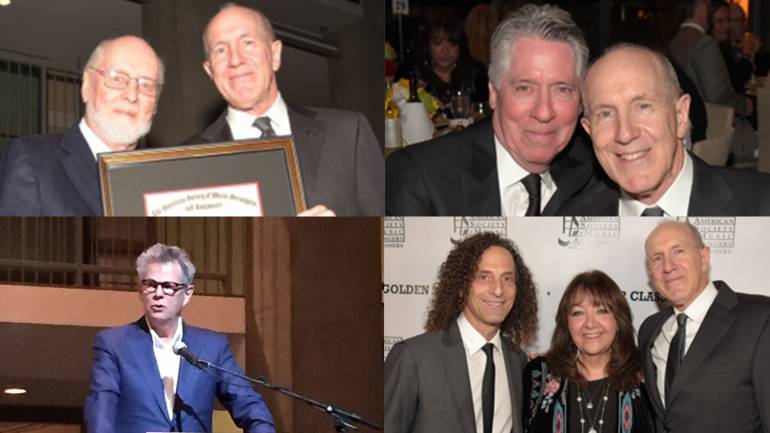 BMI’s Doreen Ringer-Ross, along with more than 300 members of L.A.’s musical community, filled the Skirball Cultural Center on Sunday, November 6, to honor esteemed BMI composer William Ross, who was one of the American Society of Music Arrangers and Composers prestigious 2016 Golden Score award winners. Ross, who is a four-time Emmy winner with film scores that include Tin Cup, The Tale of Despereaux, The Evening Star, Tuck Everlasting and My Dog Skip, is also the renowned music director for the always popular Oscars ceremony. He was presented with his coveted trophy by legendary BMI composer John Williams, with whom he collaborated on the iconic Harry Potter and the Chamber of Secrets. With this new honor, Ross joins an elite list of previous recipients including Williams, Elmer Bernstein, Henry Mancini, Michel LeGrand, Dave Grusin, Van Alexander, Michael Giacchino, John Debney, Conrad Pope, and Randy, David and Thomas Newman.

Among the many to congratulate Ross were award-winning BMI composers Alan Silvestri and David Foster, as well as other noted artists and writers that paid homage via video to Ross’ brilliance as an arranger, orchestrator, and musical director who has been a magical force behind many of their careers, including Barbra Streisand, Andrea Bocelli, Celine Dion, Josh Groban and Michael Bublé, lyricists Marilyn and Alan Bergman, musician Kenny G, conductor Gustavo Dudamel and fellow composer Sean Callery.

Congratulations, William, on an honor well-deserved!