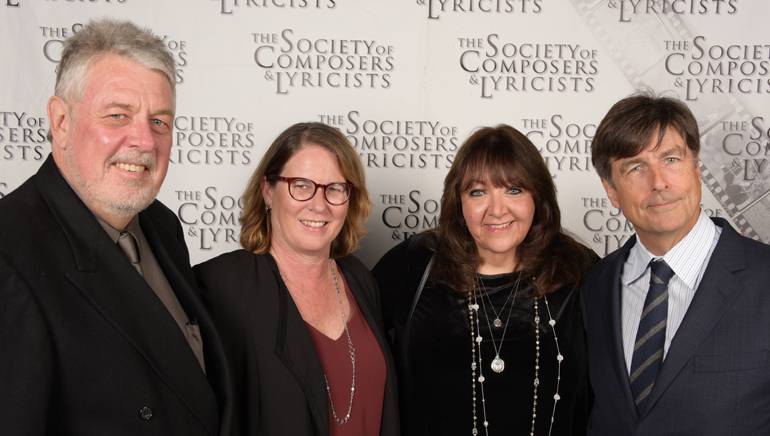 The Society of Composers & Lyricists provided yet another milestone for renowned BMI composer Thomas Newman, who was inducted as an SCL Ambassador at the organization’s 28th annual holiday dinner Wednesday, December 14. The dinner, which took place at the Skirball Cultural Center in LA, was filled with tributes and performances honoring this year’s new inductees. With this latest accolade, Newman joins other SCL honored Ambassadors that include BMI composers Lalo Schifrin, James Newton Howard, Dave Grusin, The Sherman Brothers, Leiber and Stoller and Mark Isham, among others. The prestigious honor was established to recognize screen composers, lyricists and songwriters whose musical contributions have had a significant impact in films, television, and video games. During his impressive career, Newman has scored more than five dozen feature films, 13 of which received Oscar nominations including box office blockbusters The Shawshank Redemption, American Beauty, Finding Nemo, Saving Mr. Banks and Skyfall, among others. Other honors include winning three Golden Globes, two BAFTA’s, one Emmy and six GRAMMYs, two of which he earned for his music to the iconic television series Six Feet Under. In addition to writing for both screens, Newman has also been commissioned by esteemed orchestras to compose music for the concert stage.

Among others from the BMI team, BMI’s President and CEO Mike O’Neill was also in attendance to pay tribute to Newman’s immense talent, achievements and support of the next generation of composers. Newman’s music has been represented by BMI since 1974.