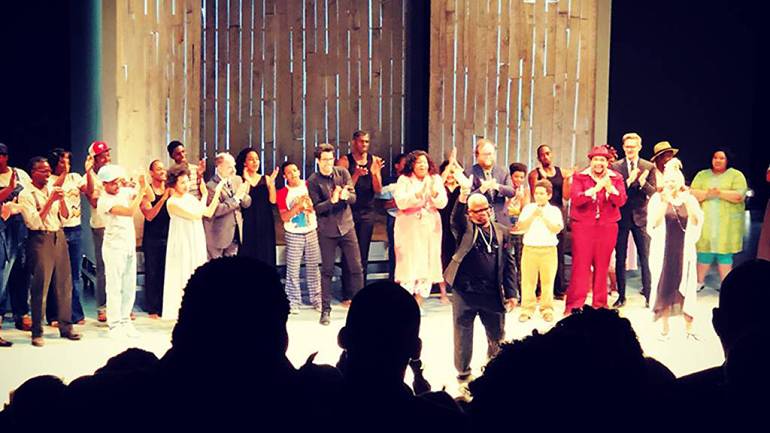 Pictured during the long-standing ovation for “Fire Shut Up in My Bones” at the World Premiere with Opera Theatre of Saint Louis is award-winning BMI composer Terence Blanchard with cast members.

In June of 2019, GRAMMY-winning jazz musician and BMI composer Terence Blanchard’s magnificent work Fire Shut Up in My Bones, with libretto by Kasi Lemmons, made its riveting World Premiere with Opera Theatre of Saint Louis. The work was originally requested as part of the Theatre’s commitment to commission new operas that reflect the diversity of modern American experience. Now, the illustrious Metropolitan Opera in New York City is opening its 2021-2022 season with the work marking the Met’s first performance of an opera by a Black composer.

Based on the memoir of celebrated writer and New York Times columnist Charles Blow, Fire Shut Up in My Bones follows the story of a young boy growing up in a tiny town where slavery’s legacy and violence is closely felt and relayed by the elders around him. His mother, a fiercely driven woman who can take care of herself, is unfortunately helpless to protect him from the sexual abuse of an older cousin. Years of tumultuous anger and self-doubts follow, until the grown man must gut-wrenchingly decide to either perpetuate the cycle of violence himself or find a way to finally move past it.

The Met Opera’s opening night of Fire Shut Up in My Bones is September 27, with additional dates to be found here.