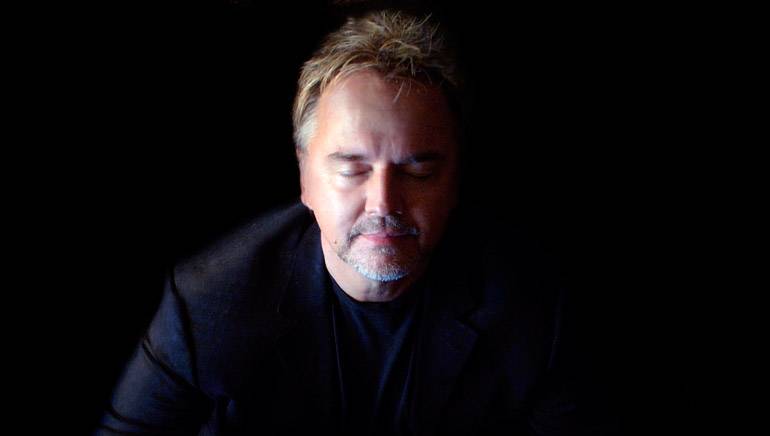 Like any great artist, great songwriters have the ability to create something that stirs emotion in the listener. These emotions certainly vary by individuals – one person’s breakup song may be another person’s wedding song – but the experience of following the songwriter on an emotional sonic journey can be an intimate one, even if the listener is never in the same room as the writer.

For Maui-based composer Peter Kater, this intimacy and emotion is so integral to his music that his favored live experience involves placing him as closely as possible to his listener: He invites them under his piano.

“I realized that I really like playing for individuals one at a time, and I like it when they lie under my piano,” Kater explains, noting that he improvises the pieces and allows them to be shaped by the people he shares them with. “I’m sensitive to energy and I’m sensitive to people, so depending on what the person is going through and depending how I feel about the person, it changes how I play.”

The Munich-born, New Jersey-raised pianist and composer is no stranger to trying new things, musically, and his seemingly supernatural ability to play with such depth and emotion has drawn fans from around the world for nearly four decades. Kater has released more than 70 recordings since 1983 and he’s scored music for over 100 television and film productions, and for 11 on- and off-Broadway plays. He has 13 GRAMMY nominations under his belt, and he won his first GRAMMY this year for “Best New Age Album” with his Dancing on Water.

Despite his incredibly prolific career, as a child, Kater didn’t really want to play piano — that was his mother’s idea. He took classical lessons for several years, and says that while playing the piano came easily to him, he didn’t like it.

“I didn’t work that hard on it,” Kater says. “But I started really getting into music when I was teenager, when I had a music teacher who taught me how to improvise. That’s when I realized a passion of mine.”

Kater left New Jersey and moved to Colorado at age 18, and for the next six years he honed his craft of improvisation in clubs and bars, playing five nights a week, four hours a night.

“One night I was improvising, and a guy comes up to the piano with a $20 bill in his hand,” he recalls. “I thought he was going to ask me to play a standard, but he asked me to play the thunderstorm. So I did — I improvised a thunderstorm for him. Then he asked me to play an afternoon on the beach. And he kept putting $20 bills on the piano. He got it, and he got that I could tap into different feelings and landscapes. That was really cool, because most people want to hear something they recognize.”

Despite such early connections with listeners, Kater admits that he didn’t really think he had a future in music because he didn’t play contemporary jazz and he wasn’t writing lyrics.

“I didn’t really think there was a market for the kind of music I was doing, and then someone turned me on to Keith Jarrett,” Kater recalls. “He’s like the master of improvising, so it kind of gave me permission to keep doing what I was doing. I was living in Boulder at the time, and a lot of jazz players around Denver were criticizing me, and it irked me that they had this attitude. So I decided to write some music that was more in the contemporary jazz genre — I almost did it just to show them I could do it, you know what I mean? [Laughs.] And I got very lucky; it started charting on the national jazz charts.”

Kater’s first album, Spirit, a solo piano album, was the first of four top-10 contemporary jazz albums in a row. While he found success in the genre, he still felt the need to make the kind of music that came from his heart. He welcomed collaborations with other artists such as Dan Fogelberg, Kenny Loggins, John Denver, Sting guitarist Dominic Miller, and lauded Native American flutist R. Carlos Nakai.

“I thought it was just amazing, the sounds [Nakai] got out of this little wooden flute, so I started playing piano with it,” he explains. “We recorded an album [Natives], but I didn’t think anyone would be interested in it. That record sold 10 times as much as any of my contemporary jazz albums. It wasn’t pop, it wasn’t jazz, and it became this whole thing of me just really trusting my creative instinct more and doing projects that I felt like I needed to do for myself without any ulterior motive.”

His strong trust of his creative instinct drew opportunities to work with artists in other genres and mediums, such as playwrights and Hollywood film and TV producers. His work has appeared in Broadway shows (Burn This, The Seagull) movies (Natural Born Killers, Scenes From a Mall), documentaries (10 Questions for the Dalai Lama, Sirius), and television (Civil War: The Untold Story, How the West Was Lost).

“I do what I get asked to do,” he explains. “It’s funny; generally, I don’t go out soliciting work. People just come to me and say, ‘I’m doing a documentary’ or ‘I’ve got a Broadway show and I’d love your music in it.’ My whole life has been that way — I always show up and say I can do it even if I have no idea what ‘it’ is, you know? [Laughs.] I just always say yes, even when I’ve felt like I was in way over my head. And that’s the way it’s always been.”

As Kater looks back on his career, he notes that his “mellowest” records were the ones that sold the best. He released a “healing series” of albums to promote healing and transformation.

“People really have a need for music that is calming,” he explains. “Music can be an egocentric profession a lot of the time; whereas, music for the healing arts that supports someone through a transformational journey can’t be about you at all. The music can’t be too controlling; you want to have enough space so whoever is listening can fall into the music. I think my bestselling album ever is this album called Compassion, which is an hour and 15 minutes of uninterrupted music that is so mellow.”

Though Kater has played notable venues such as Red Rocks Amphitheatre, Carnegie Hall and the Kennedy Center, his music often calls for a more intimate listening environment, which is how Kater was drawn to the idea of performing for an audience of one.

“I think it’s easier playing smaller venues,” he says. “When I play in larger venues, it’s almost overwhelming. There are so many people out there, and it’s hard to find a personal connection. Since my music comes from a more personal place — it’s not like rock and roll — I’ve found that I really enjoy doing more intimate things, which is what led to me playing for one person. It’s funny, because I went from wanting to play larger venues to really enjoying the smaller venues, and then I started doing a lot of home concerts, where I found a connection with the audience. People would ask questions, and it was a shared experience. That led to the idea of playing for one person at a time, because it couldn’t be more intimate than that.”

The exercise of playing for an audience of one is what led Kater to his GRAMMY-winning album with Dancing on Water, a record that he had never intended to make, let alone release.

“I was playing for individuals one at a time — they’d lie under my piano — and I recorded the sessions,” he explains. “I played for them for 15 to 25 minutes. After about a year of doing this, I had all this recorded material and some of it was really good. I picked out my nine favorite passes, edited the beginnings and endings, and I put them together on the record. All of the songs have a distinct personality, even though they’re all just solo piano, and they’re all improvised.”

Despite his recent GRAMMY win, Kater isn’t resting on his laurels. He has an album coming out in March, and he is organizing a retreat called “The Art of Presence” in Montana this summer. He remains a committed environmentalist — he’s worked extensively with Greenpeace, the National Wildlife Federation, the Nature Conservancy, and the United Nations, who awarded him with their Environment Leadership Award. Just as he recognizes the importance of finding connections with fans through his music, he appreciates his connections on the business side, particularly with BMI. He says he enjoys personal relationships with lots of BMI staff.

“For a huge company, they’re very friendly,” he enthuses.