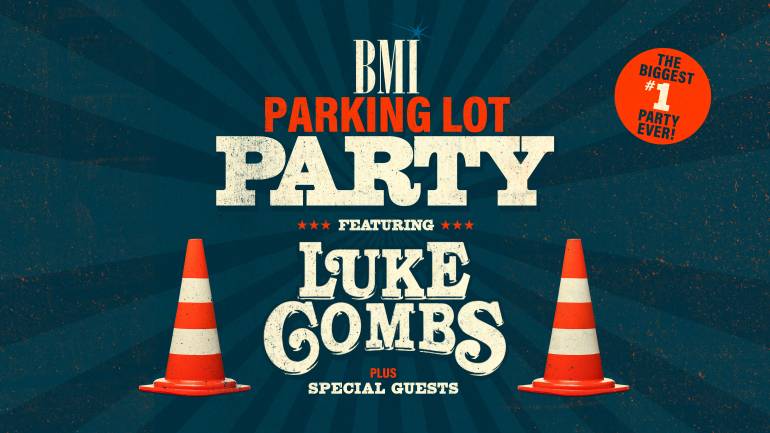 BMI will host its biggest Number One Party ever, celebrating Country Music superstar Luke Combs, 11 hit songwriters and thousands of Country music fans in a special concert taking place June 8 in the BMI Parking Lot. This one-of-a-kind event will commemorate Combs’ last eight Number One singles with a unique live concert taking place in the heart of Nashville’s Music Row. Combs, the reigning CMA Entertainer of the Year, will take the stage with his co-writers for exclusive performances of his latest chart-topping hits for an experience country music fans won’t find anywhere else. Tickets go on-sale today at 9 AM CT. For more information and to purchase tickets please visit https://www.bmi.com/feature/parkinglot/.

“We couldn’t be more excited to bring Luke Combs and his devoted fanbase to our parking lot for such an epic celebration,” says Clay Bradley, BMI’s VP, Creative, Nashville. “Being able to celebrate eight consecutive Number Ones all at once is a massive achievement, and we are so thrilled to honor Luke and the incredible songwriters who contributed to this truly remarkable milestone. What an incredible way to welcome everyone back to Music Row!”

Combs, who just announced his highly anticipated new studio album, Growin’ Up, will be released June 24, has enjoyed a record-setting twelve consecutive Number One singles at country radio over the course of his first two albums. The June 8 party will celebrate the unprecedented seven chart-toppers from 2019’s What You See Is What You Get (“Beer Never Broke My Heart,” “Even Though I’m Leaving,” “Does To Me,” “Lovin’ On You,” “Better Together,” Forever After All”  and “Cold As You”) as well as “Beautiful Crazy” from the deluxe version of his debut album, This One’s For You Too.

BMI’s Parking Lot Party is the latest in a longstanding relationship between BMI and the award-winning songwriter. Combs first joined BMI in 2013 and has since won 11 BMI Country Awards, performed on the 2017 BMI ACL Festival stage, traveled to the Key West and Maui Songwriter Festivals, and performed at the 2018 BMI Country Awards in honor of Icon Steve Cropper. The 6x CMA, 3x ACM, and 3x Billboard Music Award-winner also recently made history as the first artist ever to have their first two studio albums spend 25 weeks or more at #1 on Billboard’s Top Country Albums chart. The accomplishment came as What You See Is What You Get topped the chart for the 25th time, while his 2017 debut, This One’s For You, has spent 50 non-consecutive weeks at #1.

Proceeds from the event will benefit the BMI Foundation, a nonprofit that since 1985 supports the creation, performance, and study of music through awards, scholarships, grants, and commissions.