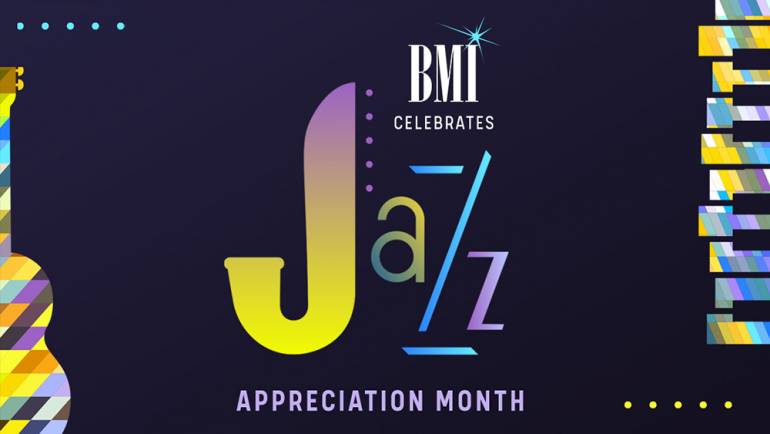 During the month of April each year, BMI is proud to honor Jazz Appreciation Month by recognizing the exceptional heritage, history and future of jazz. Over the decades, so many of our talented composers have been making their mark as they drive forward the evolving genre - mixing styles, improvising rhythms and fusing sounds. Several of our composers have even gone on to be awarded the highest jazz honor our nation offers, NEA Jazz Master, which is bestowed upon them by the National Endowment for the Arts. Among these legendary names are greats such as Herbie Hancock, Dave Brubeck, Joanne Brackeen, George Benson, Miles Davis, Sarah Vaughan, Jimmy Heath, Sheila Jordan, and this year’s newest Masters, Terri Lyne Carrington and Albert “Tootie” Heath.

As the National Endowment for the Arts extends this indelible honor to Carrington and Heath, the NEA celebration, presented in conjunction with SFJAZZ, includes an online tribute concert showcasing their exceptional contributions to the history of jazz. Starting April 24th at 8pm ET, the concert is free to watch, with no registration or tickets required. Check it out here!

Terri Lyne Carrington has remained a powerhouse drummer in jazz since the 1980s but has also vigorously turned her attention over the last 15 years to empowering the next generation. With outstanding versatility, she excels as a composer, bandleader, producer, and educator. Additionally, she is the founder and artistic director of the Berklee Institute of Jazz and Gender Justice, created to address gender equity in the jazz field and the role that jazz can play in the comprehensive struggle for social justice.

With a grandfather and father who were musicians, Carrington grew up with jazz around her. She started her professional career in Massachusetts at ten years old when she became the youngest person to receive a Boston Musicians’ Association union card and played her first professional gig with Clark Terry (becoming his regular drummer in 1983). She was offered a full scholarship to Berklee College of Music at the age of 11 after being heard jamming with Oscar Peterson.

Carrington moved to New York City in the 1980s, quickly emerging as an in-demand drummer. In 1989, she moved to Los Angeles, where she gained recognition on late night television as the house drummer for both the Arsenio Hall Show and Quincy Jones’ VIBE TV show. Her debut Grammy-nominated album, Real Life Story, was released in 1989 also.

After touring with Wayne Shorter and Herbie Hancock for much of the 1990s, she pursued a solo career. Her recording history involves a complex and inventive merging of jazz with other styles, such as funk-fusion and rhythm-and-blues, and her recording projects involve many of the artists with whom she has worked previously. The Mosaic Project featured a cast of all-star women instrumentalists and vocalists, including Geri Allen, Dee Dee Bridgewater, Dianne Reeves, and Esperanza Spalding. Her next recording was a radical revision of the 1963 recording Money Jungle by Duke Ellington, Charles Mingus, and Max Roach. She won GRAMMY Awards for both albums, including Best Jazz Instrumental Album for Money Jungle, the first woman to win in this category. In 2019, she continued her experiments in genre-blending with a political undercurrent on Waiting Game, a triple-crown winner of the Downbeat Critics polls.

In addition to producing and performing on her own albums, she has performed on more than 100 recordings and has produced other artists’ projects, including saxophonist Tia Fuller’s album Diamond Cut in 2018 and Dianne Reeves’ Grammy-winning album, Beautiful Life, in 2014. She has received two honorary doctorates, from Manhattan School of Music (2020) and from Berklee College of Music (2003), as well as the prestigious Doris Duke Artist Award in 2019. She is also currently artistic director for Detroit’s Carr Center.

The youngest of the three Heath Brothers, Albert “Tootie” Heath is the consummate jazz drummer, playing with seemingly everyone from John Coltrane to Ethan Iverson and performing on more than 100 recordings. Well-versed in various styles of jazz—including avant-garde, bop, and swing—he also delved into R&B, such as his work in the 1980s with his nephew Mtume; studied improvisation in North Indian classical music; and has been praised for his ability to imbue his personality into any repertoire.

Self-taught, Heath received musical training from his father, a clarinetist in one of Philadelphia’s Black marching bands, as well as from his older brothers Percy and Jimmy (both NEA Jazz Masters), who were already establishing themselves in the jazz world. Still in high school, Heath was asked to accompany Thelonious Monk on the drums during his engagement at Philadelphia’s Blue Note Club. By 1957, he had moved to New York, where he had an auspicious recording debut with the legendary John Coltrane on his album Coltrane (and later played on Coltrane’s Lush Life). In 1958, Heath was the drummer for Nina Simone’s first album, Little Girl Blue.

Heath embarked on a career as a sought-after musician, playing with J.J. Johnson from 1958 until 1960 and then the Jazztet while also working as a sideman at Riverside Records. In the mid-1960s, Heath moved to Europe but continued to play and record with jazz greats in the United States and around the world, including Cannonball Adderley, Art Farmer, Benny Golson, Dexter Gordon, Johnny Griffin, and Clifford Jordan, as well as playing in Herbie Hancock’s band from 1965 to 1970. In the mid-1970s he returned to the United States, settling in Los Angeles, California, and performed and recorded with Yusef Lateef from 1973 to 1983. He was awarded a National Endowment for the Arts Jazz Composition Fellowship in 1974.

In 1975, he joined his brothers and pianist Stanley Cowell to form the Heath Brothers, a group that remained active until the passing of Percy Heath in 2005. During the mid-1990s he was the drummer in the Modern Jazz Quartet.

Heath was an instructor at the Stanford Jazz Workshop summer camps for middle and high school students for more than 30 years. He has conducted clinics and workshops and performed at colleges and universities nationwide. In 2018, he received a Lifetime Achievement Award from the Jazz Foundation of America. Living in Santa Fe, New Mexico, since 2013, Heath has immersed himself in the local jazz community.