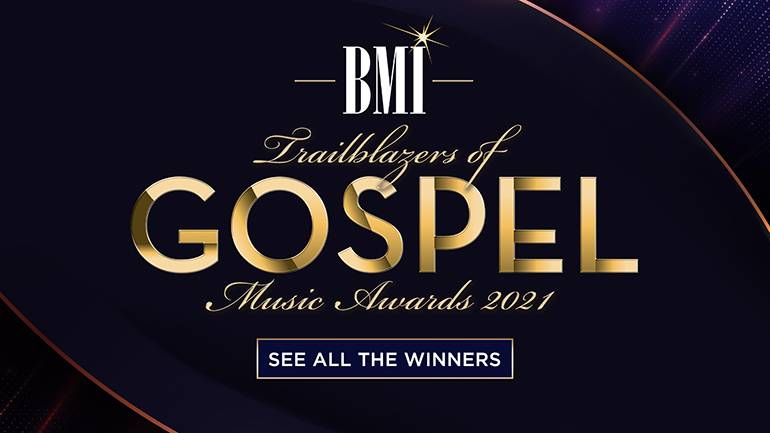 BMI is proud to celebrate the 2021 BMI Trailblazers of Gospel Music Awards, honoring some of today’s legendary and rising Gospel music luminaries. The Gospel Song of the Year, Songwriter of the Year, Publisher of the Year and the 20 most-performed songs of the previous year were announced today on BMI.com and across the company’s social media platforms. In tribute to this inspiring generation of Gospel songwriters, BMI created a special page featuring uplifting performances and first-hand accounts of the songwriting process behind some of the award-winning songs, as well as special messages from the winners. To view this exclusive content and more, visit https://www.bmi.com/trailblazers2021.

“It is always an honor to celebrate BMI’s incredible community of Gospel music songwriters,” said Catherine Brewton, Vice President Creative, Atlanta. “Their artistry is a gift through which we find the strength to persevere in the face of adversity and the words to rejoice in moments of worship. Today we applaud their outstanding contributions to the genre, which continue to inspire so many with messages of love and hope.”

Kanye West was named Songwriter of the Year for penning three of the award-winning Gospel songs “Hands On,” “On God” and “Selah” from his highly celebrated ninth studio album Jesus Is King, which garnered top industry accolades from Billboard and the GRAMMYS. West collaborated with Gospel great Fred Hammond for the crossover track “Hands On,” which landed on Billboard’s Christian, Gospel, R&B Hip-Hop and Hot 100 charts. The record’s single “Selah” broke into the top 20 on Billboard’s Hot 100 and was nominated for Top Gospel Song at the 2020 Billboard Music Awards, competing against “On God” that same year. With this distinction, West earns his first three Trailblazer Awards, adding to his extensive collection of 38 BMI Awards from R&B/Hip-Hop, Pop, and London.

SONGWRITER OF THE YEAR

PUBLISHER OF THE YEAR

I Love Him
Renee Spearman
Contempo One Publishing

I Made It Out
Pastor John P. Kee
Ja Twan Publishing
Songs of Kobalt Music Publishing

Pull Us Through
Jermaine Dolly
By Any Means Necessary Ent.
Dollyology World LLC