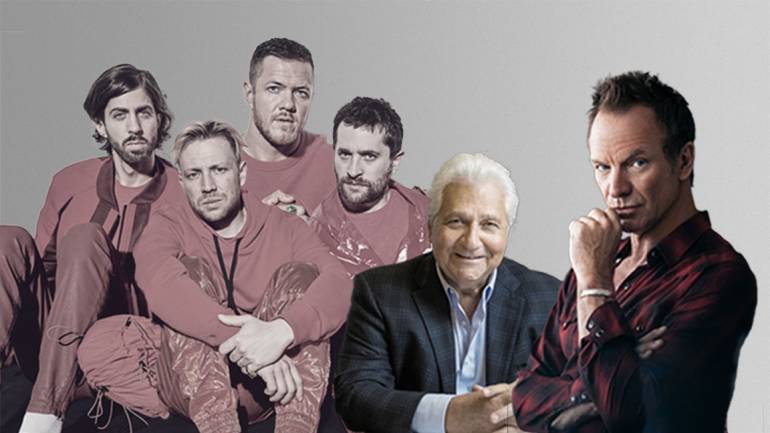 BMI is pleased to celebrate an evening of exceptional songwriting at its 67th Annual BMI Pop Awards.  In an event 22 years in the making, Sting, already a BMI Icon, will be honored for his enduring hit single “Every Breath You Take,” which has become the Most Performed Song in BMI’s catalog of over 14 million musical works.  The award ceremony will also celebrate multi-platinum GRAMMY Award-winning band Imagine Dragons with the BMI President’s Award, and Martin Bandier, legendary music publishing executive, will be named a BMI Icon, the first time a music publisher has been given this honor. The private event will be hosted by BMI President and CEO Mike O’Neill and Vice President Worldwide Creative, Barbara Cane and will take place on Tuesday, May 14, at the Beverly Wilshire Hotel in Beverly Hills, CA.

“We couldn’t be more excited for this year’s ceremony which honors the best of the best in pop music and celebrates songwriting at its finest,” said O’Neill.  “For the first time in 22 years, BMI has a new top song in our repertoire with Sting’s timeless hit ‘Every Breath You Take,’ a remarkable achievement that solidifies its place in songwriting history.  It’s a milestone that demands a special tribute.”  O’Neill added, “We are also thrilled to celebrate the groundbreaking artistry and creative vision of Imagine Dragons who have become one of the most compelling rock bands of the last decade and a most deserving recipient of our President’s Award.  And, when you think of music icons, Marty Bandier certainly falls within that category. BMI is thrilled to honor him for his indelible imprint on all facets of the music industry.”

The evening will also salute the songwriters and publishers of the past year’s 50 most-performed pop songs in the United States from BMI’s repertoire of more than 14 million musical works. The BMI Most Performed Pop Song, Songwriter of the Year and Publisher of the Year will also be named during the ceremony.

With nearly 15 million radio plays, Sting’s “Every Breath You Take” has become the Most Performed Song in BMI’s catalog, a distinction previously held by Mann and Weill’s “You’ve Lost That Lovin’ Feelin’” for the last 22 years. Written by Sting and performed by The Police, “Every Breath You Take” became a hit in 1983 before its 1995 resurgence with “I’ll Be Missing You” by P. Diddy, Faith Evans and 112. In 2016, Sting was honored as a BMI Icon and also accepted a BMI Million-Air Award to recognize 13 million combined radio plays at the BMI London Awards where he said: “…your real job as a songwriter is to provide a soundtrack to people’s emotional lives, touchstones for their emotional landscapes, their memories. And that’s an unexpected and unanticipated honor as well as a privilege.”  His new album, My Songs, will be released on May 24 and features a modern approach to some of his favorite hit songs, including “Englishman In New York,” “Fields of Gold,” “Shape of My Heart,” “Roxanne,” “Message In A Bottle,” “Every Breath You Take” and many more.

Imagine Dragons will receive the BMI President’s Award for their incredible creative accomplishments as well as their commitment to philanthropic efforts that bring awareness to social injustice. With more than 12 million albums and 35 million singles sold, Imagine Dragons have established themselves as one of the most successful and socially conscious bands of the last decade. The group uses its platform to bring awareness to many charitable causes and recently raised nearly $8 million to help fight childhood cancer for The Tyler Robinson Foundation, as well as $1 million for organizations that provide support to the LGBTQ community.  In receiving the BMI President’s Award, Imagine Dragons joins an illustrious group of previous recipients including Luis Fonsi, P!nk, Adam Levine, Taylor Swift, Kenny Chesney and Ludacris, among others.

Cane remarked, “As one of today’s most influential global artists, Imagine Dragons is transforming music and culture with riveting, dynamic and powerful songs. We’re thrilled to celebrate them as well as all of our other wonderful honorees.”

Martin Bandier will become the first music publishing executive to be named a BMI Icon. He will receive the award on behalf of songwriters and for his many contributions to the industry at large. Throughout his career, Bandier has been a trailblazer in the industry and a tireless advocate for songwriting rights, leading the fight for fair-market royalty rates. Under his leadership, Sony/ATV became the largest music publisher in the world and home to some of the biggest names in music including BMI songwriters Taylor Swift, Lady Gaga, Ed Sheeran, P!nk, Carole King and Sting. Other BMI Icon recipients include Stevie Nicks, Barry Manilow, Barry Mann and Cynthia Weill, David Foster, Carole King, Hall and Oates, The Bee Gees, Chuck Berry, Brian Wilson and many others.

STING: Since forming The Police in 1977 with Stewart Copeland and Andy Summers, Sting has evolved into one of the world’s most iconic artists, selling 100 million records and earning many of the industry’s highest accolades both as a member of The Police and as one of the most distinctive solo artists of our time. These honors include 17 GRAMMY Awards, more than 30 BMI Awards including the BMI Humanitarian Award (1997) and the BMI Icon Award (2016), four Brits, a Golden Globe, an Emmy, four Oscar nominations and induction into The Rock and Roll Hall of Fame, among many others. His new album, My Songs, will be released on May 24 with a summer tour kicking off in Paris on May 28.  The collection of songs will feature a modern approach to some of his favorite songs, including “Englishman In New York,” “Fields of Gold,” “Shape of My Heart,” “Roxanne,” “Message In A Bottle,” “Every Breath You Take” and many more.

IMAGINE DRAGONS: Since forming in 2009, lead vocalist Dan Reynolds, guitarist Wayne Sermon, bassist Ben McKee and drummer Daniel Platzman of Imagine Dragons have emerged as one of the biggest and most compelling rock bands in the world.  The group burst on the music scene in 2012 with its first full- length album Night Visions, featuring hits “It’s Time,” “Demons” and “Radioactive,” which won the band a GRAMMY for best rock performance. The band has gone on to release three more studio albums, Smoke + Mirrors (2015), Evolve (2017) and Origins (2018). That same year, the band became the first act to keep four songs on the Billboard charts for a full year, including the massive hit “Thunder,” which peaked at No. 4 on the Billboard “Hot 100″ chart in 2017 and has more than 1.1 billion views on YouTube. The celebrated group has also received many accolades including three American Music Awards, nine Billboard Music Awards, six BMI Awards for “Most Performed Song of the Year,” a GRAMMY, an MTV Video Music Award and a World Music Award.

MARTIN BANDIER: Martin Bandier’s involvement in the music industry dates back to 1975 when he co-founded The Entertainment Company. In 1989 he was appointed the head of the combined music publishing division at EMI Music Publishing, which he ran for more than 17 years. Under his leadership, EMI Music Publishing became the world’s largest and most successful music publishing company by acquiring the rights to some of the most famous songs ever written and signing many top songwriters and artists. Bandier later assumed the position of chairman and CEO of Sony/ATV Music Publishing in 2007 and oversaw its global music publishing activities, including talent and copyright acquisitions, day-to-day operations, and the development and implementation of the company’s long-term strategic initiatives. His civic and industry commitments include membership on the boards of the City of Hope, the Songwriters Hall of Fame and the NMPA. He also serves as a trustee for the T.J. Martell Foundation and was elected to be a MusiCares Director for both the GRAMMY MusiCares foundations. Bandier’s numerous industry achievements include receiving the BMI Pop Publisher of the Year multiple times, The Songwriter Hall of Fame’s prestigious Patron of the Arts Award and a Lifetime Service Award in June 2017 from the National Music Publishers’ Association, among many others.