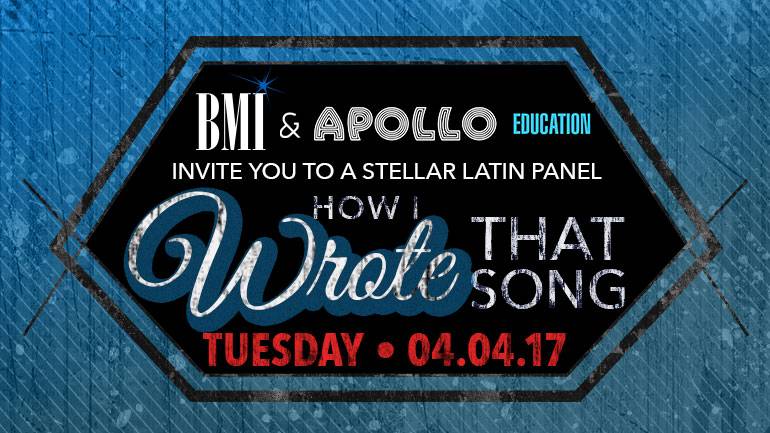 BMI and the Apollo Theater are partnering to present BMI’s renowned ‘How I Wrote That Song’ panel at the legendary Harlem Theater. The panel discussion, which is also presented as part of the Apollo Theater Education Career Panel series, will provide an opportunity for aspiring songwriters and composers to learn about the craft of songwriting from today’s Latin music hitmakers. This event is open to the public and free of charge, and will take place on Tuesday, April 4, 2017, at the iconic Theater. Doors open at 5:30 p.m.

BMI’s ‘How I Wrote That Song’ celebrates chart-topping and aspiring singer-songwriters and producers and serves as a platform for panelists to discuss the process of writing, producing and performing hit songs. The informative and entertaining panel will include some of the industry’s most talented Latin music creators of today. Featured panelists include 24 Horas, El Dusty, Pinto “Wahin,” A&X’s Xtassy, David Escobar and Ana Isabel. Isabel will also be acting as moderator for the panel.

The Apollo Theater Education Program extends the Theater’s commitment to serve as a resource and gathering place for the entire community. The nonprofit Theater’s education programs include events for school children and families; career development for teens and adults through the Apollo Theater Academy; and discussions on cultural and civic issues important to the Harlem community that highlight the history of the Apollo and its impact on American art, culture, and entertainment. Apollo Career Panels feature interviews and discussions with theater, music and media industry professionals.

Anyone interested in attending should RSVP at the following link
https://apollocareerpanel_bmilatin_hiwts2017.eventbrite.com

24 Horas are a bachata trio from New York City who began topping the tropical charts in 2010 with their debut single, “24 Horas.” Hailing from Washington Heights, a predominantly Dominican neighborhood in Manhattan, the duo is comprised of Mickey Then (born Jonathan Then) and Joell Jaquez (born Rodolfo Jaquez). Their 2010 album debut Los Inolvidables was released on Machete Music, spawned a pair of chart-topping tropical smashes, “24 Horas” and the Top 30 hit “Mami Dame un Beso.” The one-off single “Duele Duele” followed in 2011. Their new album TIEMPO marks their return and already “Aun Me Perteneces” reached Top 10 on the Billboard Tropical Airplay chart and “Por Tu Culpa” reached #1 on the BillboardTropical Airplay chart.

Corpus Christi based Latin Grammy nominated producer, Dusty ‘El Dusty’ Oliveira is considered by some to be the inventor of Cumbia Electronica, as he was feeding cumbia into his sound processor and synthesizer before the turn of the millennium. Operating behind the mixer and console, what Lee Scratch Perry is to Reggae, Dusty is to cumbia. Cumbia is the sound he reps, with a unique take on bass music that merges the sound of hip-hop, trap and Latin rhythms for something that is insanely danceable and fun. His mixes jump tempos by switching from half-time slumpers to Latin house, to full on salsa at some points then back to groovy dance hall often leaving audiences captivated.

Pinto “Wahin” is a Latin GRAMMY Award-winning engineer, songwriter, philanthropist and internationally renowned, retired professional soccer player from Spain. After making a name for himself as a celebrated goalkeeper for some of the most prolific soccer teams in the history of the sport, Pinto is making headlines for his flourishing career as a musician under his label, Wahin Makinacione. Wahin’s boundless talents and versatility have scored him recording credits on projects for some of the most talented vocalists in Europe and Latin America, and now with blockbuster Hollywood films. The star-studded soundtrack of The Fate of the Furious, the eighth installment of The Fast & Furious franchise, hitting theaters on April 14, features a track by Pinto “Wahin” and DJ Ricky Luna, La Habana (also featuring El Taiger). Additionally, his song, “Papi, Papi,” can be heard during a scene in the hit film, Ride Along, starring comedian Kevin Heart.

Xtassy is one half of the Dominican Republic-born hitmaking production team A&X, comprised of Alcover (Milton “Alcover” Restituyo) and Xtassy (Juan “Xtassy” Abreu), who were raised in New York. Xtassy and Alcover are among the top songwriters and producers in Latin Music; their creativity has earned them recognition across genres and is swiftly gaining worldwide acclaim. Xtassy joined forces with Alcover in New York and together have shown that the combination of their talents is unique and has given them the opportunity to work with several artists internationally. Their musical adventures, dedication and preparation have continued to contribute to their ascent as top producers, songwriters and hit makers and have garnered them major hits including Don Omar’s #1 smash hit “Dutty Love” and many more.

David Escobar’s relentless passion for music is what led him to his career as a singer/songwriter. As the founder and lead singer of his Latin pop-rock band called Zona Rosa, David took every opportunity to perform at bars, nightclubs, and even well-known venues such as the Prudential Center, Citi Field and Radio City Music Hall alongside artists such as Ricky Martin, Juanes, Juan Luis Guerra, and Alejandro Sanz. In 2012 David got together in the studio with NY’s La Mega DJ Alex Sensation and wrote the Spanish version of the Brazilian song “Balada Boa”by Gusttavo Lima, which became Alex’s first radio hit, “Noche de Placer.” David’s breakthrough as a songwriter came with Alex Sensation’s latest mega hit, “La Mala y La Buena,” that reached #1 on Billboard’s Tropical Songs chart.

Ana Isabel is a singer, actress, and Puerto Rican dancer recognized as a young star. In 2010, Billboard added her to their artist to watch list, and soon thereafter her career propelled. She’s garnered multiple radio hits in various Latin American Markets and has millions of video views on YouTube. Her vocal versatility ranges from singing alongside artists such as Plácido Domingo, David Bisbal, Luis Fonsi to Demi Lovato and Canada’s K-nan. She has also secured roles alongside Golden Globe and Academy Award nominated actors, starred on Broadway and secured national commercials for the NBA. Isabel is continuing her stellar acting success and preparing to release new music in 2017.