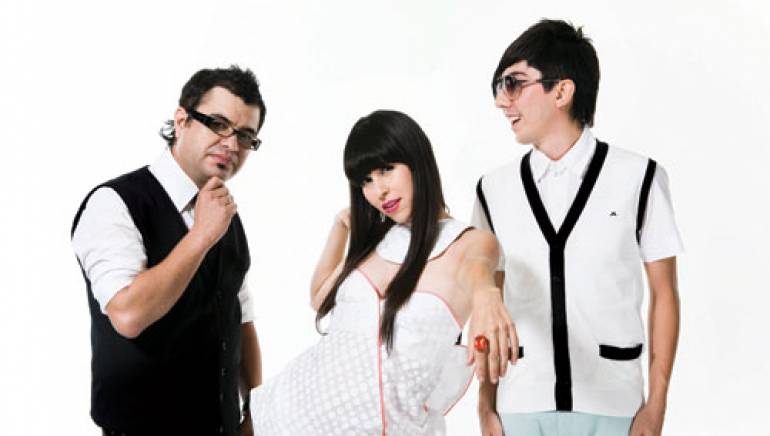 The trio Belanova has been touring north of the border this summer, importing their sprightly synth pop stage show extravaganza — titled “Fantasia Pop USA Tour” — to a host of cities from New York to Los Angeles and select points between. As fans of the band will enthusiastically testify, Belanova’s bouncy dance rhythms and feel-good lyrics are the perfect combination for sunny weather and celebratory vibes.

Comprising lead vocalist Denisse Guerrero, programmer and keyboardist Edgar Huerta, and Ricardo “Richie” Arreola on bass (accompanied by a drummer in concert), the triumvirate first convened in 2000. Their CD debut, Cocktail, recorded for the Universal Music dance imprint Virus Records, contained the single “Tus Ojos,” featured in a Mitsubishi publicity campaign to announce the Japanese car company’s arrival in Mexico. Highlighted by two additional singles, “Suele Pasar” and “Aún Asi Te Vas,” Cocktail reached gold status as the album was named one of the Top Five releases of 2003 by Rolling Stone Mexico. A 100-city tour of Mexico capitalized on this success, introducing the trio’s energetic stage show to appreciative audiences.

Changing over from Virus to parent company Universal, the band recorded a follow-up, Dulce Beat, in Argentina with producer Cachorro López, who is perhaps best known for his brilliant work with Julieta Venegas. Embraced by MTV Mexico, Dulce Beat, bolstered by the singles “Me Pregunto,” “Por Ti” (that logged a record-setting 29 weeks atop MTV Mexico’s Top 20 chart) and “Rosa Pastel,” was so successful that the group created Dulce Beat 2.0 and added a bonus disc of acoustic versions and remixes. Next, Dulce Beat Live, 16 songs performed at the Foro Expo in Guadalajara, went gold only hours after its Mexican release. In 2006, the band earned a Latin Grammy nomination for Best Pop Vocal Album by a Group or Duo, as Belanova became the most nominated Mexican act on the 2006’s MTV Video Music Awards Latin America. Disney Latin America subsequently selected the band to record the Spanish version of the song “What I’ve Been Looking For” (“Eres Tú”) for the Latin American release of the High School Musical soundtrack and Belanova signed a contract with Pizza Hut Mexico to promote the chain’s Cheesy Pops with their single “Niño.”

Fantasía Pop, their third release, entered the Mexican charts at number 18 before climbing to number one three weeks after release. It was also their first gold record in the U.S. as the album’s singles, “Baila Mi Corazón” and “Cada Que…” went on to sell over 200,000 downloads in the United States alone. When the album was certified platinum in March 2008 in Mexico, the band made history when it was revealed that digital sales of the album were five times the 100,000 copies that were sold physically.

Their U.S. success is a crucial component to the band’s continued rise as it confirms once again that music can cross borders, barriers, languages and locales when it makes the audience get up and dance.