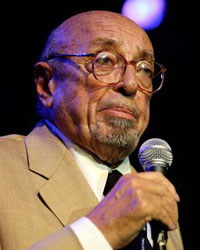 Ahmet Ertegun, the founder of Atlantic Records who helped shape the careers of Ray Charles, Aretha Franklin, the Rolling Stones, Led Zeppelin and many others, died Dec. 14 at the age of 83.

Ertegun, who remained connected to the music scene until his last days, had been in a coma since Oct. 29, when he suffered a brain injury after falling backstage at New York's Beacon Theatre during a Stones concert in honor of former President Bill Clinton's 60th birthday.

"With the passing of Ahmet Ertegun, the music industry has lost a true giant," said BMI President & CEO Del Bryant. "In addition to his indelible contribution to the careers of artists whose music has virtually defined two generations, he was also a distinguished member of the BMI family for the past 53 years, with 16 BMI R&B Award winners in his catalog, including the oft-covered 'Chains of Love.' His many friends at BMI are deeply saddened by his loss."

Born in Istanbul on July 31, 1923, Ertegun was the son of a Turkish ambassador. He started collecting records for fun, but would later became one of the music industry's most powerful figures with Atlantic, which he co-founded in 1947 in an office in a derelict hotel on West 56th Street in Manhattan. His initial investment of $10,000 was borrowed from his family dentist.

The label first made its name with rhythm and blues by Charles and Big Joe Turner, but later diversified, making Franklin the Queen of Soul as well as carrying the banner of British rock (with the Rolling Stones, Cream, Led Zeppelin) and American pop (with Sonny and Cher, Crosby, Stills, Nash & Young, and others). Today, the company is part of Warner Music Group, home to artists including Kid Rock, James Blunt, T.I. and Missy Elliott.

Ertegun will be buried in a private ceremony in his native Turkey; a memorial service will be held in New York after New Year's.