Posted in MusicWorld on May 18, 2012 by Jon Burlingame 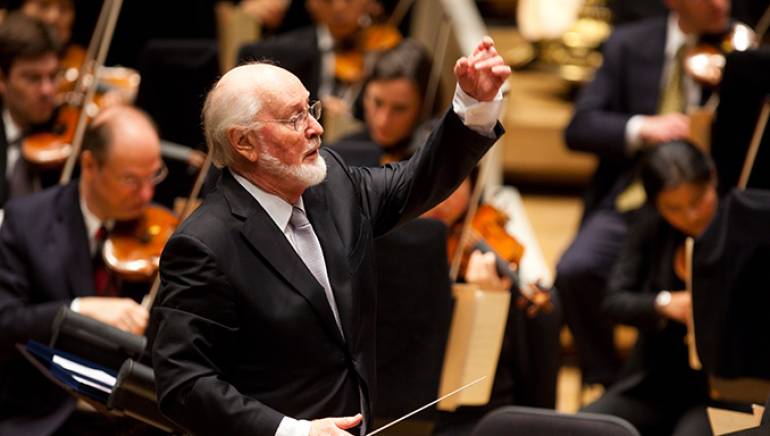 As much as any composer alive, John Williams has written the musical soundtrack of our lives. Earlier this year, the five-time Academy Award winner turned 80; yet he shows no signs of slowing down.

Williams received two more Oscar nominations this year — for his scores for the Steven Spielberg films War Horse and The Adventures of Tintin — which brings his total to 47, the most of any living person (and second only to Walt Disney overall). He is currently working on the music for Spielberg’s next film, Lincoln, starring Daniel Day-Lewis as the 16th president. With a nod to the president’s Illinois expe¬riences, he plans to record the score with the Chicago Symphony Orchestra.

Despite a track record that includes some of the most familiar movie melodies of the past several decades — Jaws, Star Wars, Superman, Raiders of the Lost Ark, E.T. the Extra-Terrestrial, Harry Potter and more — Williams has no intention of retiring or resting on his considerable laurels. There is always another assignment just around the corner.

For the past six years, apart from his concert work and the occasional TV assignment, he has worked exclusively for Spielberg (on such films as Munich, the fourth Indiana Jones film and the two recent Oscar nominees), his filmmaking partner since The Sugarland Express nearly 40 years ago.

“We’ve never really had an argument,” Williams says in a comfortable studio at Amblin, Spielberg’s Universal City complex where the composer works. “The variety of things that he’s asked me to do — all ends of the musical spectrum — has given me continued, and always renewed, interest. It’s never the same.”

The last two films offer a perfect example: War Horse, a drama that begins in Dartmoor, England, just before the outbreak of World War I; and Tintin, an animated romp based on the famous Belgian comic strip about a young reporter and his spunky dog. “They really couldn’t be more different,” Williams says. For War Horse, Williams drew inspiration from early 20th-century composers working in the English pastoral style; for Tintin, he paid homage to the cartoon composers he recalled from his youth and “the virtuosity of the playing of the orchestras” in that earlier era, which he attempted to duplicate with more than 90 top-flight Hollywood musicians.

After completing Lincoln, Williams will shift his focus to live performances this summer with the Boston Pops, for which he is Laureate Conductor. He served from 1980 to 1993 as its music director and, he says, “After 30-plus years with the orchestra, it’s like a family, with a new generation. It’s a huge part of my musical life.” He will also make his annual end-of-sum¬mer stop at the Hollywood Bowl, conducting the Los Angeles Philharmonic.

Over more than half a century of writing music for films, TV, special events (such as the Olympics) and the concert hall, are there a handful of memorable moments?

“The first time I saw Jaws,” Williams recalls, “I was alone in the room, having no idea what to expect. I remember the impression to this day of what a magnificently engineered piece of work that was, with the boats, the water, the weather and the tension that was created.”

He also cites favorite collaborations with violinist Itzhak Perlman and cellist Yo-Yo Ma, especially on Memoirs of a Geisha, and “so many great moments on the podium with orchestras in L.A. and London — all those Star Wars films, Superman, Harry Potter … great friends and great players.”

Despite his public profile, Williams is a shy and self-effacing man who deflects ques¬tions about his legacy or how he’d like to be remembered. Instead, he talks about the future of music in America: “I would love to be here 30, 40 or 50 years from now. The students in our conservatories are so fantastically good. The best symphony orchestras in the world are in this country; that’s a great success story for us. If we can manage as brilliantly in our governance as well as I know these kids will do in music, we’re go¬ing to have a much better world and an at¬mosphere where good work is appreciated.”