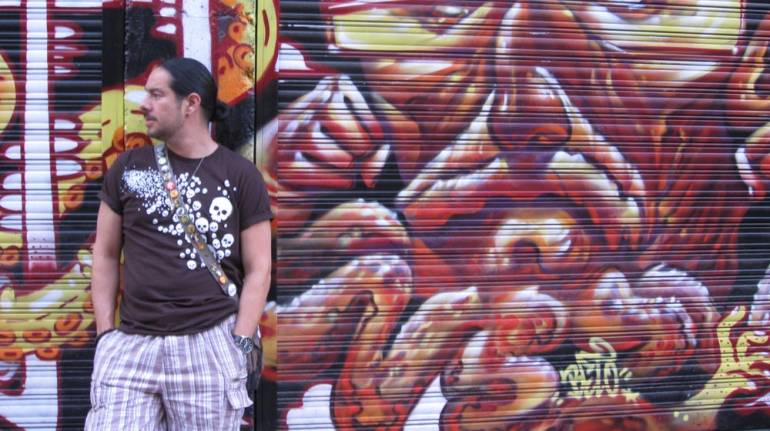 Songwriter, master percussionist, producer and musical ambassador: Archie Peña is a whirlwind of kinetic creativity. A two-time BMI Award-winning songwriter and the co-writer of hits including “Hips Don’t Lie,” (Shakira); “Se Me Olvido Tu Nombre” (Shalim); “Te Quise Tanto” (Paulina Rubio); “No, No, No” (Thalia and Aventura), the Venezuelan-born Miami resident is also a seven-time Grammy-nominated producer. Having just concluded a successful decade-long affiliation with Emilio Estefan, Peña is now producing a diverse roster of artists including Amelia Vega, who was crowned Miss Universe in 2003 and is also the cousin of Dominican superstar Juan Luis Guerra.

“There are a lot of things to achieve in a very small period of time,” notes Peña. “Now that I’m doing all projects on my own, starting from scratch, it just feels incredible. Miami is full of excitement, and things happen on a daily basis. It’s also a place for big stars to do their albums or come and enjoy a couple of days in pre-production: artists like Jay-Z, Beyoncé, Pharrell, and Wyclef Jean. I’ve been lucky enough to do some work for them. If they want to come up with new sounds, they’ll call and have me bring in some instruments to get them in the mix. It’s what I do also – I get very different sounding instruments on my productions.”

As a percussionist, Peña has performed and/or recorded with Shakira, Ricky Martin, Jon Secada, Jennifer Lopez, Marc Anthony, Gloria Estefan, Madonna and Whitney Houston, appearing on more than 300 albums. “I travel all over, China, India, Latin America and Europe. I’m always feeding myself with a lot of different instruments and I have a garage full of them. I bring back weird violins and wind instruments. I learn a little bit and blend them into my productions. Most of what I play is percussion, but I’m fascinated with world music and world instruments. I’m always trying to incorporate these into different songs and beats and rhythms. That’s what keeps me in line, and happy, and believing in new possibilities.”

Peña, who recorded a project titled Miami to Mumbai with Dhrubajit Gogoi, maintains close ties to India, where he visits regularly to record and perform. “I played with 100 percussionists from Calcutta and Mumbai, and this time they will be from two additional regions,” Peña says. “I believe the world is a way smaller place than we think. We should make it smaller, and make ourselves more available, with open minds to new possibilities.”

As a co-writer, Peña avows that the collaborative chemistry is created by “…just getting in the room and vibing with a beat. My favorite is working with only a guitar and coming up with some ideas. I’m a fanatic of organic, but there are many ways. In the studio I can pull up a beat and vibe. But first, I need to feel the beat; it has to move and to come from the heart. You have to be able to dance to anything I do. And it has to make me move before I can put lyrics on it. In our bodies, the heart is what makes the beat. The drum is the heart of music. For me, the groove has to be the beginning of any possible creation.”